President Donald Trump held his first-ever socially distanced rally in Minnesota Friday – and fumed that the Democratic governor of the state forced him to limit attendance to 250 people, calling it a ‘disgrace.’

He spoke for just 21 minutes, far less than his typical outdoor rallies, and his remarks made evident that his primary purpose was to bash the state’s leadership for not allowing him to have the full rally he wanted.

‘Remember what your governor did this evening. And it’s a small thing but a horrible thing to thousands and thousands of people that are outside that could be here,’ Trump said near the end of his speech.

President Donald Trump speaks to an overflow crowd before going to a campaign rally at Rochester International Airport, Friday, Oct. 30, 2020, in Rochester, Minn.

‘We could all be here together. A horrible thing that they did,’ he vented.

Trump arrived on Air Force One Friday for yet another of his outdoor events, where crowds of a few thousand usually cheer with the plane as a backdrop.

Before the rally began, after hyping the confrontation all day, Trump first walked over to supporters who lined up outside the official venue at what the campaign called a ‘peaceful protest.’

‘You’ve got 25,000 people it’s a disgrace, so we’re going to go speak to 250 people,’ Trump complained, although there was no indication there were that many gathered.

Trump said cars were backed up for three miles trying to get to the event, but it was hard to substantiate his 25,000 boast.

A pool reporter traveling with the president wrote that the overflow crowd ‘may very well be larger than the rally crowd itself.’

‘We’re going to win Minnesota. But this should be a lesson. He wants to silence people,’ Trump said of Democratic Gov. Tim Walz in remarks to the pool with the overflow visitors. ‘The governor doesn’t know what he’s doing,’ Trump said before driving in the presidential limo to deliver his remarks at a lectern. 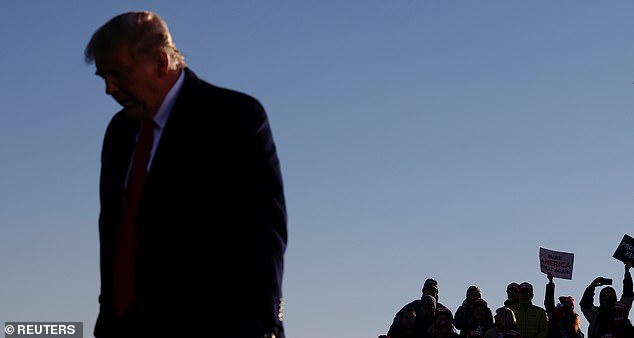 Supporters were fenced off and spaced apart Trump trails Biden in polls in a state Hillary Clinton carried narrowly. It was his third rally of the day President Donald Trump steps off of Air Force One as he arrives for a campaign rally at Rochester International Airport October 30, 2020 in Rochester, Minnesota Trump raged at COVID restrictions imposed on the event Supporters of US President Donald Trump attend a campaign rally at Rochester International Airport in Rochester, Minnesota on October 30, 2020 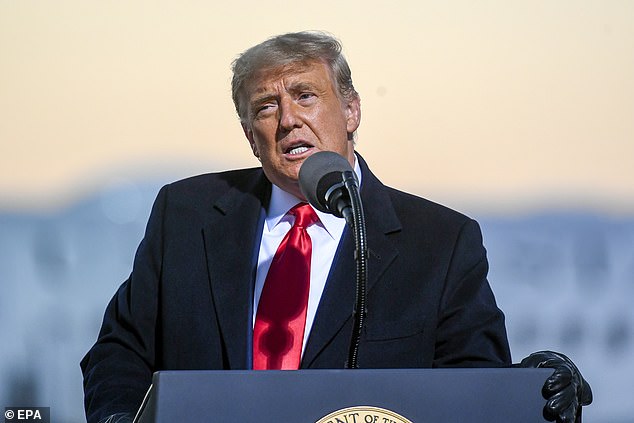 ‘They ban you from going to church while they let left-wing extremists burn down the church,’ Trump said of Joe Biden and state attorney general Keith Ellison

By the time he did speak, it was getting dark, limiting the opportunities for picturesque shots at sunset in front of the storied presidential aircraft. There were also problems with the audio, which kept TV viewers from hearing parts of the speech.

Trump repeated some of the same remarks to the people provided white folding chairs at the rally. Trump has repeatedly mocked rival Joe Biden for events where supporters and press are seated inside circles to keep them apart.

‘The governor did bad things,’ he said. ‘Your far-left Democratic Attorney General Keith Ellison and your Democrat governor tried to shut down our rally, silence the people of Minnesota and take away your freedom and your rights,’ he said.

‘They thought he would cancel – a word they are very familiar with cancel, cancel culture,’ he said.

‘But I said no way I will never abandon the people of Minnesota,’ Trump said.

He said he flew over a line of cars that went for miles. ‘What a shame. They waited here for a long time,’ he said.

Trump also complained about what might have been in 2016, lamenting he didn’t stage another visit to try to beat Clinton there.

The rest of his remarks consisted of attacks on Joe Biden and efforts to tie him to radical elements.

‘Keith Ellison and Joe Biden want to imprison you in your homes while letting anarchists, agitators and vandals roam free,’ he claimed.

‘They ban you from going to church while they let left-wing extremists burn down the church,’ he said.

It was a stark contrast with how Biden presented himself in a visit to St. Paul just minutes earlier.

‘Protesting and burning and looting Is not protesting. It’s violence, clear and simple, and will not be tolerated,’ Biden said. 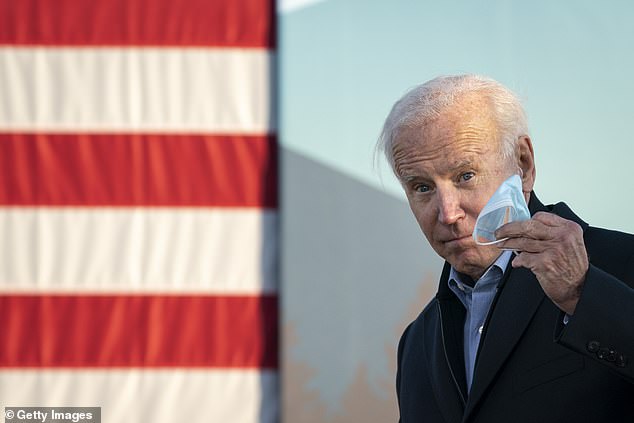 He also touted support from military brass like Admiral William McRaven, who oversaw the raid that killed Osama Bin Laden.

‘That’s why we have to support the military – they’re the backbone of the country. So let them vote and let’s vote for them,’ Biden said.

Missing from Trump’s were the long off-script digressions that Trump crowds have grown to appreciate – including shout-outs to his family, descriptions of the Oval Office, the White House and Air Force One, talk about trade deals and building up the military, or even running through impeachment and investigations as he did earlier in the day.

Also missing were crowd cheers of ‘lock him up’ and other call-and-response.

Trump spoke in a state that like many of its neighbors is experiencing a wave of infection. There are more than 2,600 people in Minnesota intensive care unit facilities, according to the state health department.

Trump is hoping Minnesota, another part of the Democrats’ so-called ‘blue wall,’ will flip his way this time. Hillary Clinton narrowly carried the state in 2016, but polls have consistently showed Joe Biden ahead. Biden’s lead was 5 points in the latest RealClearPolitics average.

At the formal rally, guests were separated behind barricades covered in red, white and blue bunting.

Trump’s campaign makes masks available, but does not require them.

Supporters clapped at applause lines, but it was nothing like the screams of support Trump yearns for at his large-scale events, like another he had in Bemidji and Duluth.

The event was first planned for the airport, then moved to a private company, then switched back. State officials were requiring the size be limited in line with COVID-19 social distancing restrictions..

Testing in Wisconsin alone found 5,096 new cases, the second time in the past week the state reached more than 5,000 cases in a single day. The state’s record, which was hit Tuesday, is 5,262.

At his Michigan rally earlier, however, Trump falsely pushed that the numbers were inflated thanks to greedy doctors.

‘You know, our doctors get more money if someone dies from COVID, you know that right?’ Trump told the crowd. President Donald Trump held a rally Friday in Wisconsin, a COVID-19 hotspot. While supporters sat masked behind the president, a majority in the crowd weren’t wearing masks to prevent the spread of the coronavirus

Wisconsin saw more than 5,000 cases per day twice in one week, as it’s become a COVID-19 hotspot 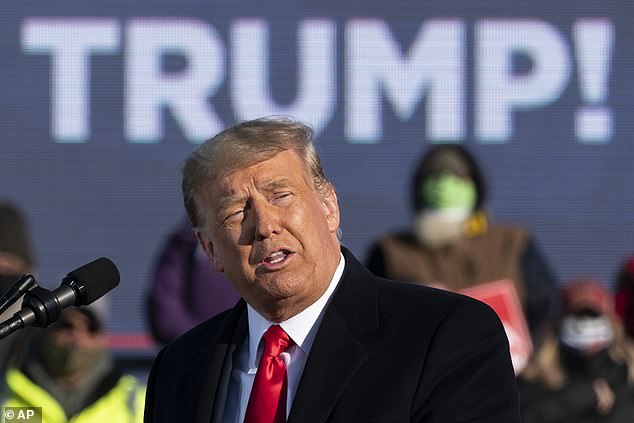 President Donald Trump speaks in Green Bay, Wisconsin – a state that has become a COVID-19 hotbed Supporters, a majority of them un-masked, take photos of President Donald Trump in Green Bay, Wisconsin on Friday

‘Our doctors are very smart people.’

He claimed that in other countries, like Germany, if someone has cancer and gets the coronavirus, their cause of death is still cancer.

‘With us, when in doubt, choose COVID,’ Trump said.

In Wisconsin, Trump continued to tout his administration’s response to the pandemic, saying ‘we’ve done a good job.’

‘With or without the vaccine we’re rounding the turn,’ he pledged.

Trump, however, could be contributing to the uptick in COVID-19 cases hosting mass gathering after mass gathering, with most of his supporters standing in close confines outside mask-less.

The president announced Friday that he’ll hold an additional 14 rallies from Saturday through Monday.

The president touted the fact that they outside, suggesting because of this, he was taking virus transmission seriously.

‘I actually like this stuff better,’ he said, meaning the outdoor rallies. ‘On a day like this, it’s so beautiful.’

‘Is there any place better to be than a Trump rally?’ he asked the Wisconsin crowd.

At the first rally, he made fun of Fox News Channel’s Laura Ingraham, who is tagging along with him through three states, for her mask-wearing. President Donald Trump addressed a crowd at Oakland County International Airport, in Waterford Township, Michigan on Friday, where he complained about Fox News Channel and made fun of Fox News’ Laura Ingraham for wearing a mask 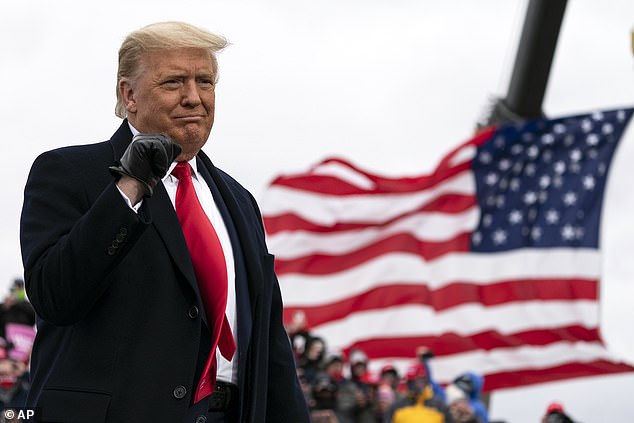 President Donald Trump railed against Fox News Channel at the Oakland County International Airport in Waterford Township, Michigan on Friday. He also made fun of Fox News host Laura Ingraham, who was in the crowd, for wearing a mask 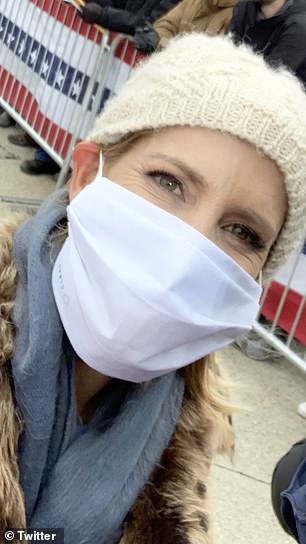 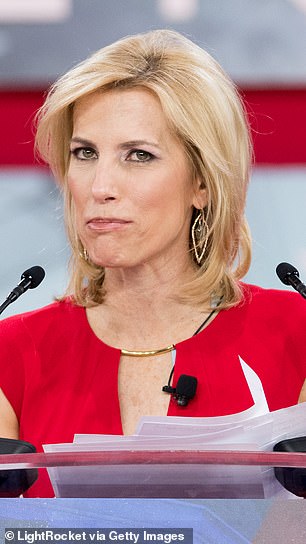 Masked Fox star: Laura Ingraham was mocked by the president for wearing a mask as she stood in a VIP area of the Michigan rally. Her mask appears to have come from the Clear company at an airport. Housing and Urban Development Secretary Ben Carson (left), a retired neurosurgeon, and his wife Candy (right) were in Trump’s Michigan crowd, not wearing masks. The Carsons were born and brought up in Detroit President Donald Trump tosses a ballcap into the crowd during his first rally Friday in Michigan. He’ll head to Wisconsin and then Minnesota for two more events through the day Off to Wisconsin: Air Force One takes off for the next stage of Trump’s latest mid-western swing Not a lot of masks: As has become customary at Trump rallies, there was no social distancing and – with the exception of some of those directly behind him and Laura Ingraham – little sign of mask wearing Arrival: Trump was ready for colder temperatures than his last rally in Florida ‘I can’t recognize you. Is that a mask? No way, are you wearing a mask?’ he shouted to Ingraham. ‘I’ve never seen her in a mask.’

‘Look at you, Laura, he went on. ‘She’s being very politically correct. Whoa! Whoa!’ Trump added.

Housing and Urban Development Department Secretary Ben Carson, a retired neurosurgeon, and his wife Candy were in the Michigan crowd.

Ingraham was photographed in a mask with a presidential seal at Trump’s second rally of the day, in Green Day, Wisconsin. 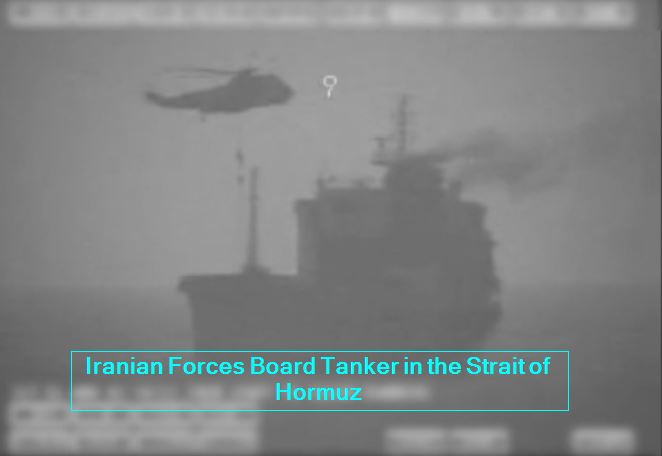 Iranian Forces Board Tanker in the Strait of Hormuz One day after turning 44, Ninel Conde is seen in a red bikini | The NY Journal