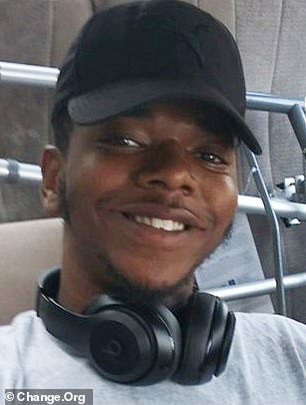 
Body and dash camera footage has been released from an incident in which a black man was shot and killed by a Waukegan police officer in Illinois.

Marcellis Stinnette, 19, was fatally shot and his girlfriend, Tafara Williams, 20, was wounded after a Waukegan police officer shot them in their car on October 20.

Footage released by Waukegan police on Wednesday shows clips from multiple cameras to piece together the incident, starting with an officer telling Stinnette he is under arrest and the subsequent car chase, shooting and crash.

The dramatic newly-released video captures the sound of several shots ringing out before an injured Williams can be heard begging for help and asking ‘why did you shoot us’.

In reply, an unnamed officer shouts ‘you almost tried to run me over’ amid a tense stand-off in the aftermath of the shooting that left Stinnette fatally wounded.

To the dismay of the families of Stinnette and Williams, the crucial camera – the body cam of the officer who fired on the vehicle – was found to have not been turned on, a significant factor in the Waukegan Police Department’s decision to fire the officer. 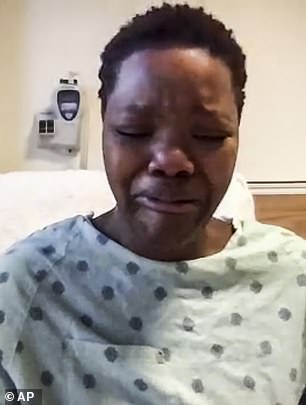 Marcellis Stinnette, 19, (left) was killed and his girlfriend and the mother of his child, Tafara Williams, (right) was seriously injured when a police officer in Waukegan opened fire on October 20. On Friday night it was announced the officer involved had been fired

In a news statement released last week, officers said the shooting occurred just before midnight after an officer was ‘investigating an occupied vehicle’ which fled.

On Tuesday, Williams said in a news conference from her hospital bed that she and Sinnette were in the car to smoke after putting their seven-month-old son to bed.

She said that she had turned on the interior lights of the vehicle so that the officer could see that she and her partner had ‘no weapons’ and that they ‘weren’t doing anything illegal’.

‘Then he started harassing Marcellis, he stood near the car with his left hand on the gun and he said to Marcellis, “I know you from jail,”‘ Williams said.

The video starts with the officer already at the vehicle, pulled up along-side where Sinnette and Williams are parked. It is unclear what happened before this point.

He can be heard asking whether Marcellis is ‘that dude that got in an accident’ and then asking for the couple’s names. 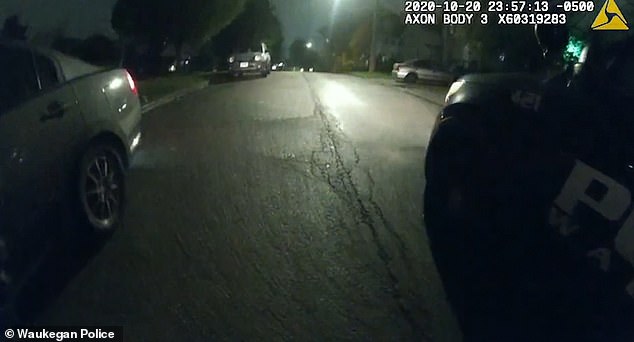 Body camera footage from the first officer shows the moment he approached the vehicle in which Stinnette and Williams were together, minutes before midnight on October 20 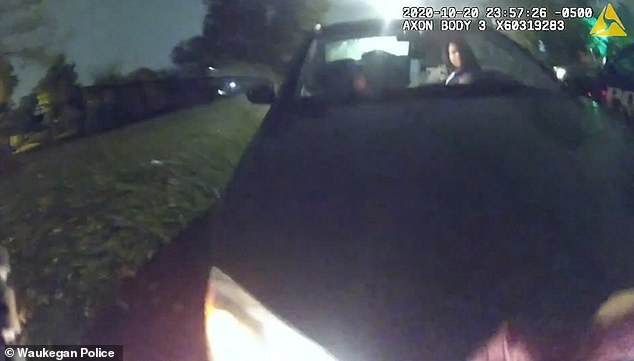 The officer can be heard asking for Marcellis’ name, before telling them that he is under arrest and saying that there is a warrant his arrest. As he asked Marcellis to come out of the car, Williams speeds off in the car

It sounds like the pair tell the officer his name is ‘King’ before the officer responds, asking ‘I thought you were one of the Stinnette kids?’ and approaches the car.

The officer then asks if his name is Marcellis before telling him that he is under arrest.

‘Why?’ Williams is heard asking the officer in the video.

‘Because I said,’ the officer says. The officer walks over to the passenger side of the vehicle, and shines torch in Marcellis’ face, telling him to ‘show me the hands, pal.’

‘I ain’t playing with you because I know you,’ he continues. ‘Marcellis you’re under arrest,’ telling the pair ‘because he’s got a warrant’ when the pair protest.

As he asks Marcellis to get out of the car, Williams speeds off down the road. The officer is heard saying ‘hey they just ran me over’ while walking back to his vehicle.

On Tuesday, Williams claimed that she asked if the couple were free to leave or if they were under arrest, according to NBC. She said she began to drive away as the officer stepped back from the car to make a call. 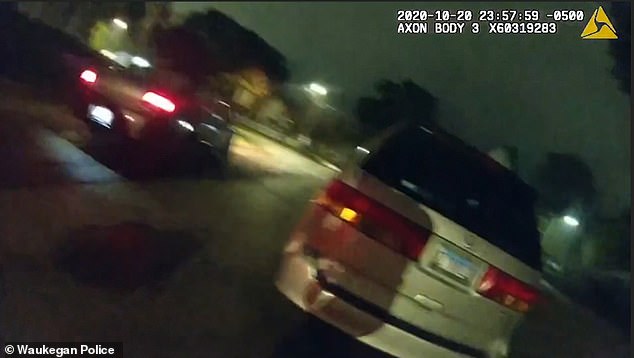 Pictured: Body camera footage from the first officer showing Williams’ car speeding off from the scene. The officer is heard saying ‘hey they just ran me over’ while walking back to his vehicle 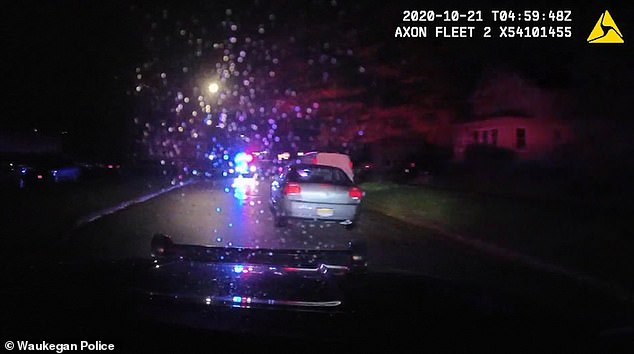 A police chase ensures, shown in the footage from a second officer’s dash cam (pictured). The chase doesn’t last long, and Williams soon pulls up onto the side of the road

From the body cam footage, it is unclear whether the car made any contact with the officer. At this point, the officer hails other officers over the radio, describing the direction the couple are travelling.

The video then cuts to the dash camera footage of a second officer – the officer who fired the shots. Williams is seen turning out of a road in front of the officer’s car, with the officer starting his pursuit.

Flashing lights of police vehicles are seen as Williams continues to drive away from the officers through a stop sign before pulling over on grass beside the road with the officer pulling up beside her.

Williams’ car is only partially visible in the footage, and it is unclear whether the officer exits the vehicle at this point, but he is heard shouting ‘get out of the f***’ as Williams begins to reverse off the grass.

An engine roars, tires squeal and what sounds like six shots can be heard being fired at the vehicle.

The footage then cuts to a security camera mounted nearby showing Williams’ car reversing across the road, over a small parking lot and crashing into a building, with the audio from the body camera playing over the top.

There was no footage released on Wednesday showing the shots being fired, the security camera footage did not capture of the officer in frame. 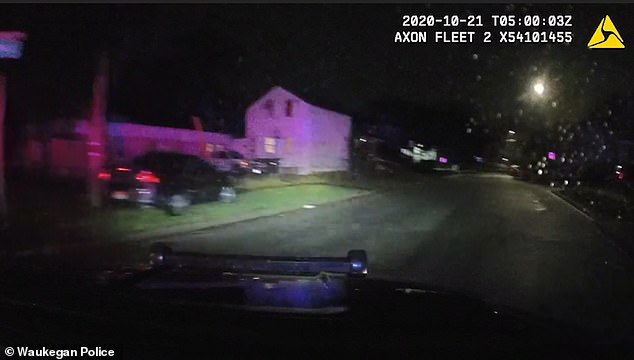 Pictured: Williams pulls up onto the side of the road as the second car gives chase. Seconds later, she begins to reverse, at which point the officer can be heard firing shots at the car 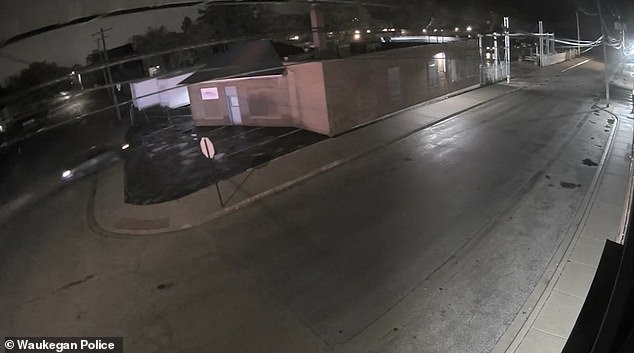 As the shots are head, the video cuts to a security camera that shows the car reversing across the road, over a small car park, and crashing backwards into a building

‘There was a crash, and I lost control. The officer was shooting at us. The car ended up slamming into a building. I kept screaming, “I don’t have a gun!” but he kept shooting,’ Williams said.

From the audio it is not clear whether Williams made the statements as the officer fired the shots.

The video cuts back to the second officer’s body cam – the one who fired the shots – with the officer standing across the street from where Williams’ car has crashed.

Williams and Sinnette remain in the car near the building from where Williams can be heard shouting ‘we didn’t do anything wrong’ to the officer who fired the shots.

‘I was right behind you and you almost tried to run me over,’ the officer yells back, a similar claim to the first officer who originally approached the couple.

More officers arrive at the scene and begin to ask what happened, who was shot and who fired the shots, amid a tense standoff between the officer and Williams.

Williams is heard yelling ‘why did you shoot us’ and ‘all I did was reverse’ before telling officers ‘he got shot, he got shot, please help’ – talking about Sinnette.

The Waukegan Police Department confirmed that Sinnette was taken to hospital where he later died. No weapons were found in the vehicle, police said. 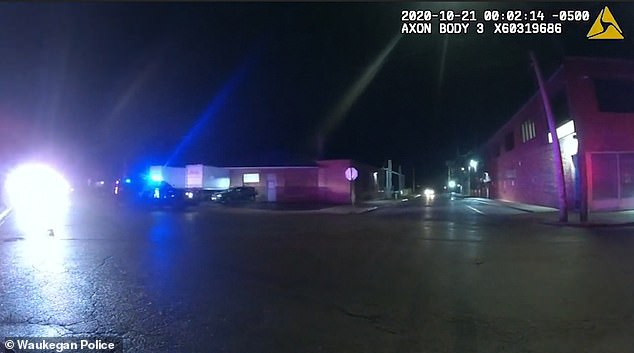 At the scene of the crash and shooting and in body camera footage from the second officer who fired the shots – now turned on – Williams can be heard shouting ‘why did you shoot us?’

On Friday, the police department fired the officer who shot Williams and Stinnette, described as a Hispanic, five-year veteran of the force. His identity has not been provided.

Waukegan Police Chief Wayne Walles said the officer had committed ‘multiple policies and procedure violations’ during the shooting. The officer who first investigated the vehicle was been described as white.

The second officer said in his account of the incident that he got out of his car when the vehicle pulled up after the chase, and that as it began to reverse the officer fired his weapon ‘in fear of his safety’, according to a news release last week.

In an accompanying statement with the footage release of Wednesday, Waukegan Mayor Sam Cunningham that the body-worn camera of the officer who fired the shots was not activated at the time of the shooting.

‘This was a breach of Waukegan Police Department policies, and one of the reasons for the officer’s termination,’ the mayor said.

The couple’s families and lawyers had hoped that bodycam footage would establish the truth but were left disappointed Wednesday when it was announced that the officer who fired the shots had not turned his camera on. He also accused the cop who shot the couple of immediately trying to create a false narrative around the incident when he turned on his bodycam for the aftermath of the shooting.

‘Once the shooting officer turns on his bodycam, he says, ‘you tried to run me over’. That is the false narrative,’ he told reporters.

‘He has zero credibility. There should be no weight given to his self-serving statement.’

Benjamin Crump, a civil rights attorney who is representing Williams, said the video clips were evidence of  ‘police creating a false narrative.’

‘This presents an incredible obstacle to learning the truth in this tragic case,’ the attorney said in a statement.

‘Body cams act as an essential bridge between law enforcement and the public they are sworn to protect while helping ensure transparency and accountability, and building the trust that is still so painfully lacking.’

Lake County State’s Attorney Michael Nerheim said that he has asked the U.S. Justice Department to ‘review the circumstances’ surrounding the October 20 shooting, and once the independent investigation is completed it will be turned over to the state’s attorney office for review. Rayon Edwards speaks on a megaphone as he marches with protesters during a protest rally for Marcellis Stinnette on October 22. The officer who shot Stinnette has been fired

Protests since the incident have been peaceful, and Waukegan has avoided the kind of looting and violence that occurred in nearby Kenosha, Wisconsin, just 15 miles north of Waukegan, after a white police officer shot a black man, Jacob Blake, in the back seven times in August.

Blake survived, but his family has said that he is paralyzed from the waist down.

Yet, Williams told protesters in a telephone call from her hospital bed that she would continue to fight for justice on Stinnette’s behalf.

‘He didn’t deserve it, and they waited for him to die,’ she said Saturday on a call that a crowd of protesters heard after her mother put a megaphone to her cellphone.