Boris Johnson is preparing to pour hundreds of millions of pounds into holiday clubs in an attempt to defuse the row over free school meals.

The Prime Minister yesterday insisted the Government will ‘do everything in our power to make sure that no kid, no child goes hungry’.

But he resisted calls to perform a U-turn over his refusal to extend free school meals for children in England over the Christmas holiday.

The Prime Minister yesterday insisted the Government will ‘do everything in our power to make sure that no kid, no child goes hungry’

As pressure continued to pile on the Government to act, a petition from footballer Marcus Rashford yesterday exceeded more than 900,000 signatures.

On a visit to a hospital in Reading, Mr Johnson said it was right that Universal Credit had been increased by £20 a week while £63million has been provided to local authorities to help those who are struggling to afford food and essentials.

The Mail understands one proposal under consideration is the nationwide rollout of a scheme to put on holiday clubs for disadvantaged children.

Under a pilot that ran in 17 areas this summer, 50,000 pupils who usually receive free school meals took part in the programme, which offers outdoor activities and a hot meal.

In a Government-commissioned report earlier this year, Henry Dimbleby, the co-founder of the Leon restaurant chain, recommended that the scheme be available across England, with eligibility extended to all families in receipt of Universal Credit. The Mail understands one proposal under consideration is the nationwide rollout of a scheme to put on holiday clubs for disadvantaged children. Slice: Mila, one, eats free pizza

It is estimated this would allow an extra 1.1million children to take part at a cost of £200million. Mr Sunak is also understood to be ‘open’ to the idea of extending the £20 a week increase in Universal Credit, which is due to finish in April.

Tory former minister George Freeman yesterday asked the Government to ‘accept we misjudged the mood’ and ‘got it wrong’ last week by opposing a Labour motion to provide free school meals during the October half term.

In a statement on Twitter, he wrote: ‘With hindsight I think that was a mistake… last week’s tribal parliamentary politics let down a nation looking for a spirit of joint working for the common good.’

The Prime Minister yesterday defended his handling of the row.

Speaking at Reading’s Royal Berkshire Hospital, he said: ‘We don’t want to see children going hungry this winter, this Christmas, certainly not as a result of any inattention by this Government – and you are not going to see that.’

Mr Johnson said he had not spoken to Mr Rashford since June ‘but what he is doing is terrific’.

The Prime Minister said the Government is ‘uplifting Universal Credit by £1,000’ and added: ‘I totally understand the issue of holiday hunger, it is there, we have to deal with it. The debate is how do you deal with it.’

But even Tory councils said the £63million received from central Government in June is not proving to be enough to cover the cost of providing holiday meals.

Izzi Seccombe, the Conservative leader of Warwickshire County Council – which is paying for meals over half term and Christmas – said: ‘We’ve spent that money, over half a million pounds has been spent already.’

She told BBC Radio 4’s Today programme that it would be ‘tight’ for local authorities to afford the support and added: ‘We are going to be funding it ourselves now… so we will be trying to find it from other sources.’ 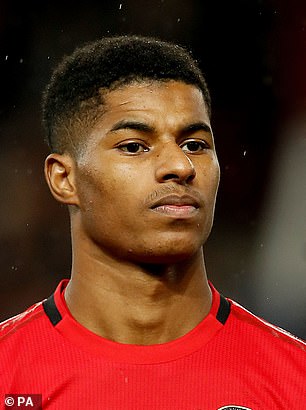 As pressure continued to pile on the Government to act, a petition from footballer Marcus Rashford yesterday exceeded more than 900,000 signatures

But, across the country, kind businesses have stepped in to help out struggling families.

Yesterday, eight-year-old Poppy could not contain her excitement as she picked up her Hawaiian pizza from a pub offering free food during half term.

Her mother, Simone Barks, 28, had taken her to The Shortlands Tavern in Bromley, south-east London, along with her brother Stanley, seven, and one-year-old sister Mila.

The pub is one of many which have volunteered to feed hungry children, from small businesses to fast food giant McDonald’s.

Miss Barks, a former dinner lady who lost her job due to the pandemic, said: ‘I just couldn’t believe how kind businesses have been to support families like us.

‘This half term has been such a struggle, I rely a lot on free school meals for the kids.’

Stuart Anderson, MP for Wolverhampton South West, said the word ‘scum’ was sprayed on a window at his office.

‘I accept political arguments but you should not impact people’s safety by targeted harassment and vandalism.’

Marcus Rashford is unlikely to be named BBC Sports Personality of the Year despite the fact that his tireless campaigning has secured free meals for more than a million children this year.

Insiders have said that the England and Manchester United footballer is not expected to make the shortlist due to his less significant ‘sporting achievements’ over the last year.

Rashford was named odds-on favourite to win by bookmakers only last week. A panel of judges is due to meet next month to finalise the shortlist, which usually contains six nominees.

The panel sets out to recognise ‘UK sporting achievements on the national and or international stage’. The award will be handed out during a televised ceremony on 20 December.

Instead, it is understand Rashford will be in the running for the Helen Rollason Award for ‘outstanding achievement in the face of adversity’.

Should coronavirus vaccine be mandatory? This is what the experts say | The State

Should coronavirus vaccine be mandatory? This is what the experts say | The State

A breakthrough in implants to restore sight