By Maxine Shen For Dailymail.com

A new video shows Canadian police officers reacting coolly while inside their cruiser as protesters are seen smashing its windows with rocks and hitting it with a lacrosse stick.

‘Protesters falsely blamed #OPP for escalation in #Caledonia. Extremely proud of my officers for their professional and measured response to keep the peace & preserve life while under attack,’ Carrique wrote. 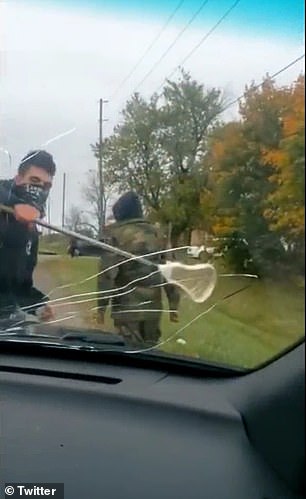 The video was shot near the McKenzie Meadows housing development construction site, which has been the site of a land dispute with First Nations peoples since July.

Demonstrators said the development near Six Nations of the Grand River First Nations Reserve violates the sovereignty of the Haudenosaunee people because it is on unceded land, according to the Brampton Guardian.

In the video, men with masks covering their faces are seen approaching the parked OPP cruiser, as an officer relays what’s happening on the radio to his dispatcher.

‘A male with camo is throwing rocks at us,’ the officer says calmly, as another man holding a lacrosse stick approaches the cruiser on foot.

The man then begins yelling at the cops to leave and hitting the cruiser with his lacrosse stick. As he does that, the man wearing a camouflage jacket throws what appears to be a rock at the windshield, cracking it.

‘Get out of here!’ one says as he walks around to the passenger-side window and punches it, while the man with the lacrosse stick continues to strike the car’s hood and windows.

The video ends with the officers appearing to get ready to exit the cruiser as the attackers run away. 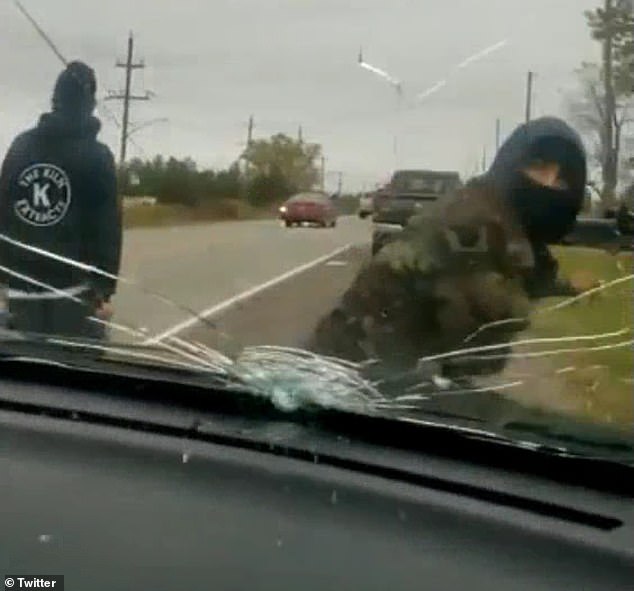 At one point, a protester was seen breaking the police cruiser’s windshield with a rock The incident occurred days after a judge ordered the land protesters to leave the construction site that they had been occupying since July. Police are seen on site October 23 Protesters said they erected a barricade at the development to protect themselves from police. The barricade is seen here on October 23, the day after it was put up

Protesters have been occupying this construction site in Caledonia, Ontario, since July

It’s unclear whether the officers confronted the protesters after the incident, however OPP Sgt. Kerry Schmidt told the Toronto Sun that the man with the lacrosse stick was identified and will face charges when arrested.

Officers are still looking to identify the man wearing the camouflage jacket.

The incident occurred in the wake of a judge ordering protesters to permanently leave a construction site on October 22.

Following the ruling, demonstrators claimed that police had fired rubber bullets at them. The OPP, meanwhile, said that their cruisers had been damaged by protesters, according to the Brampton Guardian.

Protesters said in a statement that police were told to leave the development area prior to the incident depicted in the video.

The protesters said that they had put up blockades on Thursday night and that, ‘The actions of Land Defenders and community members, including erecting barricades, are a protective action meant to keep us safe from police violence.’

The statement went on to say that, ‘Police continue to threaten arrest and it’s up to us to keep ourselves safe from these oppressive police tactics. Police have no place in dealing with land disputes.’

Since July, 33 people have been arrested while OPP says that 100 charges have been laid against protesters.