By Christine Rendon For Dailymail.com

Mark Consuelos hilariously attempted to clear things up after his seriously tight trousers got people talking.

Last week his wife Kelly Ripa, 50, posted a slideshow of Halloween memories, which included a photo of him, 49, dressed as a CHP officer with restaurant owner Bruce Bozzi Jr.

But all people could talk about were Mark’s extremely fitted slacks.

‘That’s definitely a shadow’: Mark Consuelos hilariously attempted to clear things up after his seriously tight trousers got people talking

‘Your husband stuffed his pants,’ one Instagram user hilariously accused the actor.

‘Look at those tight pants,’ commented another.

Mark attempted to clear things up after his wife posted the attention-grabbing photo. 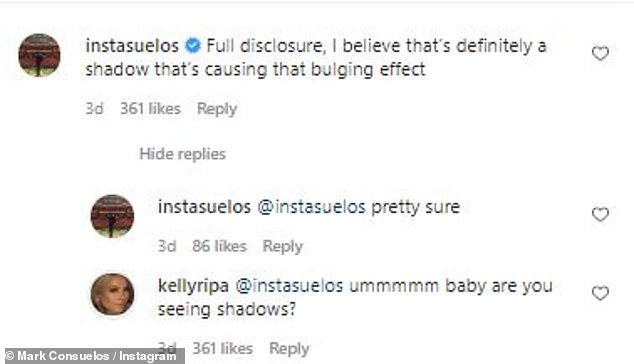 Clearing things up: Consuelos commented on the photo after fans swarmed in the comments section

Knee-slapper! One Instagram user hilariously accused the actor of stuffing his trousers

Married since 1996, Kelly and Mark have never shied away from flaunting their love for one another on Instagram.

Earlier this month, Kelly posted a sizzling snap of herself in bed with Mark. Relationship goals! Married since 1996, Kelly and Mark have never shied away from flaunting their love for one another on Instagram ‘Still a full #humpday #mood’: Ripa posted this sizzling snap of themselves in bed earlier this month

Once again, all eyes were on Mark and his sculpted six pack.

‘One year ago and still a full #humpday #mood this man eats #pbandj,’ Kelly captioned the photo.

Mark and Kelly eloped in 1996 after meeting as costars on the set of All My Children.

The family are now self-isolating together, with Michael even assisting his mother behind-the-scenes of her show when she was hosting Live! from home.

Despite the close quarters, Lola is not complaining about locking down with her family.

‘It’s honestly not as bad as I thought,’ the college student admitted on Live with Kelly And Ryan back in March. Not the same Halloween: Ripa and her cohost Ryan Seacrest hosting their show in pre-pandemic times Make a wish! The hosts previously dressed up as the I Dream Of Jeannie cast

A hat trick for Cole Caufield

With goals from Cristiano Ronaldo and Álvaro Morata, Juventus advanced to the last 16 of the Champions League | The State

Unexplained influx of blue whales on the North Shore