Knives out for Rishi Sunak in school meals row: Chancellor and Education Secretary Gavin Williamson blame each other for school meals fiasco as Marcus Rashford pushes the PM towards ANOTHER U-turn

By John Stevens Deputy Political Editor For The Daily Mail

Rishi Sunak was locked in a bitter blame game with Gavin Williamson over the row on free school meals last night.

Allies of the Chancellor furiously hit out at suggestions that Mr Sunak was responsible for blocking the extension of the scheme to the October half term holidays.

Instead, they pointed the finger at Mr Williamson, the Education Secretary, who they insisted had not put forward a spending proposal for approval.

It came as Mr Sunak became the target of online attack adverts which blamed him for the Government’s refusal to perform a U-turn.

Rishi Sunak, who has increasingly become the focus of attacks by Opposition supporters, was locked in a bitter blame game with Gavin Williamson over the row on free school meals

A group headed by a former Labour campaign chief used a slick campaign video to denounce the Chancellor’s family wealth.

Mr Sunak has increasingly become the focus of attacks by Opposition supporters amid speculation he could become the next Tory leader.

In a tweet accompanying the video, campaign group One Rule For Them wrote: ‘This man is leading the fight within Government against Marcus Rashford’s campaign to feed disadvantaged kids in the school holidays. Rishi Sunak, a man of the people? You decide.’

The group was founded by Adam McNicholas who worked as a Labour campaign director in the run up to the 2017 general election.

He has pledged to use US-style election attack adverts ‘take the fight to the Tories in ‘Red Wall’ seats between now and the next general election’.

In an article in The Times last month, he boasted about his desire to use dirty tactics.

He wrote: ‘There will never be a better time to go low. Labour must seize its moment.’ Mr Sunak agreed with Mr Williamson earlier in the year that cash should be made available to fund free school meals over the Easter holidays.

This was extended to the summer holidays following a campaign by Mr Rashford, the Manchester United and England forward.

The Chancellor, Education Secretary and Prime Minister then agreed that this would not be continued over future school holidays.

But it is understood the Treasury was angry over claims that it was responsible for blocking the extension of the scheme over the half-term and Christmas holidays.

Sources said there was no request from the Education Secretary for the money to provide meals for 1.4million disadvantaged pupils during the break. 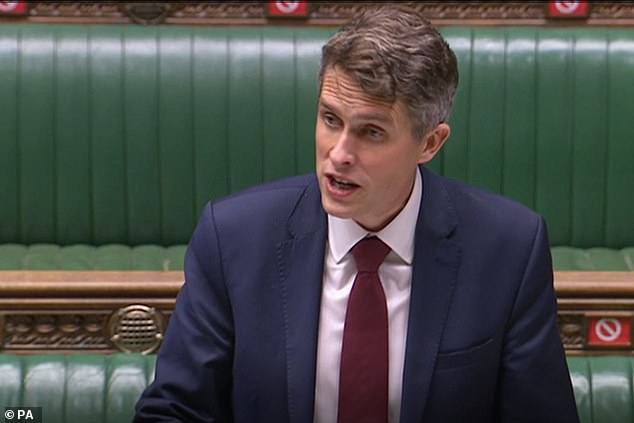 Allies of the Chancellor furiously pointed the finger at Mr Williamson, the Education Secretary, who they insisted had not put forward a spending proposal for approval

An ally of Mr Sunak said: ‘I cannot be Treasury-blocking as there’s nothing to block. The Department for Education never sent in a spending proposal.’

Mr Williamson’s team did not respond to requests for comment last night. Mr Sunak faced criticism earlier this year when he posed for a pre-Budget photo with a £180 ‘smart mug’ that keeps coffee and tea at the same temperature.

It was understood to have been a Christmas present from his wife, Akshata Murthy, who is the daughter of Indian billionaire Narayana Murthy – who co-founded IT services giant Infosys.

Mr Sunak was appointed Chancellor in February – just four weeks before the budget – following the shock resignation of Sajid Javid.

He has been the Conservative MP for Richmond in Yorkshire since 2015. His father was a GP, and his mother was a pharmacist. His parents – who are of Indian origin – came to the UK from east Africa.

It is understood that nearly all councils have spent most of their allocation from the £63million. The Government’s guidance on the money, given on July 10, said it anticipated ‘most of the funding would be spent within 12 weeks’.

It’s official: Napoli’s stadium changes its name; we tell you when it will be released as “Diego Armando Maradona” | The State

It’s official: Napoli’s stadium changes its name; we tell you when it will be released as “Diego Armando Maradona” | The State

Christian McCaffrey wants to return to the game this week