This is the moment four men brawled in the middle of the road in central London, bringing traffic to a standstill.

The bust-up was filmed in Picadilly Circus, one of London’s busiest shopping districts on Monday afternoon.

In the clip, two sparring males wrestle and punch one another in the middle of the road.

A third male intervenes and knocks down two men with a single punch – sending him crashing into the middle of the road. 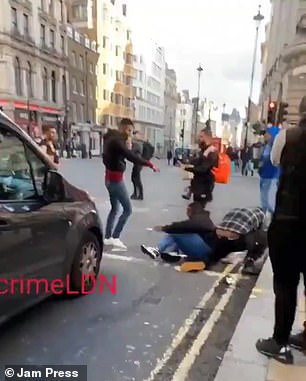 As the man struggles to recover from the vicious blow, a fourth male enters the fight and punches the assailant in retaliation.

The pair brawl with each other before the assailant eventually knocks this man to the ground with a single punch too – sending him flying backwards so he lands directly on top of his first victim.

The strange fight dies down as the duo stumble back on to their feet and the clip cuts to an end.

The footage was filmed by @areeb_am on Monday and posted on Instagram. One man floored another with a single punch, after also knocking the man in the plaid shirt to the ground

Social media user @areeb_am said he didn’t know why the brawl erupted between the four men.

However his footage of the incident has left social media users stunned. Many individuals commented on the third man’s astonishing knock-out punches in the fight.

One wrote: ‘MY guy knocked them both out!’ whilst another remarked ‘Man 2 tried to get up and didn’t even make it to his knees!’

Meanwhile another online user exclaimed ‘This is just crazy!!’ The fight (pictured) was reported to the Metropolitain Police, but everyone involved had left the scene by the time officers arrived

Police were called and responded to reports of a fight.

Sort out testing… or else: Teaching union warns Government schools could be forced to close again

A spokesperson for the Metropolitain Police said: ‘Police were called at approximately 14:50hrs on Monday, 26 October to reports of a fight in Piccadilly Circus, W1.

‘Officers attended but all those involved had left the scene prior to police arrival. No reports of any serious injuries. No arrests.

‘Anyone with information that could assist police is asked to call 101 or tweet @MetCC and quote CAD4152/26Oct.

From bipolar disorder to his friendship with Tom Cruise: the five facts you did not know about Ben Stiller | The State

From bipolar disorder to his friendship with Tom Cruise: the five facts you did not know about Ben Stiller | The State

“The school of tomorrow”: leaving school in the 1960s

Laurent Commission: the grandmother of the martyred girl reassured by the recommendations