Amy Coney Barrett is 48, a mother of seven and a brilliant legal mind – and now she is the most divisive Supreme Court Justice in at least a generation and perhaps far longer.

She brings to the Supreme Court a short judicial career, a longer academic one and the hopes of a conservative legal movement that they have a secure 6-3 majority in the high court for now, and a stalwart vote on it for many decades to come.

Coney Barrett’s life story makes her the sixth Catholic on the court, keeps the six-three male-female make-up of the bench, and for the first time ever puts on the court someone who openly identifies with the charismatic wing of modern Christianity.

She is also the only one who did not receive an education at Harvard or Yale, and the only mid-western and southern justice, having been born and brought up in Louisiana and spent the rest of her life in Indiana.

Barrett was brought up in Metairie, Louisiana, as a member of charismatic, conservative, Catholic group  People of Praise and one of seven children.

Her father, Mike Coney, a former oil company lawyer, has been a leading member for decades. Her attorney-husband, Jesse, 46, whom she met while both were students at Notre Dame University, was also raised in the group.

She had studied for her undergraduate degree at Rhodes College in Memphis, TN, and contemplated further study in English literature but instead decided to study law, going to Notre Dame whose law school has built a reputation as predominantly conservative.

Family photo of Amy Coney Barrett, her husband Jesse Barrett, and their seven children Emma; Vivian; Tess; John Peter; Liam; Juliet; and Benjamin. Her large family has been part of her appeal for conservatives. Vivian and John Peter are adopted from Haiti and their youngest son Benjamin has Down Syndrome Amy Coney Barrett is seen in a family photo with siblings and parents. In 2018, Barrett’s father Mike Coney wrote an online biography of himself on his church’s website, saying he joined People of Praise because he and his wife Linda ‘felt a call to live life in a close knit Christian community…one that would help form our children into good Christians and strengthen our marriage and family’ Described by one professor as the best student he had ever had, she went on to be a clerk for Antonin Scalia, the justice who championed originalism as a judicial philosophy.

She had a brief career in private practice but became a law professor at Notre Dame, and married and had seven children.

The visible manifestation of her conservative Catholic beliefs was part of her appeal to political conservatives.

But it has also focused attention on the tiny group, which has just over 2,000 members and which does not represent mainstream Catholicism.

People of Praise is headquartered in Notre Dame’s hometown, South Bend, Indiana, and many of its leading members have ties to the university. According to its website, the group has branches in 14 states as well as one in Canada and two in the Caribbean. It runs three Grades 7-through-12 Trinity Schools and one elementary school.

Both— who lives in South Bend — and People of Praise seem to have gone to extraordinary lengths to hide her affiliation. Articles mentioning her were removed from the group’s website shortly before she was to be considered for a seat on the Federal Appeals Court in 2017.

Barrett’s ties to People of Praise only became public when the New York Times broke the story three weeks after her confirmation hearing as an appeals court judge, but before the committee had voted. The committee eventually split along party lines to confirm her. Three Democrats voted with the Republican majority in the vote in the full Senate.

People of Praise is strongly anti-abortion. It also rejects homosexuality. ‘Both are seen as being accepted by human law, but rejected by divine law,’ the former member explained.

‘Homosexual relationships are taboo, and any LGBTQ inclinations are seen as temptations that must be overcome through prayer. If that fails, the member must lead a life of chastity.’

Even dating is a no-no until a member has ‘prayed through their state in life’ and decided they are ready to ‘marry for the Lord.’ If they have not committed themselves to marriage, they must not date. 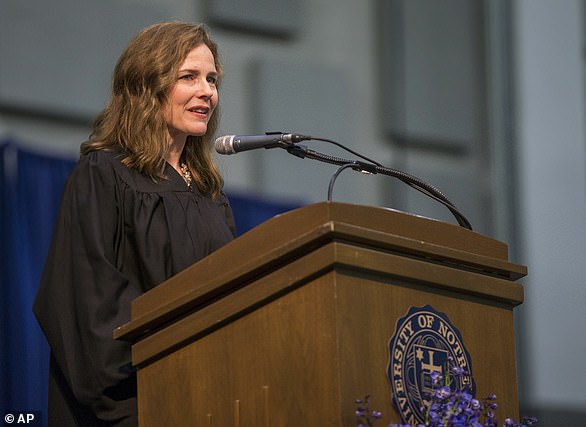 Barrett got her law degree at Notre Dame, graduating first in her class in 1997. She’s pictured speaking at Notre Dame’s Law School commencement in 2018 Barrett and her husband Jesse are members of People of Praise, a small group that teaches that wives have to obey their husbands in everything

The group is probably best known for its doctrine that women must obey their husbands in everything, and its system where all men and single women must report to their mentor — called a ‘head’. Husbands act as the ‘head’ for their wives.

The ‘heads’ have such influence they give direction on who a member should date or even marry, how to raise children, whether to take a new job and where to live.

Until recently the female leader was known as a ‘handmaid.’ But that title was dropped after the success of the dystopian TV show The Handmaid’s Tale and the negative connotations it brought to the title.

Author Margaret Atwood, who wrote the original novel, said it was based on a group that has similar views to People of Praise.

The conservative Catholic beliefs have bled into her public life:  she is a former member of the Notre Dame’s ‘Faculty for Life’ and in 2015 signed a letter to the Catholic Church affirming the ‘teachings of the Church as truth.’

Among those teachings were the ‘value of human life from conception to natural death’ and marriage-family values ‘founded on the indissoluble commitment of a man and a woman’.

She has previously written that Supreme Court precedents are not sacrosanct. Liberals have taken these comments as a threat to the 1973 Roe v. Wade decision legalizing abortion nationwide.

Barrett wrote that she agrees ‘with those who say that a justice’s duty is to the Constitution and that it is thus more legitimate for her to enforce her best understanding of the Constitution rather than a precedent she thinks clearly in conflict with it’.

What she said is the distillation of originalism and raises the possibility that she could tear up precedent if she sees it as out of line with the original constiution.

That puts her in sync with Scalia and the Republican senators who voted for her and expect her to rule in line with that for decades to come; it puts her violently at odds with those who do not agree, and puts her on track to be a justice whose presence on the bench is going to divide opinion as long as she remains on it.