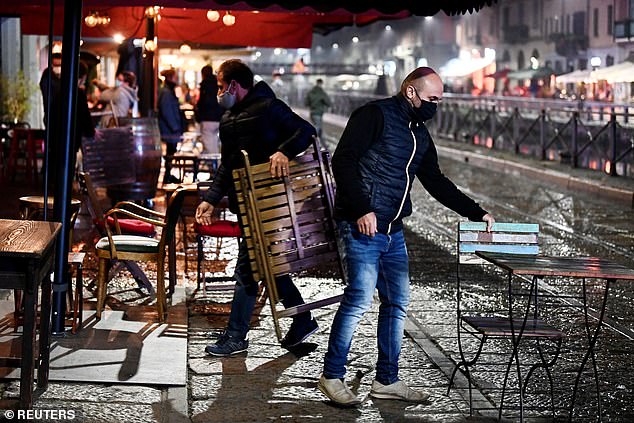 
A big man – and a bigger politician – admits he was wrong. I applaud Rishi Sunak for acknowledging yesterday that his Job Support Scheme, which had aimed to protect jobs during local lockdowns, was not fit for purpose.

By pledging, along with other measures, new cash grants for the hospitality sector, it is clear that the Chancellor has listened to our industry, which employs millions across the country. Many of those jobs which would have been lost will now be saved.

People collect tables and chairs, as the region of Lombardy imposes a curfew after being hit by a surge of coronavirus disease (COVID-19) infections, in Milan, Italy, October 22, 2020

But, like thousands of other business owners, I’ve felt for a long time as though I’ve been beating my head against a brick wall as the Government failed to heed our pleas and protests.

We are constantly told of the need to ‘follow the science’. But the science I’m looking at comes from the World Health Organisation, the most influential medical authority in the world. Its clear guidance is that the financial and psychological damage of lockdowns will often far outweigh their benefits. For months now British people have been beset by a string of nonsensical and contradictory edicts. The absence of leadership has been palpable.

After so many new strictures and U-turns, no wonder that, at times, it feels like almost no one knows what the rules are any more. Even the police are confused. Earlier this week, as the Mail reported, the chief of the Met told restaurants and pubs to check people’s identities, by using driving licences and other documents, to ensure that customers dining together also lived together. Police officers stand guard in the street before a local lockdown amidst the spread of the coronavirus disease (COVID-19) in Manchester, Britain October 22, 2020

At that point, I began to feel that we were approaching the conditions of a police state. There was no logic to it: why should people obey a curfew and leave a restaurant at 10pm if they are all going home to the same house anyway? A day later Housing Secretary Robert Jenrick back-pedalled on that deeply misguided scheme. 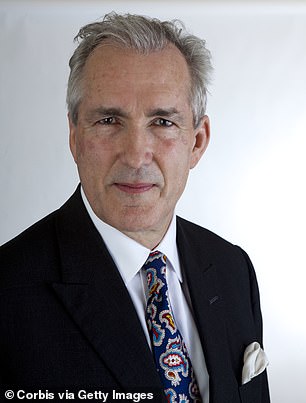 Far from reassuring, this added to the impression that no one in Government knows what they are doing nor why the livelihoods of millions are being wrecked.

I am not prepared to stand by while ministers chase around in circles trying to work out what their own edicts mean. None of these overlapping rules fit together.

It’s clear these pernicious diktats have been drawn up by different committees that do not talk to each other. The other evening I was at our restaurant Fischer’s in central London. At 10pm I watched in dismay as all our customers reluctantly had to leave.

Outside it was raining and particularly cold. Many left their cars at home due to the ill-advised Congestion Charge extension, and Tubes and buses were packed.

Dozens huddled together cheek by jowl under the canopies outside, desperately trying to get black cabs and Ubers in the cold and wet. Anyone could see that this was a genuine threat to their health, whether from Covid, seasonal colds or even, for the vulnerable, pneumonia.

Yet they all could have been safe and warm if they had been allowed to stay inside and leave in their own time. People gather outside bars the night before a local lockdown amidst the spread of the coronavirus disease (COVID-19) in Manchester, Britain October 22, 2020

Over the past three months more than a quarter of a million customers have come through the doors of our restaurants. As far as I am aware, at the time of writing, not one of them, nor a member of staff, has tested positive for Covid-19.

Yet our businesses are being hamstrung by absurd, counter-productive curfews and are under threat of even more stringent lockdowns. It makes no sense at all.

The shift in the country’s mood since the spring is palpable. I fear many are losing their faith in the Government altogether.

When that happens the breach of trust takes a long time to heal. While I welcome Mr Sunak’s measures, we need our leaders, starting with the Prime Minister, to follow the Chancellor’s example and have the courage to admit: we got it wrong.