Among the British horrors, the story of Jonathan Wilde, whose actions brought more than sixty men to the gallows, has a special place – it is the first widely publicized tale of the London criminal empire to fit the definition of the Mafia. The mafia itself is undoubtedly immortal, but the life of its creator ended badly.

Jonathan Wilde was born in 1683, and at first his life was quite law-abiding. Living in a small village, he graduated from elementary school, learned a craft, and in due time got a family – a wife and a child. But then he left for London, and things went badly there: he was arrested and put in a debt prison. At the time, it was commonplace, but for Wilde, the moment was a turning point.

In the eyes of people from the 21st century, the order in debt prisons of those years was strange: by paying money to the guards, it was possible not only to improve the conditions of detention, but also to leave the prison from time to time, receive visitors, and bring a prostitute into the cell, and quite legally. And what was illegal was not prosecuted in any way: earning money from prisoners was considered an inalienable right of custody.

The resourceful Wilde took a closer look – and organized his own small business in the prison: he began to help the guards, carrying out their orders and mediating between them and the prisoners. Things went so well that, being in a debt prison, he was able to pay off the debt for which he was placed in this very prison. And the young man met here with a prostitute named Molly Meiliner – after his release in 1712, she brought him to the city gang, of which she was a member. The criminal couple quickly made a career: Molly has grown to the status of a brothel madam, and Wilde – to a buyer of stolen goods. He decided not to stop there. 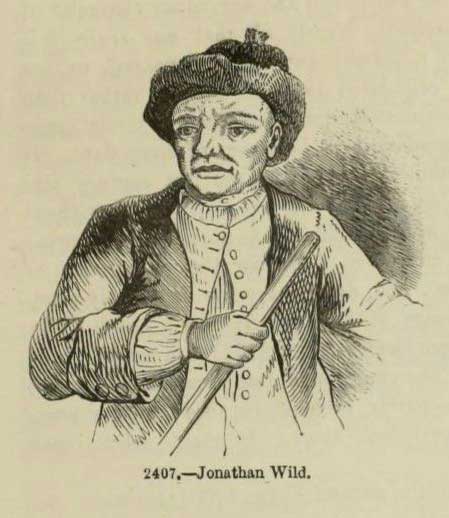 It must be said that in the 18th century England was changing very strongly and rapidly: industry was rapidly developing in the country, more and more new enterprises arose. The consequences of this process were many, and one of them was a sharp jump in the level of crime and a change in its nature.

First, the number of common crimes has increased: there are more wealthy residents in the city, which means more robberies, thefts and robberies. Secondly, a stratum of the population appeared that valued personal information and reputation, therefore professional blackmail flourished in the criminal environment. Thirdly, an active business life meant new open spaces for criminals with remarkable intelligence: extortion, racketeering, bribes, etc. At the same time, the rights and privileges of the clan nobility were no longer perceived as unconditional. Before our eyes, new strata of society were formed, consisting of ordinary, but wealthy people, efficient and energetic. Newspapers have appeared – and now social ulcers have become difficult to hush up.

Against the backdrop of public discontent, those in power were forced to step up the fight against the growing crime. It turned out so badly for them that they had to partially give control over crime to private hands. So, in England, the thief-taker profession once again flourished – this was the name for people who were looking for criminals on their own initiative. If the “thiefs” caught and delivered a criminal to the authorities, he was paid a fairly large fee from the local administration and often an additional fee from a robbed merchant for the return of property. The “thiefs” recruited a team of “hunters”, often from the same criminals, and scoured the country in search of prey.

Jonathan Wilde by that time had become a “big boss”: he created a huge network of theft gang. But the thieves began to be destroyed on the sly, and soon the cunning Jonathan changed his strategy: he stopped selling stolen goods and went to the “thiefs”.

Funny but true: the owner of the largest gang of thieves in the city registered as a thief-taker, opened an office at the Old Bailey court and began to deal with the return of stolen goods. The technology was simple: members of his gang robbed a rich house, and when information appeared in the newspapers about this with a promise of a reward, Wilde personally came to the authorities and solemnly returned the stolen goods in exchange for a fee. He also completely stopped selling stolen goods in England: if the rewards were not promised, the stolen goods were exported abroad and sold there.

Wilde quickly discovered that reputation can sometimes make more money than property — many merchants were willing to pay a large premium to recover stolen documents, bills, personal notes, or letters. From that moment on, members of Wilde’s gang began to purposefully steal from houses not only valuables, but also papers. And then it turned out that the information is not only important, but also compromising, and then Jonathan Wilde quickly became a professional blackmailer.

Money flowed like a river, and soon Wilde became the most powerful criminal in London. All criminal groups in the city reckoned with him, and thieves’ communities paid tribute to him. He conducted the widest activities: blackmail, extortion, extortion, racketeering, kidnapping, theft, smuggling, robbery, murder – the freshly baked “don” did not disdain anything. For the opportunity to take the top of the pyramid, Wild fought for a long time with several competitors and defeated them all. If someone got in his way, he caught this person and handed over to the authorities as a caught thief along with another portion of the stolen property.

Wilde received his bonuses, the alleged thief went straight to the gallows – the Don’s reputation was solid, and it didn’t cost him anything to fabricate evidence. In total, during his career, he handed over hundreds of people to the authorities, more than sixty of them were hanged. Thus, with the hands of the state, he got rid of everyone with whom he was seriously dissatisfied. According to experts, in the entire history of British jurisprudence, Jonathan Wilde was surpassed in influence only by the Cray brothers.

The worst thing about this story is Wilde’s omnipotence and the fact that it was useless to complain about him. There was simply nothing to catch him. He stopped the sale of stolen goods altogether, returned the stolen goods for a publicly promised reward, and it was impossible to prove that he was the head of the gang that had stolen property: there were no witnesses, and the gang members were silent, fearing to become the next candidates for the gallows. Also “don” paid a huge amount of bribes: administration, officials, guards – and fabricated, when necessary, an impeccable alibi for himself and his people.

It is noteworthy that at the same time Wilde was considered one of the best “thiefs” in the country and actively advertised his status as a benefactor of society, periodically appearing in print and at public events. His opinion in this area was expensive, the City Council even consulted with him on issues of combating crime.

The end of the big don

Impunity ruined Wilde – he, as they say, went too far. He began offering patronage to businessmen (they say, pay me every month, and no one will ever rob you), return stolen property before it is put on the wanted list, and give bribes quite openly.

They began to complain about him more and more often, it was more and more difficult for officials to ignore complaints, even for bribes. The scandal was fueled by the story of Jack Sheppard, the famous burglar. He used to work with Wilde, but once refused to pay him tribute, and the mafioso tried to get rid of the insolent colleague in the usual way, arresting him and turning him over to the state.

Sheppard was actually a serious thief, the prize for his capture was large and well deserved, so no one was surprised at Wilde’s desire to arrest him. But Sheppard escaped after the arrest, after the second arrest he also escaped, and so on four times in a row. When the renowned burglar was held in prison and finally hanged, his accomplices testified, including against Wilde. Behind them, members of the Vorolov’s own gang, frightened by the history of the reprisal against their former comrade-in-arms, began to speak slowly. In the end, Jonathan Wilde was caught organizing a prison break for one of his gang members, and then he was reminded of all his sins. Wilde was tried, found guilty and sentenced to death by hanging. On the night before the execution, it turned out that the one who had sent a lot of people “thiefs” to death was terrified of the gallows, so he tried to commit suicide by drinking sleeping pills. The attempt failed, but he arrived at the execution drugged, and he had to be carried to the scaffold. Britain’s first big gangster was hanged on May 24, 1725, on a theft charge, the only charge that could be proven. Jonathan Wilde left a big mark on history. His biography inspired many writers, including Daniel Defoe, and his illegal activities served as a model for generations of criminals, for which Scotland Yard probably has a separate account for the late “Don”. By the way, the skeleton of “Don” is still in the Hunterian Museum.

Samsung begins wider rollout of Android 11 and One UI 3.0 to latest phones

Surviving Covid viewers were left ‘heartbroken’ after man, 62, lost his battle with coronavirus

UK weather: Icy rain will fall as far south as London tomorrow – but will it snow?