The UK today announced another 21,242 positive coronavirus tests and the deaths of another 189 people as Sir Patrick Vallance claimed as many as 90,000 could be catching the virus every day.

The chief scientific adviser said that numbers are ‘still heading in the wrong direction’ but also admitted Britain’s outbreak appears to be slowing down.

Official data this afternoon shows that cases are 12 per cent higher than the 18,980 on Thursday last week – the smallest seven-day increase of any day of any day this week – while deaths are up 37 per cent from 138.

Speaking in a TV briefing alongside Prime Minister Boris Johnson, Sir Patrick showed slides that estimated there are somewhere between 22,000 and 90,000 new infections every day in England.

The startling upper estimate comes from a statement prepared by SAGE sub-group SPI-M, which provides regular virus modelling for Sir Patrick and has members known to be in favour of a national circuit breaker lockdown.

Office for National Statistics estimates are generally considered to be the most reliable measure, because they’re based directly on mass random swab testing of the English population, but they are a fortnight out of date.

Last Friday they estimated there were 27,800 new infections per day in the first week of October, including people who never get tested. A new estimate will be published tomorrow and Sir Patrick said he expects the figure to be significantly higher.

Sir Patrick also said it appears to now be taking between 14 and 18 days for cases in the country to double, slower than the estimated seven days in mid-September. Commenting on the weekly ONS data which estimates how many people currently have Covid-19 – last week putting the number at between 312,000 and 362,000 – Sir Patrick said: ‘We’re expecting the new numbers tomorrow and this will be higher, I’m sure, so we continue to see an increase in the total number of people with the virus.’

Then, explaining the new estimate of daily cases provided by SPI-M, he added: ‘The modelling consensus suggests that between 53 and 90,000 new infections per day may be occurring. 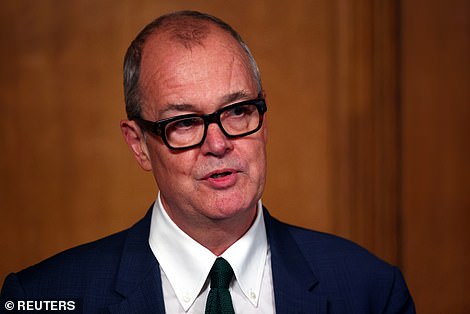 Pointing out that numbers of people being admitted to hospitals each day have risen significantly in the last month, he reminded people that admissions will continue to rise as a result of cases that have already happened because of the two-week delay between catching the virus and becoming seriously ill.

Despite the chief scientific adviser’s now-regular warnings that the outbreak is worrying and will kill many more people, Sir Patrick offered a glimmer of optimism and admitted there are signs of a slowdown.

The fact that the R rate remains above one – SAGE estimates it to be between 1.3 and 1.5 – means that ‘the epidemic is still growing,’ he said.

‘As long as R is above one the epidemic continues to grow and it will continue to grow at a reasonable rate – it’s doubling, perhaps, every 14 to 18 days – unless the R comes below one.

‘But I do want to say, there are some areas where we’re beginning to see real effects of what’s happening. There are some indications [that] amongst young people the rates are coming down or flattening off a bit due to the huge efforts that people have made to try to adhere to these changes in behaviours that we need to have in order to get this down.

The NHS Nightingale Hospital in Manchester will reopen in the next week as the city heads into a Tier Three lockdown and hospitals in neighbouring Liverpool are already treating more Covid-19 patients than in April.

A local NHS boss today announced the temporary hospital, set up in the Manchester Central Conference Centre, will be brought back into use before the end of next week. It will become the first one in England to reopen.

It had closed in June when the first wave of the UK’s outbreak burned out, but there are now fears that local hospitals will be inundated with Covid patients again.

The Nightingale will not be used to treat people seriously ill with coronavirus but instead opened to add capacity for ‘additional rehabilitation’. 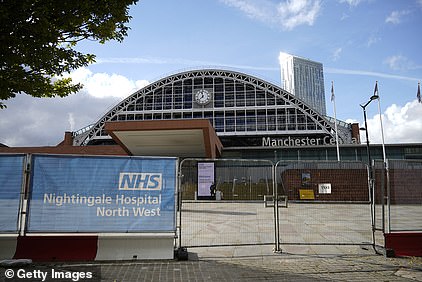 The city is entering Tier Three lockdown rules from midnight on Friday after a week of wrangling between the Government and the mayor, Andy Burnham, because the city has one of the highest infection rates in England.

There are fears that Manchester’s hospitals could start to become overrun with Covid-19 patients after an explosion of infections in late September.

In an announcement this morning, Professor Jane Eddleston, the boss of the Manchester University NHS Trust, confirmed the Nightingale would reopen.

‘We will be opening the Nightingale, we expect that to be towards the end of next week,’ she said.

‘The Nightingale will not be used as a critical care facility and neither was it in the first phase, it will be used as a facility for patients to have additional rehabilitation.’

Professor Eddleston said there are around 95 people in intensive care beds with Covid-19 in the city, which is slightly more than a third of the 260 at the peak of the epidemic in April.

Despite decreases in coronavirus case numbers the NHS has had to provide beds for patients with the disease throughout the summer, she said. The health service in the area has set up Covid-free zones so it can carry on treating other patients.

‘And in some areas of the country we can begin to see a little bit of flattening, possibly. So the measures are having an effect but we’re going to need to do more if the aim is to get R below one and to shrink this epidemic.’

Adding to evidence that England’s outbreak is not spiralling as quickly as it was at the end of September, Public Health England data shows that infection rates in the worst-hit student ares have dropped by half in a week up to October 11.

Covid-19 cases among teenagers and people in their 20s were blamed for fuelling the fire of England’s second wave of the disease with numbers of positive tests spiralling after universities and schools returned in September.

Official statistics show that infection rates have been up to seven times higher in boroughs with large student populations than in the cities that contain them, but data now reveals that cases have plummeted in the five worst-hit areas even though none of them are yet in the toughest Tier Three lockdown rules.

In the University Park area of Nottingham, which had the most positive cases of anywhere in England in the week to October 4, the infection rate dropped by a third (32 per cent) the following week, up to October 11. However a staggering four per cent of the area’s 11,000 residents still tested positive in that week.

Other student-heavy areas in the worst-affected parts of the country saw significant drops, too, including Rusholme East and Ladybarn in Manchester, with declines of 61 and 64 per cent respectively; Pennsylvania & University in Exeter (down 41 per cent); University & Little Woodhouse in Leeds (55 per cent) and Broomhall in Sheffield (22 per cent).

Graphs presented in a TV briefing this week by Professor Jonathan Van-Tam, England’s deputy chief medical officer, showed that infection rates among under-30s have turned and are now declining. He warned, however, that the rapid surges in those groups in September have now ‘penetrated’ the older groups, who are more likely to die if they catch the virus.

And Matt Hancock told a weekly ‘gold command’ meeting of the Joint Biosecurity Centre yesterday that cases are now coming down among young people after weeks of continuous increases.

Prime Minister Boris Johnson has resisted repeated calls from top scientific advisers for a ‘circuit breaker’ national lockdown and is sticking to his three-tier local lockdown system, which has so far imposed the toughest levels of restrictions on around seven million people in the North of England, particularly Liverpool, Manchester and Yorkshire.

Stoke-on-Trent, Coventry and Slough will all move into Tier 2 lockdowns on Saturday, Matt Hancock revealed today amid fears Nottinghamshire’s restrictions will be toughened up.

The Health Secretary’s announcement in the House of Commons means another 745,000 people will be stung by tighter restrictions, including a ban on socialising indoors. Nearly 40million people across Britain will be living under lockdowns, when all the measures are fully enforced.

He also warned that officials are now discussing the prospect of thrusting Warrington in Cheshire into Tier 3 because of a ‘continuing rise in cases’. Local bosses in Nottinghamshire are also understood to be thrashing out plans to move parts of the county into the toughest bracket because of spiralling cases. Boldly going: Trump says he will ‘take a good, strong look’ at whether UFOs exist