Shaun Bailey’s campaign has today served up their own version of the Great British Bake Off slamming Sadiq Khan for having a ‘half-baked’ approach to running London.

The Tory London mayoral candidate has hit out at the current mayor Khan for a ‘huge rise in crime across the capital’, and his ‘poor’ management of housing and transport.

In a campaign video delivering a political take on The Great British Bake Off, narrated by Esther McVey MP, doppelgangers of Paul Hollywood and Prue Leith slam Khan’s ‘London cake’ as a ‘mess’.

Today Bailey said that ‘Coronavirus has exposed the deep problems facing London’ and slammed Khan for ‘trying to have his cake and eat it to’, stating ‘Londoners deserve better’.

He stated that under Khan homicides in the capital had risen to its highest level in 11 years, with a 39 per cent rise in knife crime.

In the campaign video Shaun Bailey, 49, presents his cake, apparently representing his vision for London, to great praise from the Paul Hollywood and Prue Leith lookalikes (pictured)

The London Mayoral candidate then highlighted the £110m in police cuts announced by Khan in June and the £38m axed from the police budget, which Bailey called Khan’s ‘first act as Mayor’.

Bailey said: ‘Sadiq Khan wants to be Mayor but he doesn’t want to live up to the responsibilities of his job. He’s trying to have his cake and eat it too.

Bailey’s campaign claimed that: ‘Under Khan, London’s economy has lost almost £1 million every day, due to delays and cancellations on the tube. At the same time TfL has been bankrupted by Khan’s poor decisions and mismanagement. 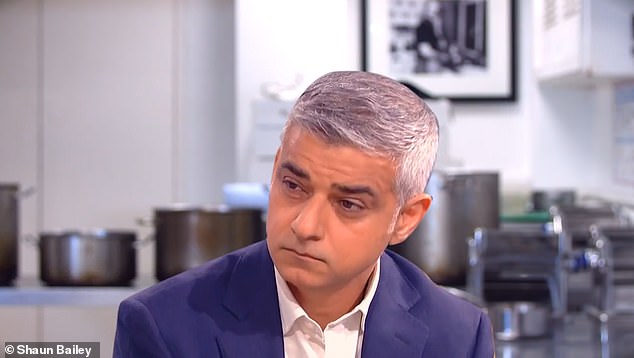 Clips of Khan, 50, in City Hall have been doctored into the campaign video, with Khan appearing to shake his head as the judges berating his ‘poor performance as Mayor’ ‘His inefficient spending includes £50m squandered on water coolers, staff taxis and luxury coffee machines, and over £828m that could have been saved by reforming TfL’s gold-plated pensions.’

Clips of Khan, 50, in City Hall have been doctored into the campaign video, with Khan appearing to shake his head as the judges berate his ‘poor performance as Mayor’ and suggest he could have delivered more in ‘four years’.

In the video Bailey, 49, presents his well-iced cake topped with a policeman, apparently representing his vision for London, receiving great praise from the Paul Hollywood and Prue Leith lookalikes. 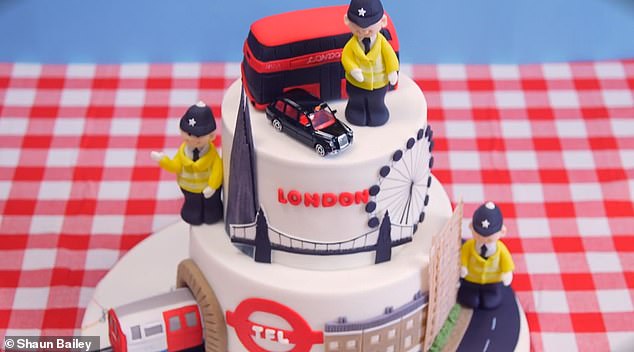 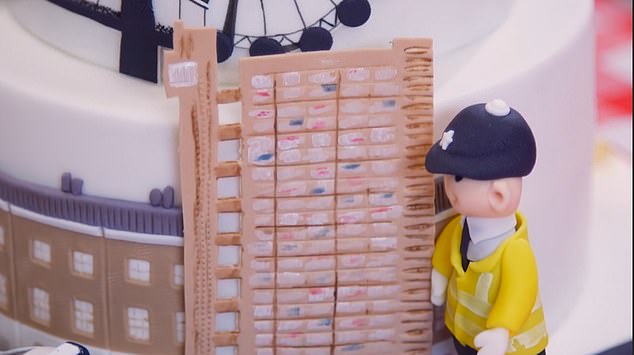 Shaun’s cake featured the Trellick estate, the west London housing estate he grew up on The judges commend the Mayor hopeful’s cake for ‘substance’, commenting on the police focus, the more affordable housing and a better-managed transport system that Bailey promises.

Bailey announced his policy to recruit a further 8,000 police officers earlier this month.

His other policies include introducing Housing for London to deliver affordable housing to the city, and an overhaul of TfL’s finances. Shaun Bailey, 49, whose grandparents were Jamaican Windrush-generation immigrants, is the Conservative’s mayoral hopeful

Bailey also criticised the Mayor for the slow creation of affordable homes, stating that with the budget of £4.82bn to deliver 116,000 homes, Khan had only started half of these in four years.

Today Khan performed an abrupt U-Turn to demand an ‘immediate’ end to the 10pm pub curfew in London, having previously supported it to control coronavirus.

The city mayor, who led the political push for harsher lockdown measures to be introduced in the capital, has now decided it needed to be removed to aid the recovery of the restaurant trade.

Under the Tier 2 restrictions he pushed for, introduced in London last Saturday, pubs and restaurants can only serve single-household customers, providing they abide by the rule of six and close their doors at 10pm. What if I can’t pay the bill to remove cladding on my block of flats?