So is THAT what all the fuss was about? More than 100 birdwatchers descend on Norfolk salt marsh to catch glimpse of a rufous bush chat that has not been seen in UK for 40 years

By Shari Miller For Mailonline

Unlike other exotic birds with their vibrant plumage and striking songs, this one just has pale brown feathers and a thrush-like trill described as having a sad tone.

Yet bird lovers are still all of aflutter, because the rufous bush chat has not been seen on UK shores for 40 years – until now.

More than 100 birdwatchers have already descended on Stiffkey, north Norfolk, with binoculars at the ready to catch a glimpse of the rare species, which is more used to spending its winters in Africa and Asia, rather than the much colder climes of British salt marshes.

Also known as the rufous warbler and rufous bush robin, the bird is more commonly seen in southern Spain, Africa and the Balkans.

The last time a rufous bush chat was recorded in Britain was at Prawle Point in Devon, in 1980.

Dick Filby, of Rare Bird Alert, told bbc.co.uk the bird ‘would have been heading for a tropical climate and went the wrong way.’ More than 100 enthusiasts flocked to Stiffkey, Norfolk, in the hope of seeing the species The bird is more commonly seen in warmer climes, rather than the salt marshes of Norfolk Those who were lucky enough to spy  the bird for themselves have been busy posting their pictures – and most appropriately – tweeting about it.

Paul Nobbs @Fenlandbirding wrote on Twitter:  ‘Just got lucky with the Rufous Bush Chat. Popped up in front of me away from the main crowd!’ ‘The quickest re-route in history and we were watching it soon after. After a couple of flight views, awesome views as it fed at the edge of the field to a well spaced crowd.’

What is the Rufous Bush Chat? 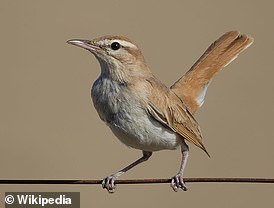 Breeds around Mediterranean and east to Pakstan

Winters in east Africa and India

Builds nest in a bush, with three to five eggs in a clutch

Larger than the European robin, it has brown upperparts and whitish underparts and a prominent white eyestripe

The tail is long and frequently fanned, showing black and white tips

LeBron James reacts to the police shooting of Jacob Blake, saying ‘we think you’re hunting us’

Brian Martin @BrianSmrtyr1 also expressed his surprise at seeing one so close to home. He wrote: ‘I have hoped to find one of these when I was in Spain, but never expected to see one in the UK – a Rufous-tailed Scrub Robin at Stiffkey yesterday afternoon.’

While acknowledging this rare event on British shores has caused excitement among nature lovers, Norfolk police has issued a warning against crowds gathering at the location and for people to maintain Covid safety guidelines.

Chief Superintendent Chris Balmer said: ‘We would ask that people do not continue to attend the location as we have had to remind many of the Covid regulations.

‘People may arrive on their own, but some have started to gather in groups larger than six to be able to see the bird.

‘This is a breach of the law. In the first instance, officers will engage, explain and encourage people to leave, but enforcement is an option and we will be issuing fixed penalty notices should people not comply.

‘We want everyone in Norfolk to remain safe and this means everyone needs to adhere to the regulations.’

The bird, which is larger than the European robin and sports a long tail, prefers dry open country with bushes and shrubs and builds its nest a few feet off the ground in bushes, tree stumps or other concealed places.

The rufous-tailed scrub robin inhabits dry open country with bushes and shrubs and feeds on insects such as beetles, grasshoppers, the larvae of butterflies and moths, and earthworms.

This is the shake that Mayeli Alonso sells to lose weight! | The NY Journal

The Raptors in Louisville for the next season?