One of the filthiest tactics of the Panic Merchants is to claim that anyone who opposes their strangling of the country is callous and cares only about money, not life.

Dissenters have been pelted with slime of this kind by Johnson, the man who ruined Britain, and by his dense sidekick, Hancock – perhaps the first Health Secretary in history who does not know that malaria is spread by mosquitoes. They tell us we wish to ‘let the virus rip’.

Well, Johnson and Hancock, if you care so much about lives, get in touch with Lisa King, as I did. Ask her to tell you about how her husband Peter, a retired taxi driver aged 62, died.

One of the filthiest tactics of the Panic Merchants is to claim that anyone who opposes their strangling of the country is callous and cares only about money, not life

It is a horrible, upsetting story, involving a grown man screaming in agony. And in my view it is an absolutely direct consequence of Hancock’s conversion of the NHS into a National Covid Service which treats everything else as a nuisance.

Peter King was grudgingly granted (as so many now are) a remote session with a GP who, unable to meet him, and apparently ignorant of his records, diagnosed his severe chest discomfort as reflux. I am not especially interested in blaming this doctor. Under the conditions created by Hancock, he was presumably doing his best. 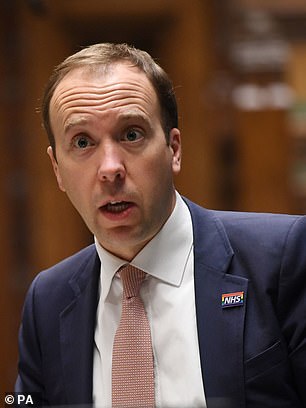 Dissenters have been pelted with slime of this kind by Johnson, the man who ruined Britain, and by his dense sidekick, Hancock – perhaps the first Health Secretary in history who does not know that malaria is spread by mosquitoes. They tell us we wish to ‘let the virus rip’

But it was not good enough. Actually the trouble was far more serious – a stone trapped in his gall bladder – and the resulting delay meant he was overcome with indescribable pain a few days later.

Peter was given emergency surgery to reduce the agony, but needed a more radical operation. He was put on the urgent list for it. But this was still too late.

He fell terribly ill again and despite the heroic efforts of paramedics, he died. The many years of happy life which Peter and Lisa King might otherwise have had were wiped out for ever.

This is not just some isolated case. Something like 25 million appointments with GPs have been lost as a result of the Johnson Government’s panic (not as a result of Covid, as the hopelessly pro-Government BBC always says. The Government had a choice over how to respond, and took the wrong path).

Millions have not had referrals for diagnoses including cancer and heart disease. Some of them will have been scythed down as Peter King was. Others will have been needlessly damaged in smaller, slower ways.

But this is what Johnson and Hancock have let rip – needless pain, needless death. Let them never again dare to pretend that their original bungle, and the later months in which they have tried to save themselves from deserved disgrace, were the only way to save lives.

I suspect their panic may well in the end kill more than Covid ever did or could have done. We are in the hands of fools who will not admit they have made a terrible mistake. Johnson and Hancock, if you care so much about lives, get in touch with Lisa King, as I did. Ask her to tell you about how her husband Peter (pictured together), a retired taxi driver aged 62, died

Those still taken in by the cuddly, caring ‘Boris’ image of Prime Minister Johnson may wish to study his impatient, callous response to a distressing question in the Commons last week about the absurd cladding rules which are preventing thousands from moving home, often at horrible personal cost.

Dulwich MP Helen Hayes asked about a constituent, Luke Thomas, recently diagnosed with terminal cancer. He urgently needs to move closer to his family for support but cannot sell his flat as it does not have the accursed EWS1 form (mentioned here last week) which is pointlessly blocking so many from moving.

Mr Thomas has no time to wait for relief. Ms Hayes asked: ‘When will the Prime Minister end this scandal?’ He brushed this off, referring her to an equally useless answer he gave earlier. If he cares, it does not show.

If only this grim nightmare was still just fiction

So far, the new Sky TV version of Aldous Huxley’s Brave New World is not as bad as I feared it would be. It is hard to bring this brilliant, bitter book to the screen. So much of Huxley’s fantasy came true long before he predicted it would, so a lot of it is just not shocking any more.

When Huxley wrote it in the 1930s, lifelong marriage was normal and looked as if it would stay that way, children were the expected result of sex, and drug-taking was despised.

His clever idea that a future society would actively encourage promiscuity, abolish parenthood and privacy, and make drug-taking compulsory was too good a prophecy. It’s almost all happened. And, as Huxley feared, we have come to love our own enslavement by pleasure.

I use to think Huxley had been completely right and George Orwell’s alternative nightmare of a surveillance state based on terror, secret police spies and torture had been wrong. But recently I’ve come to the grim conclusion that we will end up with a mixture of both.

On one thing, they both agreed. Hell, whichever sort we end up with, will use the metric system.

The supposedly moderate Labour leader Sir Keir Starmer has at last revealed himself as the fanatic he really is, with his wild calls for even more mass destruction of the jobs and livelihoods of Labour voters in a so-called ‘circuit-breaker’.

I am not surprised. Most people who report on politics in this country do not understand the subject, lacking the Marxist training which I had in my distant youth. They call Sir Keir ‘moderate’ because he is not Jeremy Corbyn. A fat lot they know.

Jeremy Corbyn is, of course, a wild Leftist, a man of clenched-fist salutes, street protests and red banners who probably dreams of storming Buckingham Palace at the head of a detachment of Red Guards.

But he is one of the obvious, old-fashioned sort, steam-powered, coal-fired. You can see him a mile off and defeat him with ease. Sir Keir is much more dangerous. His fanaticism is as smooth as the moisturiser he applies daily to his handsome face. It is designed for the age of the internet.

But you will have to search hard for any major media mention of his stint, in his mid-20s, on the editorial board of a Trotskyist magazine called Socialist Alternatives. Its few issues can still be read on the internet. I have read them, though most of Sir Keir’s articles were written with the blunt end of a bread pudding, and are hard going. Most people who report on politics in this country do not understand the subject, lacking the Marxist training which I had in my distant youth. They call Sir Keir ‘moderate’ because he is not Jeremy Corbyn. A fat lot they know

Ah, you may say, this was just youthful folly. People change. He’s even taken a knighthood. Except Sir Keir has not changed much. This is the age he was born for.

In an interview with the New Statesman, he recently said: ‘I don’t think there are big issues on which I’ve changed my mind… The big issue we were grappling with then was how the Labour Party, or the Left generally, bound together the wider movement and its strands of equality – feminist politics, green politics, LGBT – which I thought was incredibly exciting, incredibly important. Broadly speaking, I think the Labour Party has done that very successfully.’

The sect he was mixed up with in the 1980s helped pioneer the New Left – Green mixed with Red, radical sexual politics. ‘Red must be made Green, and Green must be made Red,’ they said. This way of thinking has no time for the clapped-out yelling and posturing of the Corbynites.

It wants a cultural revolution which leaves all the buildings standing but changes everything that goes on inside them. It might find a huge economic and social convulsion, such as Johnson has visited on us, very convenient for that purpose.