Paramedics finish cutting the grass for Vietnam War veteran, 83, who collapsed from heat exhaustion while mowing his lawn

By Ariel Zilber For Dailymail.com

An 83-year-old war veteran who collapsed from heat exhaustion while mowing his lawn on a hot South Florida day got a helping hand from first responders who were happy to cut his grass to show their appreciation for his service.

Prince Pinkney, a Vietnam War veteran who lives in Fort Lauderdale, was doing yard work in front of his home on Monday when the 91-degree heat took its toll.

‘It was hot, and I got overheated,’ he told WSVN-TV.

Pinkney said that one of his legs, which never fully recovered after he suffered a stroke years ago, gave out on him.

‘When it gave out, I just fell right in the yard out there,’ he said.

Paramedics with Fort Lauderdale Fire Rescue pose with Prince Pinkney (third from right), 83, and his wife, Rebecca (second from left), at their home in Fort Lauderdale Prince Pinkney (right) collapsed from heat exhaustion while mowing his lawn. A passerby saw that his wife, Rebecca (left), struggled to help him up. That’s when first responders were called to the home After Pinkney collapsed from heat exhaustion, paramedics treated him until he fully recovered. They then took it upon themselves to finish mowing his lawn 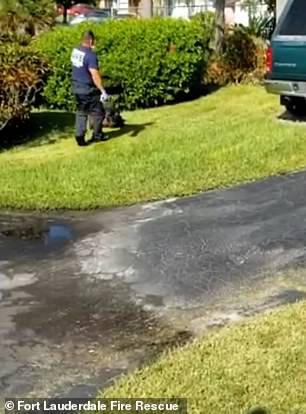 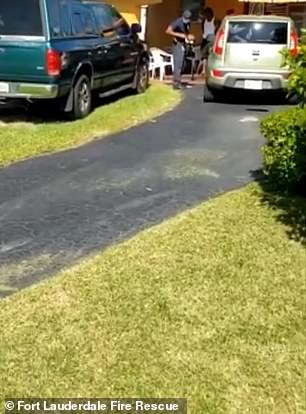 His wife, Rebecca, tried to help him.

A passerby who saw Pinkney on the ground while his wife struggled to help him up alerted first responders.

The Fort Lauderdale Fire Rescue immediately dispatched a crew of paramedics and firefighters to the home on Southwest Third Court in the Melrose Manors section of the city.

‘We treated them and checked them out,’ said FLFR Lieutenant Matthew Wells. 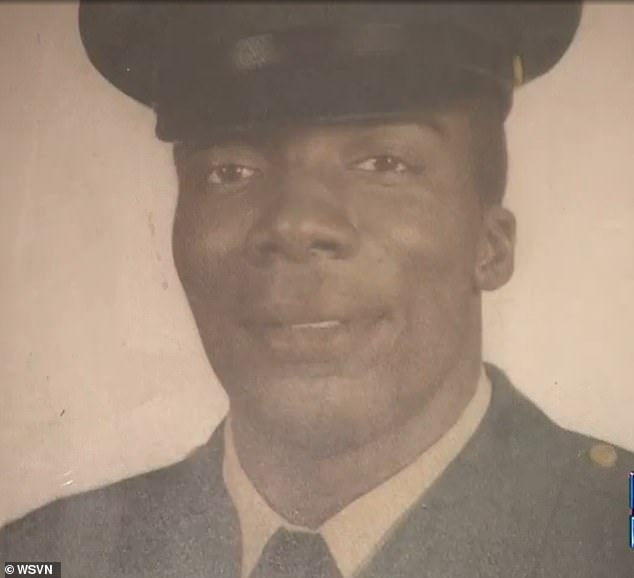 Pinkney was given treatment and recovered, but the crew would not leave until his lawn was mowed as he intended.

The crew said they were honored to lend a helping hand to Pinkney, who was drafted in the military more than 50 years ago and served as a missile tech in Vietnam.

‘Their story is amazing in itself,’ FLFR Captain Terry Maylor told WSVN.

‘Their age, what they’ve gone through, his history as a veteran serving this country.

‘If that doesn’t move you to go ahead and do what you’re capable of, then nothing will.’ Convertible JFK rode in on the morning of his assassination may fetch up to $500,000 at auction

Viewers hit out at Netflix employees Megan, Harry and the Obamas as they stay ‘silent’ on ‘Cuties’