Pet dog protects girl: Golden retriever Harry prevents toddler from being told off by her mother

By Ian Randall For Mailonline

Earth’s toughest creatures — the tiny tardigrades — include species that can survive deadly UV radiation by glowing in the dark, a study has found.

They can tolerate heats of 300°F (150°C) to the coldness of space, dry out and revive years later and stand pressures six times those found in the Mariana Trench.

And a study last year revealed that the resilient little critters can even survive the equivalent amount of nuclear radiation as 25 hours at Chernobyl’s ground zero.

However, researchers from India have reported finding a new genus — dubbed ‘Paramacrobiotus’ — which can also resist germicidal levels of UV exposure.

It does this by employing a protective fluorescent shield that absorbs the damaging ultraviolet radiation and emits it back out as harmless blue light.

Earth’s toughest creatures — the tiny tardigrades — include species that can survive deadly UV radiation by glowing in the dark, a study has found. Pictured, Paramacrobiotus glows blue

‘Our study showed that specimens of Paramacrobiotus […] exhibit natural fluorescence under UV light, which protects tardigrades against the lethal doses of UV radiation,’ biochemist Harikumar Suma and colleagues wrote in their paper.

The tiny creature, the team from the Indian Institute of Science explained, ‘has probably evolved this fluorescence mechanism to counter [the] high ultraviolet radiation of tropical southern India — UV index can reach up to 10.’

‘The UV dose in this location — Bengaluru, India — on a typical summer day is about four kilojoules per square metre.’

The tardigrades the team studied were isolated from a moss sample grown on a concrete wall in their home town of Bengaluru.

The researchers found that when they exposed Paramacrobiotus to UV radiation for 15 minutes — enough to kill another tardigrade species, H. exemplaris — the new genus not only survived, but surprisingly emitted a blue glow.

When the team coated H. exemplaris and the roundworm, ‘Caenorhabditis elegans’ in fluorescent extracts from Paramacrobiotus, they found that they were able to transfer some of the protection.

After a few days of UV exposure, half of the treated H. exemplaris remained alive despite having been given a dose that should have been lethal. 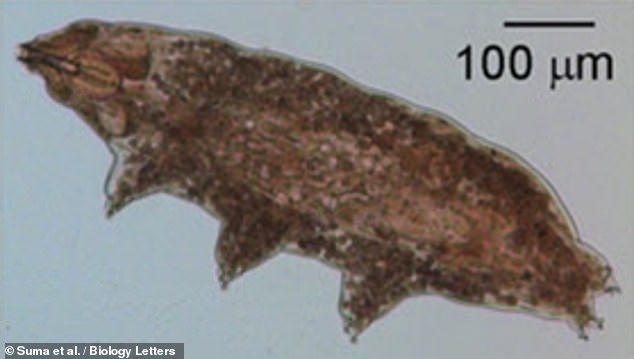 Tardigrades can tolerate heats of 300°F (150°C) to the coldness of space, dry out and revive years later, stand pressures six times those found in the Mariana Trench and even resist the same amount of ionising radiation as spending 25 hours at Chernobyl ground zero

The study adds to previous work showing that substances produced by tardigrades have the potential to protect other organisms from harmful conditions, biologist Łukasz Kaczmarek — who was not involved in the work — told the Guardian.

The expert from Poland’s Adam Mickiewicz University added, however, that the team had not identified the exact substance responsible for the UV protection, raising the possibility that protective proteins — not the fluorescence — might be responsible.

‘We also do not know if it is a characteristic feature of the species studied or rather for the majority of tardigrades exposed in their natural environment to high doses of UV radiation,’ Dr Kaczmarek told the Guardian.

The full findings of the study were published in the journal Biology Letters.

Tardigrades, also known as water bears, are said to be the most indestructible animals in the world.

These small, segmented creatures come in many forms – there are more than 900 species of them – and they’re found everywhere in the world, from the highest mountains to the deepest oceans. Tardigrades, also known as water bears, are said to be the most indestructible animals in the world.

They have eight legs (four pairs) and each leg has four to eight claws that resemble the claws of a bear.

Boil the 1mm creatures, freeze them, dry them, expose them to radiation and they’re so resilient they’ll still be alive 200 years later. 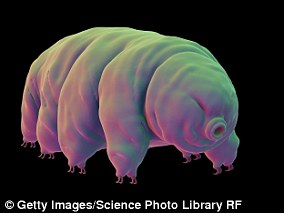 An illustration of a tardigrade (water bear) is pictured

Water bears can live through temperatures as low as -457 degrees, heat as high as 357 degrees, and 5,700 grays of radiation, when 10-20 grays would kill humans and most other animals.

Tardigrades have been around for 530 million years and outlived the dinosaurs.

The animals can also live for a decade without water and even survive in space.

Samsung begins wider rollout of Android 11 and One UI 3.0 to latest phones

Pet dog protects girl: Golden retriever Harry prevents toddler from being told off by her mother

Last picture of Instagram influencer, 26, before she was found dead on side of Texas road

RHOA star Cynthia Bailey says move to LA could be in her future, would be willing to appear on RHOBH

Catholic priest named as child abuser was at church camp in 1958 when deaf boy, 10, disappeared