Much of the world will probably be wearing masks ‘for couple of years,’ warns a prominent Spanish virologist.

‘We will get over this in some years, but we don’t have to expect this is going tobe a hundred-meter run,’ Dr Margarita del Val, the head of the Spanish National Research Council (CSIC) – Salud Global/Global Health told MarketWatch.

‘It’s going to be a marathon.’

Much like the US, Spanish health officials like Dr del Val have found themselves at odds with in-fighting politicians on how to manage the coronavirus crisis.

Spain is now the hardest-hit country in Europe, again, and enacted more restrictions on Friday in the hopes of slowing the once-more accelerating spread of coronavirus. Masks are required outside the home and gatherings are limited to six people, including seating-groups at bars and restaurants, where occupancy is capped.

Pandemic fatigue set in long ago among Spaniards, who were first locked down on March 14 amid the country’s first surge of COVID-19 cases. Amid anger from the residents of Spain’s capital, a court there blocked lockdown measures on Thursday.

Yet cases are surging there, with 10,981 cases and 196 new deaths reported yesterday.

Dr del Val’s caution echoes the sentiments of US infectious disease specialist Dr Anthony Fauci, who said last week during a Facebook Live event with New Jersey Governor Phil Murphy that, even if 75 or 80 percent of the US was vaccinated, ‘it is not going to eliminate the need to be prudent and careful with our public health measures.’

Coronavirus was first detected in the US and Spain alike in January of 2020.

In the intervening nearly-10 months, each nation has approached the tipping point for its health care systems, masks have become the norm, and cases have fallen back to tolerable rates.

Americans and Spaniards alike began to relax, enjoying warm weather and the opportunity to gather in the relative safety of outdoor, open air spaces.

‘I think when people were eating and drinking outside, which was taking one measure, open air, which is good, they were forgetting a second measure…either distance or masks,’ Dr del Val said.

She noted that while stay-at-home orders were lifted, Spain’s street, restaurants, bars and public transportation began to look as closely packed as they had pre-pandemic.

But being in close proximity to other people will continue to be a problem so long as the virus is circulating in the world (as it’s apt to do even more actively as temperatures drop across the Northern Hemisphere) – up until and likely after vaccines are available.

Johnson & Johnson has struck a deal with the European Union, including Spain, for enough of its single-dose vaccine to inoculate 200 million people, with the option for the EU to acquire another 200 million doses down the road.

Its vaccine lags behind the other US-based top competitors. J&J does not expect to have its vaccine ready until January 2021. Spain, the rest of the EU and the US will all face at least two months without the protection the pharma giant’s shot might provide. 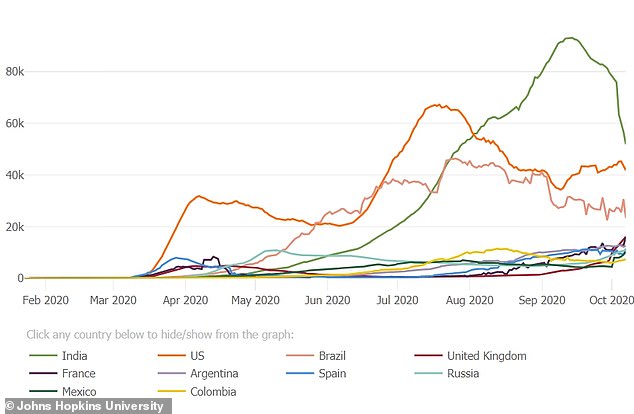 In sheer numbers of daily new cases, Spain (blue) is seeing far fewer than the US (orange), but it’s in the midst of an alarming spike of per capita infections, Johns Hopkins data shows

Johnson & Johnson’s vaccine is easier to transport and deliver, so it may be distributed more quickly and cheaply.

Spain is contracting with other vaccine makers as well, including AstraZeneca, which is making the shot developed by Oxford University, and will have two million doses by December.

The US expects to have 100 million doses of vaccine at the ready by December and 700 million by next April, Dr Fauci has projected.

But there will be an inevitable lag between the approval of any vaccine, its distribution and the public adoption of a vaccine.

Currently, only about half of Americans say they plan to get a coronavirus vaccine once one is approved.

And 30 percent of Spaniards had reservations about getting vaccinated as of late August.

In the interim, regulators review and approve vaccines, drug companies ramp up manufacturing to churn them out, and people the world over learn to trust immunizations made at breakneck pace in the face of crisis, treatment of early infection and/or prevention of infection…[will be] the bridge to the vaccine,’ Dr Fauci said during a recent JAMA interview. President Trump has switched his focus back to COVID-19 treatments after receiving one himself, extolling the virtues of the Regeneron antibody drug he was given to treat his own coronavirus infection, and shoving it toward emergency approval.

He continues to eschew one of the most well-proven preventive measures, however: masks. The president tore his off his face to address the press as soon as he arrived back on the White House verandah from his time at Walter Reed National Medical Center.

When asked about the president’s tendency to shrug off the usefulness of masks during Senate testimony, Centers for Disease Control and Prevention (CDC) director Dr Robert Redfield suggested they might be more important than vaccines, at least for now.

‘I might even go so far as to say that this face mask is more guaranteed to protect me against COVID than when I take a COVID vaccine, because it may be 70 percent. And if I don’t get an immune response, the vaccine is not going to protect me.

‘This face mask will.’

And with the many holes in the potential coverage offered by a vaccine, those masks may remain a better tool for some time to come, Dr del Val said.

‘We have to get used to wearing a mask and taking a couple of measures for a couple of years, and integrate them into our daily lives, forget about them, they will turn into something that is useful to you,’ she said.