Black Lives Matter supporters have attacked homes in a Milwaukee suburb, smashing windows on a quiet residential street after a black cop was cleared in the shooting death of an armed black teenager.

The violence followed a district attorney’s decision on Wednesday that police officer Joseph Mensah was justified when he shot Alvin Cole on February 2, after the 17-year-old fired a stolen handgun outside Mayfair Mall in Wauwatosa.

After nightfall on Wednesday, demonstrators smashed out storefront windows in Wauwatosa before marching down a residential street and hurling large rocks through the windows of homes, according police.

The mayhem was caught on camera by by Julio Rosas, a reporter for the conservative publication Townhall, who said that some of the people in the crowd attempted to stop others from attacking the homes.

Protesters march around a line of National Guardsmen protecting the Wauwautosa City Hall, late Wednesday. Soon after, a mob began to attack homes in the city 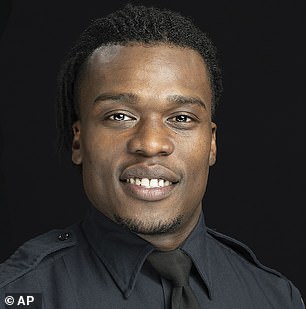 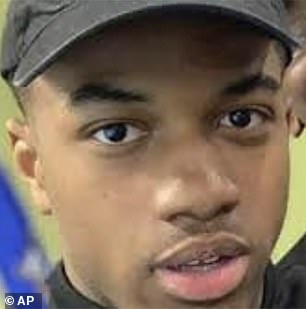 Wauwatosa Police declared an unlawful assembly shortly before 9pm, and established a protective perimeter around Wauwatosa City Hall with the aid of the National Guard.

‘Individuals in the group are throwing large rocks at law enforcement and buildings in the area of Swan Bl / W North Av,’ the department said in a statement.

‘Residents in this area are advised to shelter in their homes, lock their doors, and move away from windows.’

‘The crowd was ordered to disperse due to being an unlawful assembly, and has refused. Law enforcement has deployed gas to safely disperse the group,’ the department said.

In video shot by Rosas, one outraged resident is heard telling the mob that they are targeting people who may support their cause.

‘Do you have any idea how many Democrats, how many MPS teachers, union members, other people that support you live on this street?’ shouts the man.

‘Show some respect!’ the man demanded, seconds after a motorcycle tore across his lawn. ‘Police your protest.’

As the BLM crowd was marching through the neighborhoods of Wauwatosa, one man came out to tell people to get off of his property, telling them there are people who most likely support BLM. One guy drove on his yard with a motorcycle. pic.twitter.com/yxOyZXqMOQ 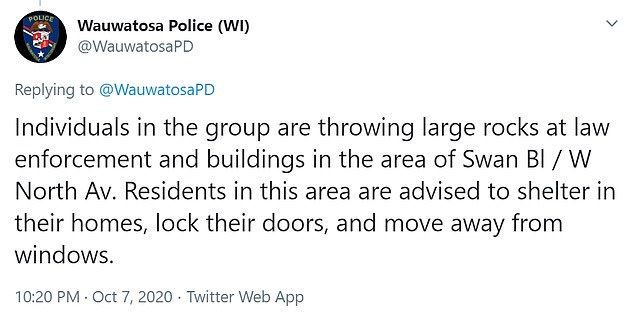 The crowd then began to loot a gas station convenience store, grabbing armfuls of snacks, soft drinks, and beer.

‘We need them blunts back there,’ one person is heard shouting in Rosas’ footage, referring to cheap cigars which are used to smoke marijuana.

Video from the scene shows cars driving on sidewalks and motorcycles tearing across laws as the mob shines bright lights into the windows of homes.

It came hours after Milwaukee County District Attorney John Chisholm announced that he found Mensah was justified when he shot Cole on February 2.

‘In this case, there is sufficient evidence that officer Mensah had an actual subjective belief that deadly force was necessary and that belief was objectively reasonable,’ Chisholm said.

Mensah was involved in two other deadly shootings over the last five years. Mensah remains on administrative suspension pending proceedings with the Wauwatosa Police and Fire Commission.

The ruling comes after a summer of protests, some violent, across the United States over racial injustice, sparked by the death of an unarmed black man, George Floyd, while in the custody of Minneapolis police in May. In preparation of possible civil unrest, Wisconsin Governor Tony Evers authorized the Wisconsin National Guard to respond to Wauwatosa. There have been demonstrations in the city to the west of Milwaukee since the shooting of Cole.

‘I am not surprised by this miscarriage of justice,’ said State Representative David Bowen in a statement after learning of the ruling. ‘It is past time for systemic transformation.’

On February 2 at about 5.30pm, Cole entered the Mayfair Mall with a semi-automatic pistol in a bag over his shoulder. Cole then got into an argument with another man and displayed his weapon.

Mall security told Cole to leave the mall and contacted the police. When police confronted Cole outside the shopping center, he ran.

During the pursuit, Cole shot himself in the arm and fell before he pointed his gun at officers. Mensah opened fire, killing Cole, district attorney Chisholm wrote in his report.

Taapsee Pannu strikes some cool poses during Maldives vacation, says ‘after all we are tourists’. See pics