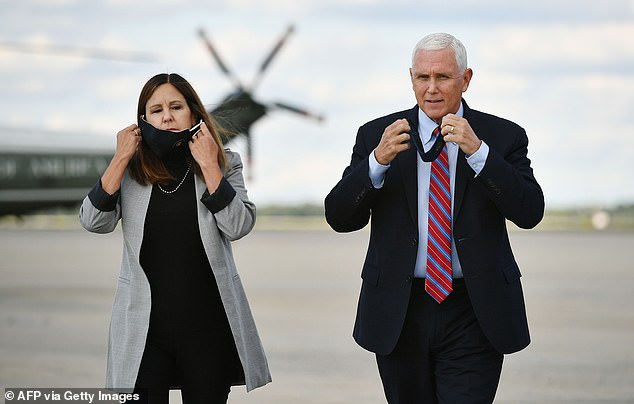 Throughout the day, both Pence’s doctor and the Centers for Disease Control and Prevention director, Dr. Robert Redfield, sent out letters explaining the vice president hadn’t had enough contact with President Donald Trump to quarantine.

Pence’s Chief of Staff Marc Short told The Washington Post that plexiglass barriers aren’t necessary, as the candidates will already be 12 feet away from one another. Democratic vice presidential nominee Kamala Harris’ team said, ‘If the Trump administration’s war on masks has now become a war on safety shields, that tells you everything you need to know about why their COVID response is a failure’ The debate hall at the University of Utah is being set up for Wednesday’s vice presidential debate, but the campaigns were still bickering over whether there will be plexiglass set up between the two candidates through Tuesday evening The White House put out two health updates on Pence Tuesday, one from his doctor and one from CDC Director Robert Redfield, explaining that none of the people the vice president interacted were ‘close contacts’ despite him being in the Rose Garden on September 26 Pence was also seated front row at a Gold Star families event Sunday, September 27 where at least one person has tested positive for COVID-19. The vice president, however, wasn’t seated close enough to the individual for him to fall under CDC’s quarantine guidelines

‘If she wants it, she’s more than welcome to surround herself with plexiglass if that makes her feel more comfortable,’ Short told The Washington Post. ‘It’s not needed.’

Earlier Tuesday, the plexiglass matter had seemed settled, until Short’s comment were made public.

A spokeswoman for the Debate Commission did not respond to DailyMail.com’s request for comment.

Harris spokesperson Sabrina Singh told DailyMail.com that the Democratic vice presidential nominee ‘will be at the debate, respecting the protections that the Cleveland Clinic has put in place to promote safety for all concerned.’

‘If the Trump administration’s war on masks has now become a war on safety shields, that tells you everything you need to know about why their COVID response is a failure,’ Singh also offered.

Pence traveled to Salt Lake City Monday in advance of his doctor releasing a statement explaining why the vice president was cleared to go after appearing at events where officials have since tested positive – including the September 26 Rose Garden ceremony where Trump announced his selection of Judge Amy Coney Barrett for the Supreme Court.

He also appeared at an event Sunday for Gold Star families where at least one individual tested positive.

‘Vice President Mike Pence is not a close contact with any individuals who have tested positive for COVID-19, including President Donald J. Trump and senior members of the White House administration, according to the guidelines of the Centers for Disease Control.’

‘Vice President Mike Pence is encouraged to go about his normal activities and does not need to quarantine,’ Pence’s physician, Dr. Jesse Schonau, said.

That statement was followed up later Tuesday by a memo signed by Redfield who explained that a ‘close contact’ is ‘any individual who was within 6 feet of an infected person for at least 15 minutes from 2 days before illness onset until the time the patient is isolated as defined by CDC guidance.’

Pence is being tested using both antigen tests and the more accurate PCR tests, his doctor also said.

Plexiglass has been used at several other debates during the COVID era thus far – and, in one case, to make a political point.

Democratic Senate candidate Jaime Harrison brought his own plexiglass set-up with him to the South Carolina debate against Sen. Lindsey Graham Saturday, which took place after Trump was deemed positive.

A number of Senate Republicans have tested positive too. If plexiglass was erected at the vice presidential debate it would be a constant reminder of the pandemic, despite the Trump campaign and the White House wanting to move on.

It’s still unclear how much damage the president’s diagnosis has done to the Trump-Pence ticket’s re-election bid.

Pence, however, has been here before.

When he debated Democratic vice presidential nominee Tim Kaine four years ago, the BBC reported that Pence’s ‘only job – was to stop the bleeding and give the campaign an opportunity to regroup.’

While the veep debate was held three days before the ‘Access Hollywood’ ‘grab ’em by the p****’ tape was released, Trump’s campaign was already hobbled by his initial debate performance and a New York Times story detailing his massive business losses, which allowed him to write off income taxes for years.

Before Friday’s shock coronavirus diagnosis, reviews of Trump’s Tuesday night debate performance were that it was ‘belligerent,’ ‘aggressive’ and ‘violent.’ And then there was the September 27 New York Times story that revealed he had paid just $750 in federal income taxes during his first year in office.

At the 2016 debate, held on October 4 at Longwood University in Virginia, Kaine made the same mistake as Trump in this year’s first debate – he came in too hot.

As Pence would unfold an argument – such as tying Democratic nominee Hillary Clinton to President Barack Obama’s foreign policy, which in turn failed the Middle East and emboldened Russia, Kaine would try to poke him in the eye.

‘You guys love Russia,’ Kaine jumped in, talking over Pence. ‘You both have said Vladimir Putin is a better leader than the president,’ he charged.

Pence replied coolly, ‘I must have hit a nerve here.’ 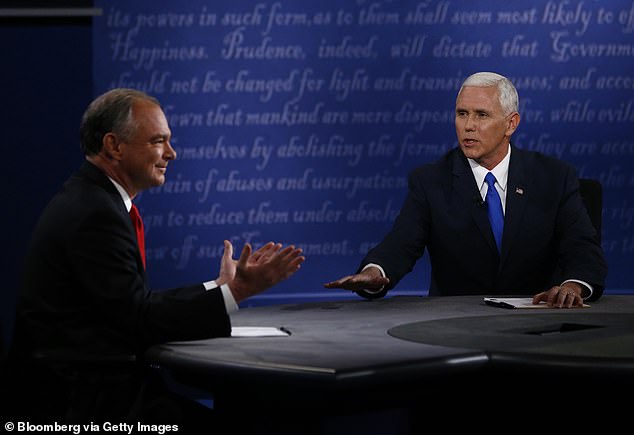 Four years ago, the Trump campaign was in similar peril when Pence (right) debated Democratic vice presidential nominee Tim Kaine (left). Pence was largely believed to have won that debate, at least stylistically

At another point, Kaine inartfully said to Pence, ‘You are Donald Trump’s apprentice.’

Pence had just tried to lay out an argument that Clinton was corrupt, suggesting she and former President Bill Clinton used the Clinton Foundation in a pay-to-play scheme while she was serving as secretary of state.

‘There’s a reason why people question the trustworthiness of Hillary Clinton,’ Pence said. ‘And that’s because they’re paying attention.’

While Pence held his own in 2016, debating Harris is considered a challenge after her career as a prosecutor and a member of the Judiciary Committee in the U.S. Senate.

That’s enabled Harris to create breakout moments, like she did during the Justice Brett Kavanaugh hearings in 2018.

‘Kamala Harris has been around the debate stage. She was in the U.S. Senate. They debate there all the time. Remember she was a prosecutor,’ Murtaugh said Tuesday on Fox News Channel. Brothers separated by divorce | The State