Parents have been warned about cannabis edibles designed to look like children’s sweets and are said to be 50 times stronger than a joint after 13 schoolgirls were rushed to hospital.

Detectives from the Metropolitan Police are trying to trace the source of the ‘sweets’ after the girls from La Sainte Union Catholic School in Highgate, Camden, were made unwell on Monday morning after ingesting them.

The Met confirmed the sweets contained high levels of THC – the active component in cannabis – and it is now understood the drug was designed to look like Nerds Rope sweets, which are available to buy online.

Parents have been warned about these ‘super potent’ edibles which supposedly contain 600mg of THC, the active ingredient in cannabis, after 13 schoolgirls were rushed to hospital on Monday having ingested some of the ‘sweets’ which are made to look appealing to children Are cannabis edibles legal to buy in the UK?

In the UK, cannabis is classified as a class B drug.

If you are caught consuming or in possession of cannabis, it’s just as serious as being caught with amphetamine and is punishable by up to five years in prison.

However, there are different parts of the cannabis plant which means some cannabis products are legal in the UK.

While marijuana – which can contain up to 30% THC – is strictly illegal, hemp can be grown under licence as it only contains less than 0.3% THC.

CBD (cannabidiol) oil is legal for use and sale in the UK without a prescription, as long as when it is sold to the public it is not sold as medicine and it does not contain more than 0.01% THC.

Cannabis oil, which is different to CBD oil because it contains THC – the compound that gives users a ‘high’ – is illegal under UK laws.

As the Nerds Rope Bites profess to have ‘super potent’ levels of THC in them, they would be considered illegal to buy and sell in the UK.

The medicated ‘Nerds Rope Bites’ come in brightly-coloured packaging that implies they are aimed at children but actually contains potent levels of THC.

The packet states they contain 600mg of the psychoactive chemical and have a ’60-minute activation time’.

An average joint is reported to contain about 12g of THC according to scientific studies.

It is part of an increasing trend as youths are buying some edibles with up to 600mg of cannabis off dealers online for as little as £42, according to one investigation.

They can be bought in different colours and drug potencies and are easy to mistake for normal Nerd Rope.

Some of the girls are thought to have spent the night at a hospital in Barnet, with the school asking parents to obtain a ‘written statement,’ on how the drug-laced sweets were brought into school.

The girls are thought to have headed back to class, where they reported feeling dizzy, while some vomited.

Pictures showed a row of ambulances and first responder vehicles parked outside the main building opposite Hampstead Heath.

One witness told MailOnline they saw ‘girls outside the ambulances crying and one throwing up’.

In a letter seen by the MailOnline, headteacher Sophie Fegan wrote: ‘We are working with the police to identify the origin of the ‘sweets’. 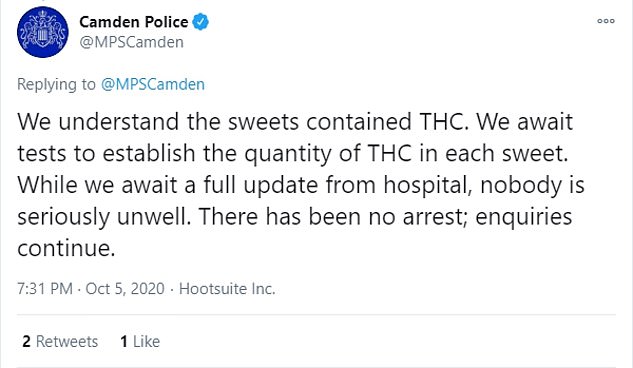 Cannabis infused sweets have become the latest craze among teenagers with authorities warning parents that they pose a serious danger because of their strength and if consumed to excess.

Known as ‘edibles’ they are freely available on the internet for around £20 for a packet of 30.

But street dealers are selling individual sweets for as little as £1 each, prompting a surge in popularity amongst school pupils, particularly in London and other urban areas.

The ‘edibles’ are attractively packaged in a way designed to appeal to young people while making it difficult to distinguish them from regular sweets.

One London schoolgirl told MailOnline: ‘All the kids are taking them, during school time and outside of it. They’re easy to get hold of and they’re very cheap, especially if you get them off the dealers. If you buy them on the internet, they’re delivered to your house.’

The ‘sweets’ come in a variety of different strengths of THC – the active component in cannabis, ranging from 75mg to a mind-bending 300mg, which can cause vomiting and other side effects.

Concerns have been raised however, that not all the packaging contains adequate information as to their strength and simply state ‘infused with cannabis.’

Some of the ‘sweets’ market themselves as a health treatment with one British website claiming: ‘Eating marijuana works better for LONG LASTING pain relief muscle spasms and similar conditions.’

Amongst the ‘edibles’ it lists are: Gummie Bears; Cherry Candy; Watermelon Rings and Peach Rings. THC laced fruit syrup is also available. All of it comes in stylised, colourful packaging.

While it is illegal to sell items containing THC in the UK for recreational purposes, it is legal for medical reasons, providing a dangerous loophole which many youngsters and dealers are exploiting.

They warned that the cartoon-covered Stoner Patch packets did not contain details about how strong the ‘sweets’ are and whether or not they are legal.

North Yorkshire PC Lauren Green said: ‘We want to make parents and carers aware that we have seen a rise in young people being in possession of drug-infused sweets known as ‘edibles’.

‘They can look very similar to well-known sweets such as Haribo, Smarties and chocolate bars. Edibles can be laced with illegal drugs such as cannabis and MDMA.

‘Unregulated sweets like these are dangerous as we don’t know what levels of drugs they contain.’

‘Once your daughter has recovered, I will need her to tell us how she came into possession of the ‘sweets’ and what she thought they were.

‘I am sure you will be asking her these questions too: it would be most helpful if you would ask your daughter to prepare a written statement for me.

‘We already know the name of the student who brought the sweets in, but we need to know more about how and why they were shared.’

The pupils were treated at the scene after suffering from a ‘sugar rush’ and taken to hospital but police said none were believed to be ‘seriously unwell’.

Yesterday, a parent told MailOnline it was suspected the girls had ingested THC-laced Gummi Bears.

Jan, who did not want to give her last name said: ‘We’ve heard that they ate too many of the Gummi Bears and then started feeling sick when they went into class.

‘The teacher became concerned because one of the girls vomited and the others felt as if they were about to.

‘We’re still waiting to hear the full story from the school but it’s very worrying that this kind of behaviour is taking place during school time.’

Meanwhile, Annie, another parent, said: ‘All the school is talking about these Gummi Bears but I’ve also heard that other kinds of cannabis sweets were eaten.

‘My daughter has told me that this is not the first time that girls have taken these sweets in school but nothing like this has ever happened before.

‘These sweets are very strong, and the girls ate about four or five each, which is way too much and can send you over the top.’

In August, a warning was issued to parents after North Yorkshire police raided properties in Harrogate and found large supplies of the edibles as well as weapons, drugs, money, phones and cash.

The move was part of Operation Needle, which is looking to smash dealers in the upmarket town half an hour north of Leeds.

Meanwhile, officers in Bradford confiscated a huge supply of Nerds sweets, which were also stuffed with cannabis.

And in July a teenager girl had to be taken to hospital in Castleford, near Wakefield, after she ate Nerds Rope infused with amphetamine.

It read: ‘We are relieved that the students who were hospitalised on Monday are now all fine – thank you to all who have been helpful and supportive.’

Shocked dad Nsimba, 55, whose daughter attends the school, said everyone had ‘panicked’ when the news broke yesterday morning.

Nsimba, a business student, told The Sun Online: ‘It’s very sad, and this incident worries me.

‘But now the students know that these things are not good for them. They have to avoid doing it.’

But Nsimba, from Democratic Republic of Congo, said he was happy with the school’s response adding: ‘It’s a very good school. They look after the children well. La Sainte Union School, pictured, has sent letters to parents asking for written statements from the students detailing how the THC-laced sweets made their way onto school grounds

‘Every time something happens, they communicate with the parents immediately.’ Coronavirus UK: Parents are kept away from seeing their seriously ill babies in intensive care