The African princess who was sold into slavery but became Queen Victoria’s goddaughter: New painting of Sarah Forbes Bonetta goes on display at late monarch’s home on the Isle of Wight

By Mario Ledwith for Daily Mail

She was an orphaned princess sold into slavery – but became Queen Victoria’s goddaughter.

The monarch paid for Sarah Forbes Bonetta’s education and was also godmother to her daughter.

Now a new portrait of Sarah, an accomplished musician and linguist, has been put on display at Victoria’s former home on the Isle of Wight – Osborne House. Sarah, the daughter of a West African king, lost her parents in a war in 1848.

A portrait of Sarah Forbes Bonetta now hangs at Osborne House, the former home of her godmother, Queen Victoria

Who was Sarah Forbes Bonetta?

Born to an African chief, at the age of five Sarah Forbes Bonetta’s parents were killed during a war and she was captured by King Gezo of Dahomy.

She remained in captivity, under the looming threat she could be used as a human sacrifice, until the age of seven, when British naval officer Captain Frederick Forbes arrived in modern-day Benin to put an end to slavery.

He received Sarah, then known as Aina, as a  ‘diplomatic gift’.

On her way back to Britain her name changed, taking the titles of the captain and his ship, the HMS Bonetta.

Queen Victoria met the orphaned princess at Windsor Castle, describing her as ‘sharp and intelligent,’ having paid for her education.

Thirty years after she was gifted to a British naval officer, Sarah died of tuberculosis in 1880, at the age of 37.

She was given to British naval officer Captain Frederick Forbes as a ‘diplomatic gift’ at the age of seven in 1850 after he travelled to the African kingdom of Dahomey – present-day Benin – to urge it to halt its slave trade.

Her original name, Aina, was changed on the way to England – she took the names of the captain and his ship, the HMS Bonetta.

Sarah was later brought to Windsor Castle and introduced to Victoria, who described her as ‘sharp and intelligent’ in her diary.

She arranged to have the little girl brought up as her protegee among the middle classes.

Sarah married African merchant James Pinson Labulo Davies in 1862 and named her first daughter after the Queen, but died of tuberculosis in 1880 aged 37.

The new portrait of Sarah in her wedding dress is on display at Osborne House, where Victoria used to meet her.

The picture was unveiled as English Heritage vowed to do more to highlight links between its properties and the slave trade.

It said it was commissioning portraits of other historical black figures associated with its sites ‘whose stories, like Bonetta’s, have been previously overlooked’.

The organisation said: ‘Black history is part of English history and, while we know we have more to do, English Heritage is committed to telling the story of England in full.’

It said it was carrying out ‘in-depth research’ into links between the slave trade and its sites, which will be published next year. Osborne House on the Isle of Wight was the seaside home of monarch Queen Victoria, who had described Sarah as ‘sharp and intelligent,’ in her private diary 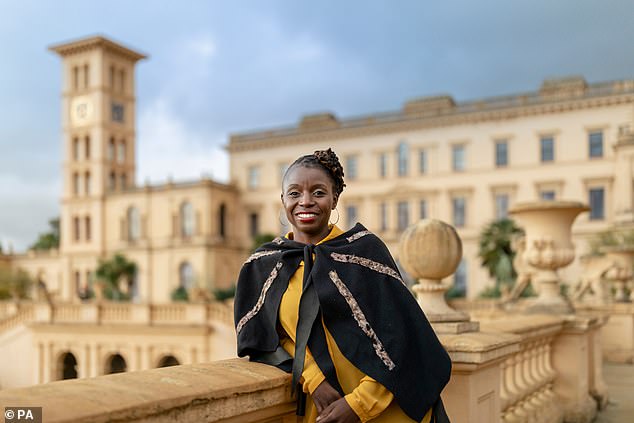 Artist Hannah Uzor has painted the new portrait from an old picture, she said the work ‘challenges assumptions,’ about black women in the 19th century Artist Hannah Uzor, who painted the new portrait, said it ‘challenges our assumptions about the status of black women in Victorian Britain’.

Meanwhile, a statue is to be erected of London’s first black mayor. John Archer was born in Liverpool in 1863 to a Barbadian ship steward and an Irish mother.

Donald Trump got no bounce from the Republican convention, new poll finds

He studied medicine and became a professional singer before being elected mayor of Battersea in 1913.

In the wake of the Black Lives Matter movement, the local council yesterday announced a £10,000 fund to pay for the statue.

A school named after Edward Colston has decided to change its name to remove any association with the slave trader.

Colston’s Girls’ School in Bristol said yesterday that it was beginning a ‘new chapter’ after three quarters of pupils and staff backed the move.

The school, which was set up in 1891 with a financial endowment from Colston, has already removed a statue of the 17th century industrialist following Black Lives Matter protests in June.

A decision on a new name will be made this month.

Meanwhile, the chairman of Historic England has warned that removing statues of figures linked to slavery will see history ‘slowly torn away, piece by piece’.

Sir Laurie Magnus told MPs on the Commons culture committee that it risked ‘tampering with the historical fabric’ of Britain.

Here’s how expanded newborn screening could save premature infants’ lives