The Lashkar-e-Toiba (LeT) terrorists behind Monday’s attack on a Central Reserve Police Force (CRPF) road-opening party in Jammu and Kashmir have been identified, a senior police officer said today. The terror attack in the Union Territory’s Nowgam area on the Jammu-Srinagar national highway on Monday had killed two CRPF personnel and injured three.

“We have identified the terrorists behind the attack. They are from the Lashkar, led by a Pakistani terrorist named Saifullah. We are on the job and they will be neutralised soon,” Inspector General of Police (IGP), Kashmir Zone Vijay Kumar said.

He was speaking to reporters after the wreath-laying ceremony of the two CRPF jawans, who were killed in the attack.

“Two terrorists came on a scooter, most probably from the Pampore side, and opened indiscriminate firing from an AK rifle,” the IGP said.

He admitted that the module of the Pakistan-based terror outfit had carried out an attack earlier in the Chadoora area of the Budgam district as well, in which an assistant sub-inspector of the CRPF was killed.

“We are conducting operations and soon, they will be neutralised,” the officer said.

Responding to a question on terrorists using two-wheelers to carry out the attacks, Vijay Kumar said it is easy for them to move around on motorbikes on roads where the vehicle movement is heavy.

“We cannot check every vehicle. Vehicles are checked based on information mostly. Checking every vehicle will cause traffic jams,” he said.

The IGP sought to assure people, saying there is no need to panic and “the situation is under control”.

On the use of virtual phone numbers by terrorists, he said this technology is a cause for concern but it has been used for subversive activities for years now.

“Virtual numbers have remained challenging since the beginning. It is challenging across the world. We are trying to find technological answers,” Mr Kumar said. 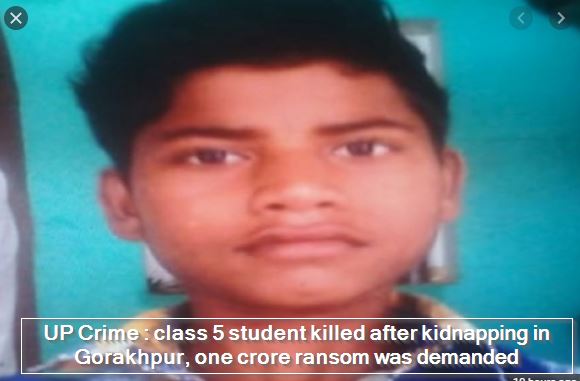 UP Crime : class 5 student killed after kidnapping in Gorakhpur, one crore ransom was demanded