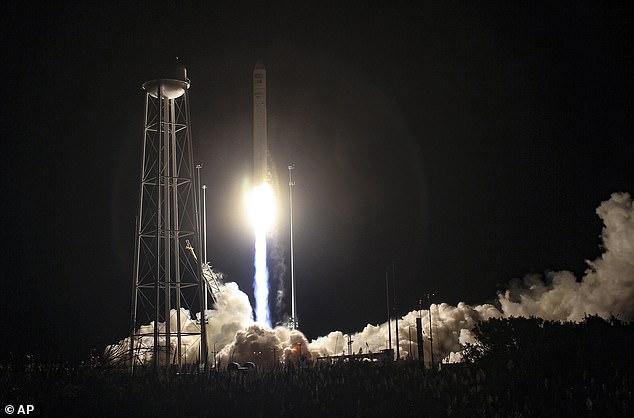 Astronauts aboard the International Space Station are in for a feast, as an 8,000-pound cargo ship is making its way bearing gourmet foods like Genoa salami, smoked Gouda and chocolate-covered cranberries.

North Grumman launched its capsule carrying the goods from the Virginia coast Friday, which arrived at the orbiting laboratory around 8am ET Monday.

The Cygnus capsule also  transported a highly publicized $23 million toilet, air tanks to address a persistent leak and bottles of Estée Lauder skin cream to be filmed for a social media campaign.

Along with the fancy meats and cheeses, the crew members received radish seeds that will be used to grow the plant on the ship.

Scroll down for videos

The SS Kalpana Chawla, named after the first Indian woman in space, launched from the Virginia coast Friday night. The four-ton cargo capsule was originally scheduled for earlier in the week but was delayed by poor weather and technical issues

The takeoff was visible in clear skies from the Carolinas to New England.

‘It was a spectacular launch,’ said NASA’s deputy space station program manager Kenny Todd in a statement. ‘Creating the artificial dawn for a few minutes there, it’s just gorgeous.’

The SS Kalpana Chawla capsule was named after the first Indian woman in space, launched from Virginia’s Wallops Island Friday night, atop an Antares rocket.

Chawla was among the seven astronauts killed in the 2003 shuttle Columbia accident. The Cygnus capsule successfully reached the ISS on Monday morning. Along with experiments and equipment, it brought gourmet treats like smoked Gouda and chocolate-covered cranberries and bottles of Estée Lauder skin cream

Some of the comestibles were specifically requested by Expedition 64 crew members Sergey Ryzhikov, Kathleen Rubins, Sergey Kud-Sverchkov, Michael S. Hopkins,  Victor J. Glover, Soichi Noguchi and Shannon Walker, who are due on the station November 1.

Radish seeds were also included, with the hopes that the crew could grow and harvest 40 radishes within a month. Northrup Grumman’s Antares rocket before liftoff from NASA’s test flight facility on Wallops Island, Virginia. In addition to special food for the astronauts, the payload included radish seeds that will be planted and cultivated on the ISS

Growing radishes in space is ‘a transition from basic plant biology in space to a production system’ that may help explorers on the moon and Mars, said biologist Karl Hasenstein of the University of Louisiana at Lafayette.

Should they successfully cultivate the root vegetables, peppers and tomatoes could follow in a few years.

The new toilet will be tested at the orbiting outpost before accompanying astronauts to the moon in a few years.

Assuming astronauts are happy with its performance, a version could be installed in the Orion spaceship taking the first woman to the Moon in 2024. Dubbed the Universal Waste Management System, the low-gravity commode has better accommodates the female anatomy. Assuming astronauts are happy with its performance, a version could be installed in the Orion spaceship taking the first woman to the Moon in 2024. A chart showcasing the new design, with a seat better suited for women and a more female-friendly urinal suction system

The capsule was originally scheduled to launch earlier in the week but was delayed by poor weather and software issues until Friday.

It also ferried research experiments on cancer drugs and a VR camera that can take cinematic shots of spacewalks.

In addition to the expected experiments and equipment, capsules sent to the ISS often include care packages and fresh food to help liven up astronauts’ diet.

This isn’t the first gourmet delivery for the orbital outpost: In February, NASA sent a 8,000-pound shipment to the ISS with cheese, fruit and candy to satisfy the cravings of three astronauts.

The bounty aboard the SS Robert H. Lawrence included cheddar and manchego cheeses, fresh fruit and vegetables, chocolate and three kinds of candy – Skittles, Hot Tamales, and Mike and Ike’s.

The International Space Station (ISS) is a $100 billion (£80 billion) science and engineering laboratory that orbits 250 miles (400 km) above Earth.

It has been permanently staffed by rotating crews of astronauts and cosmonauts since November 2000.

Research conducted aboard the ISS often requires one or more of the unusual conditions present in low Earth orbit, such as low-gravity or oxygen.

The US space agency, Nasa, spends about $3 billion (£2.4 billion) a year on the space station program, a level of funding that is endorsed by the Trump administration and Congress.

A U.S. House of Representatives committee that oversees Nasa has begun looking at whether to extend the program beyond 2024.

Alternatively the money could be used to speed up planned human space initiatives to the moon and Mars. 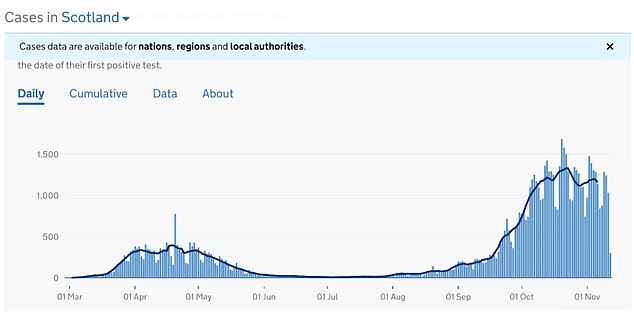 Are these the UK’s naughtiest dogs?