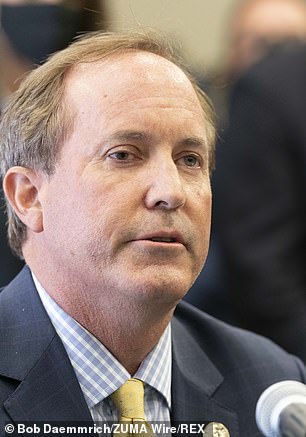 Texas Attorney General Ken Paxton has been accused of helping real estate investor and campaign donor Nate Paul after his offices were last year raided by the FBI.

Paxton  – who is leading the attorneys general antitrust probe into Google –  is said to have given legal favors to the Austin based businessman who donated $25,000 to his 2018 re election bid.

In a single-page letter several of the Republican’s top deputies wrote that they reported him to ‘the appropriate law enforcement authority’ for potentially breaking the law ‘in his official capacity as the current Attorney General of Texas.’

He wrote: ‘Each of the individuals in this text chain made a good faith report of violations by you to an appropriate law enforcement authority concerning your relationship and activities with Nate Paul.’

Paxton replied he was out of office and asked them to email their concerns. 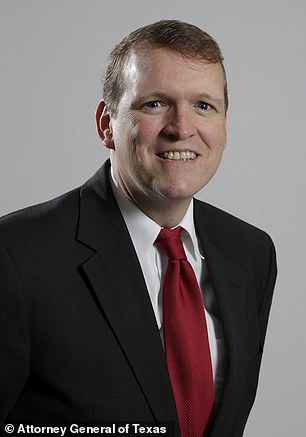 Texas Attorney General Ken Paxton, left, has been accused of helping real estate investor and campaign donor Nate Paul after his offices were last year raided by the FBI. The letter was signed by the deputy attorneys general for policy, administration, civil litigation, criminal investigations and legal counsel, as well as Paxton’s first assistant, Jeff Mateer, right, and Mateer’s deputy The Thursday letter had stated: ‘We have a good faith belief that the attorney general is violating federal and/or state law including prohibitions related to improper influence, abuse of office, bribery and other potential criminal offenses.’

It was first reported jointly by the Austin American-Statesman and KVUE-TV and subsequently obtained by The Associated Press.

The letter does not offer specifics but it has since emerged that the Houston lawyer Paxton appointed over the Paul investigation last week issued grand jury subpoenas targeting ‘adversaries’ of the real estate mogul, according to reports. Several top deputies of Texas’ attorney general have reported to law enforcement that their boss engaged in crimes including bribery and abuse of office, according to this internal letter Paxton – who is leading the attorneys general antitrust probe into Google – is said to have given legal favors to Nate Paul, pictured, who donated $25,000 to his 2018 re election bid

Paxton said Sunday: ‘The Texas attorney general’s office was referred a case from Travis County regarding allegations of crimes relating to the FBI, other government agencies and individuals. My obligation as attorney general is to conduct an investigation upon such referral.

‘Because employees from my office impeded the investigation and because I knew Nate Paul, I ultimately decided to hire an outside independent prosecutor to make his own independent determination. Despite the effort by rogue employees and their false allegations, the AG’s office will continue to seek justice in Texas.’

Paul has not commented on the claims.

For over a year, the Justice Department and the Federal Trade Commission have pursued sweeping antitrust investigations of big tech companies, looking at whether Google, Facebook, Amazon and Apple have hurt competition, stifled innovation or otherwise harmed consumers.

A bipartisan coalition of 50 U.S. states and territories, led by Paxton, announced a year ago on the steps of the Supreme Court that they were investigating Google’s business practices. They cited ‘potential monopolistic behavior.’

The group is expected to launch an antitrust lawsuit against the internet search engine as soon as this week, Politico reported Friday. The letter could deepen legal trouble for Paxton, who has spent nearly his entire five years in office under felony indictment for securities fraud, although the case has stalled for years over legal challenges.

Paxton pleaded not guilty in that case, and it is not clear whether the new accusations are related. Philip Hilder, the attorney general’s defense lawyer, declined to comment Sunday.

‘We’re going to look into these allegations,’ Brian Wice, one of the special prosecutor on the securities case, said of the new claims of wrongdoing by Paxton. He declined to elaborate.

In a statement to the American-Statesman Paxton’s office said: ‘The complaint filed against Attorney General Paxton was done to impede an ongoing investigation into criminal wrongdoing by public officials including employees of this office. Making false claims is a very serious matter and we plan to investigate this to the fullest extent of the law.’

‘These allegations raise serious concerns,’ Gov. Greg Abbott, also a Republican, said in a Sunday statement. He declined to comment further ‘until the results of any investigation are complete.’

‘Indicted Texas Republican Attorney General Ken Paxton is the top law enforcement official in the state,’ Texas Democratic Party Chairman Gilberto Hinojosa said in a statement. ‘Yet, he has proven for years that he cannot follow the law himself.’

The letter was signed by the deputy attorneys general for policy, administration, civil litigation, criminal investigations and legal counsel, as well as Paxton’s first assistant, Jeff Mateer, and Mateer’s deputy. None of them responded to messages seeking comment Saturday or Sunday.

Mateer resigned from Paxton’s office Friday to rejoin a prominent conservative nonprofit law firm in the Dallas-area, according to the Dallas Morning News. The First Liberty Institute did not immediately respond to an inquiry about him Sunday. 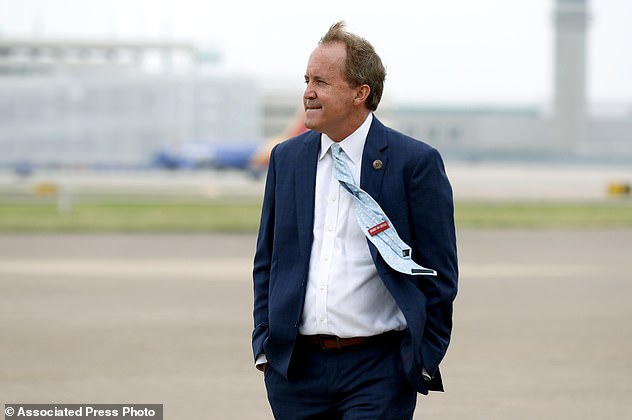 State Attorney General Ken Paxton, pictured in June. Several top deputies of Texas’ attorney general have accused him of crimes including bribery and abuse of office in an internal letter saying they’ve reported the actions to law enforcement

Paxton, who is in his second term, has raised his national profile as a conservative crusader under President Donald Trump— including leading Lawyers for Trump, a group supporting the president’s reelection.

He also spearheaded a lawsuit against the Affordable Care Act that goes before the U.S. Supreme Court this fall and was previously chairman of the Republican Attorneys General Association. A spokeswoman for the association declined to comment.

Michelle Lee, a spokeswoman for the FBI’s San Antonio office, said it’s agency policy not to comment on whether it has received allegations of crimes or is investigating. A spokesman for the U.S. Attorneys Office for the Western District of Texas declined to comment.

Bill Miller, a veteran Texas political consultant who’s worked for Republicans and Democrats, said he couldn’t think of any precedent for a current elected leader’s staff accusing them of crimes.