Drunken EDL thug, 39, who launched bottle at police during Black Lives Matter counter-protest in Parliament Square is jailed for a year

By Danyal Hussain For Mailonline

A drunken EDL thug who threw a bottle at police and told officers they had failed their country at a Black Lives Matter counter protest has been jailed for 12 months.

Bricklayer Steven Pantony, 39, repeatedly kicked a barrier and yelled drunken abuse during the far-right riot in Parliament Square on June 13.

BLM had cancelled their planned demo earlier in the day but counter protesters still gathered to ‘protect’ central London’s statues.

After seeing images of himself circulating online single father-of-two Pantony handed himself in to police.

Pantony, from Rainham, Kent, claimed he had no recollection of the day because he was so drunk but admitted violent disorder at Southwark Crown Court. He was sentenced to 12 months imprisonment.

He has 17 previous convictions for 22 offences including violent disorder, assault occasioning actual bodily harm and battery.

Steven Pantony, 39, threw a bottle at police and told officers they had failed their country at a Black Lives Matter counter protest ‘Statue defenders’ stand near the Cenotaph on June 13, before later clashing with BLM protesters. Pantony was part of the group

Nathan Rasiah, prosecuting, said: ‘In short the defendant was part of a crowd that seemed to be shouting and acting aggressively towards police.

‘He was seen to throw bottle in the direction police officers and kicked a barrier that was in place to control the demonstration and to throw a container of drink out of the crowd of people.

‘His image was circulated and he presented himself at a police station.

‘He said that he was very drunk at the time.’

A police video of the ‘protect our statues’ protestors confronting officers was played to the court, with Pantony’s image circled and highlighted.

Judge David Tomlinson said: ‘This was a very bad case of violent disorder.

‘You were hostile to officers as a whole and the task and duty that the police had to undertake that day was one of exceptional difficulty.’

The judge expressed concern that only four people have been arrested in relation to the disorder that day, all of whom await trial apart from Pantony.

‘He handed himself in, I’m very close to saying that, but for that fact, he would not be here,’ said Judge Tomlinson.

‘The reality is that none of those people have been identified or charged and there isn’t any likelihood that they will be. Pantony, from Rainham, Kent, claimed he had no recollection of the day because he was so drunk but admitted violent disorder at Southwark Crown Court ‘There were a lot of troublemakers milling around after that incident in Minneapolis. I will say nothing about that.

‘In the aftermath there was a lot of violent disorder in North America and here and it may well be that some people went to Parliament Square on the 13th of June because they had a serious concern that the monuments were not going to be protected by the police.

‘Sadly then some people’s behaviour was disgraceful, what we have just witnessed was violent behaviour.

‘To qualify violent disorder you need a number of other participants, minimum three, to qualify as a riot you need a lot more.

‘I said at the outset that one of the reasons why I had decided not to sentence was in expectation that other offenders would have identified and that appears not to have happened.’

Judge Tomlinson said he would have to offer a discount to Pantony’s sentence because ‘other people will think ”Oh well I’ll just let the old bill come and get me”.

Dennie Rochelle, defending, said Pantony’s alcohol issues had never been addressed by the courts before.

‘It seems that drink has taken over every element of his life,’ she said.

She said Pantony had tried to take his own life while grieving his late father. 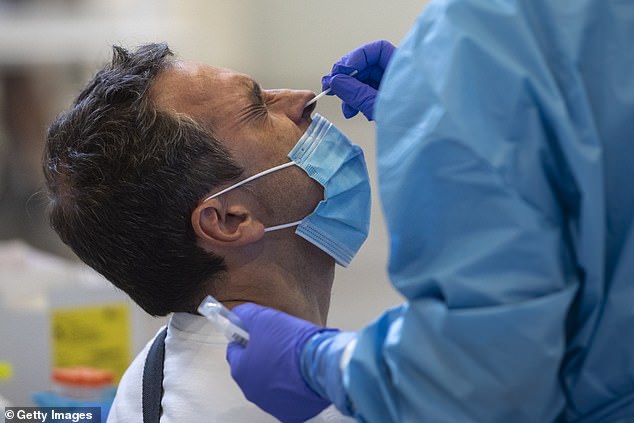 The true risk of Covid-19? Not much more than taking a regular bath, writes TIM HARFORD Children ‘slept next to blackened corpses of their poisoned parents’