Demi Lovato is ‘happy to have ended her engagement’ to Max Ehrich & just wants to ‘move on’ a second source spills to HollywoodLife EXCLUSIVELY.

Demi Lovato, 28, isn’t thrilled with ex-fiancé Max Ehrich‘s reaction to their split — particularly his on-going outbursts on social media. “She is really disappointed that it has gotten to this point with Max. Breakups are never something anyone wants to deal with, and the way Max is reacting and the fallout of it all is heartbreaking,” an insider close to the Disney alum spills to HollywoodLife EXCLUSIVELY. “They had something and Demi was really happy and then she learned more about him and the magic they had soured very quickly,” they added.

The Tell Me You Love Me songstress announced her whirlwind engagement to 29-year-old Max, who stars on CBS daytime soap The Young & The Restless, back in July after just four months of dating. Demi took to Instagram to confirm the news and show off her stunning engagement ring, which was estimated to cost over $2 million! The couple went into quarantine together in March and appeared to be more in love than ever until their split in September. Since, Max has taken to social media to express his frustrations in a series of bizarre videos and posts — while Demi has poured her pain into song “Still Have Me” which dropped on Sept. 30.

“Sure, [the break-up] has led to a song, but it has led to something more and that is hurt feelings all around,” the insider added. “She hopes all this will pass soon and she can focus on everything else that is happening in her life. She doesn’t want heartbreak; she wants to be in a great situation in her life and getting over this relationship will be a good start. Hopefully for Demi, Max stops talking about it,” they also spilled to HL.

A second insider close to the situation also revealed Demi’s feelings about Max’s social media posts — which included the soap star claiming be found out about their split from a tabloid while he was shooting a movie in Atlanta, GA. Despite his actions, the Sonny With A Chance actress doesn’t want fans causing more drama. “Demi is happy to have ended her engagement, but despite Max lashing out at her she doesn’t want her fans coming after him online. Demi has a heart of gold and she isn’t one who goes tit for tat,” the source told us.

They also said that Demi is keen to move on following this chapter in her life. “After everything that’s happened, she still wishes him nothing but the best. But she just wants to move on and would like for Max to do the same,” the insider said. “Demi would like for him to please stop involving other people who have nothing to do with what went on in their relationship and to understand that sometimes things don’t work out. She is doing her best to focus on moving on and feels grateful she has an amazing support system around her of friends and family,” they concluded. 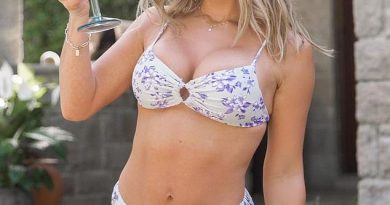