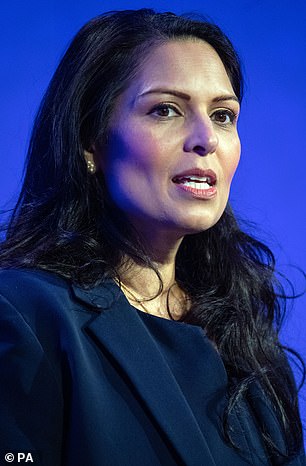 Only one in 70 migrants who crossed the Channel since April have been deported, Home Office figures reveal as Priti Patel vows to fix ‘broken’ asylum system

By Katie Weston For Mailonline

Home Secretary Priti Patel, pictured, plans to set out the new legislation at the Conservative Party conference this weekend

Only one in 70 migrants who crossed the Channel since April have been deported, Home Office figures have revealed as Priti Patel vows to fix the ‘broken’ asylum system.

The Home Secretary plans to make the announcement at the Conservative Party conference, starting today as a virtual event.

She is understood to be setting out a ‘fair border bill’, which will make people put forward all their reasons for refugee status at the start of their asylum application in the hope of deterring them from extending the process, and will come into place after the Brexit transition period.

It follows the Home Office revealing that only 76 of the 5,330 migrants who made the crossing in the last five months have been deported from Britain.

Speaking on the plans, Foreign Secretary Dominic Raab told The Times: ‘Of course we scope a whole range of things, including how we use our international partners or otherwise to deal with that.

‘That happens all the time. We won’t be doing our job if we didn’t know all options whether it’s to rule them in or out.’

He suggested Ms Patel would present changes to the law, adding that the cabinet will stay united in stopping abuse while sticking to the UK’s ‘best traditions of being a haven for those who flee persecution’.

The past week has seen several reports emerge describing extraordinary measures being mooted by the Home Office to get to grips with migration.

One claimed that Ms Patel had instructed her department to weigh up the logistics of shipping migrants to islands and far-flung overseas territories for processing, including Ascension Island, 4,000 miles away in the south Atlantic.

Others revealed proposals for a wave machine in the Channel to push back boats trying to make the crossing, and a plan to house those who do reach British waters on disused ferries. A group of people thought to be migrants are brought into Dover, Kent, by Border Force on Tuesday following a small boat incident in the English Channel A further 13 migrants arrived in Dover by dinghy on Tuesday after crossing the Channel in the dark on Monday night. Around 40 people are understood to have been detained

The briefings have infuriated the upper echelons of the Home Office, with Permanent Secretary Matthew Rycroft confirming an inquiry into the leaks.

Nicola Sturgeon waded into the row yesterday, saying: ‘They can rest assured that any proposal to treat human beings like cattle in a holding pen will be met with the strongest possible opposition from me.’

Shadow home secretary Nick Thomas-Symonds added: ‘The Tories are lurching from one inhumane and impractical idea to another.

‘The idea of sending people to Ascension Island, creating waves in the English Channel to wash boats back and buying ferries and oil rigs to process asylum claims shows the Government has lost control and all sense of compassion.’ It came as a plane chartered by the Home Office flew a single Channel migrant out of the country earlier this week – after last-minute legal challenges blocked 29 other removals.

Dozens of migrants made it across the Channel in small boats on Tuesday for the first time in a week, with around 40 people understood to have been detained.

One boat with 13 people – 11 men and two teenage boys – landed on Shakespeare’s Beach at Dover in Kent with a second thought to have landed further down the coast at Kingsdown near Deal.

The latest migrant crossing came as it was revealed that asylum seekers who are being housed in an army barracks in Kent are being crammed into rooms of 20 people.

Refugees who are staying at the Napier Barracks in Folkestone, Kent, said that 20 people are being forced to share two toilets and two showers between them, amid the coronavirus pandemic.

Friends of Priti Patel reacted with fury on Thursday over leaks claiming she was pushing ideas including processing asylum seekers thousands of miles from Britain.

Reports have suggested the Home Secretary was looking at ‘offshoring’ refugees arriving in Britain in places including Ascension island and St Helena in the south Atlantic, Moldova in eastern Europe, Morocco and even Papua New Guinea.

Leaks now being investigated also suggested the Home Office had considered putting wave machines and a floating ‘wall’ in the Channel to stop migrant crossings in small boats and planned to house them on retired ferries.

Although the France-facing wave machine idea has been dismissed, the department has consulted maritime industries on the plausibility of a floating barrage between England and the continent, the Financial Times reported. The idea of using ferries to house refugees is also being considered.

But Ms Patel has been left furious at slew of negative briefing about the plans to crack down on abuses, on the day the number of migrants entering the UK in 2020 reached 7,000.

There are also claims that Boris Johnson’s top aides, including Dominic Cummings, are the targets of the briefing rather than Ms Patel, as Downing Street has been pushing heavily for the ‘offshoring’ policy.

Allies of the Home Secretary said she did not believe the negative briefing was coming from her department and sighted their guns on other parts of Government.

‘People are having a bit of a free for all,’ one said. ‘There is a lot of briefing from the Cabinet Office. They have a task force (on offshoring) there.

They pointed out that much of the material was ‘damaging to No10’. ‘There are people who have spent the last three weeks going after the PM and now are going after his advisers.’ CHRISTOPHER BIGGINS: Mayor, your cycle lanes are killing my London