The Department of Agriculture is including a letter signed by President Donald Trump in boxes of surplus food that are being sent out to needy American families.

The letters – both in English and Spanish – were obtained by Politico, with representatives from the organizations tasked with handing out the food complaining to the news site that the letters are being used to bolster Trump’s re-election effort.

‘In my 30 years of doing this work, I’ve never seen something this egregious,’ Lisa Hamler-Fugitt, the executive director of the Ohio Association of Food Banks told Politico. ‘These are federally purchased boxes.’

The Farmers to Families Food Boxes, seen behind President Donald Trump on an August 24 trip to Mills River, North Carolina, now contain letters signed by him The president is captured holding what looks to be the controversial letter during his tour of Flavor First Growers and Packers in Mills River, North Carolina in late August

These letters are reminiscent of the Trump-signed $1,200 stimulus checks that started going out to American families in April.

That move was also controversial because the stimulus, like the food boxes, was taxpayer-funded.

More recently, The New York Times reported that the president only paid $750 in federal income taxes in 2017, his first year in office.

Trump wrote in the letters, ‘safeguarding the health and well-being of our citizens is one of my highest priorities.’

‘As part of our response to coronavirus, I prioritized sending nutritious food from our farmers to families in need throughout America,’ the letter ssaid.

The president then boasted that 50 million Farmers to Families Food Boxes have been sent out.

‘And we will continue to serve those most in need during this challenging time,’ Trump wrote.

The USDA told Politico in a statement, ‘Politics has played zero role in the Farmers to Families food box program.’

‘It is purely about helping farmers and distributors get food to Americans in need during this unprecedented time,’ the Agriculture Department said.

While Ivanka Trump has been the face of the program, the president accompanied her on a trip to Flavor First Growers and Packers in August during the week of the Republican National Convention.

Trump had just won his party’s nomination in Charlotte, North Carolina before making an afternoon stop in Mills River, a small town near Hendersonville and Asheville.

The president didn’t keep politics off the table then.

Before he started talking about the food boxes, Trump laid into his Democratic rival Joe Biden for not traveling to Milwaukee for the Democratic National Convention.

‘And, you know, Joe Biden was supposed to be in Wisconsin, but he never showed up,’ Trump said. ‘I showed up. … I was there. It was a great, exciting moment actually,’ he said of winning the nomination earlier that day in Charlotte. 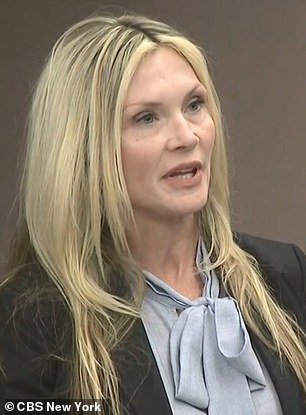 Actress Amy Locane is sent back to prison for eight years for killing a woman, 60, in 2010 DUI crash