Protesters and activists from both sides of the political spectrum have staged demonstrations in Cleveland in the lead up to the first presidential debate.

President Donald Trump and his Democratic rival Joe Biden will face off on Tuesday night for the first time this election year at Case Western Reserve University.

In the lead up to the highly-anticipated clash, the city of Cleveland has not only been preparing to host the two candidates, but has been bracing for potential unrest and riots outside of the debate venue.

City officials set up barriers and called in the National Guard in anticipation of several planned protests.

Hours before the event, hundreds of of demonstrators swarmed the area where police officers were on hand in case things got out of line. Black Lives Matter supporters were out in force at Wade Park, near Case Western Reserve University, where Trump and Biden will go head to head The demonstrations drew activists from both sides of the political spectrum. A man holds a ‘not my cheeto’ sign, in reference to the president, on Tuesday The signs held by participants were varied: Black Lives Matter, the more than 200,000 deaths from COVID in the United States, and for the late Supreme Court Justice Ruth Bader Ginsburg.

In nearby Wade Oval park, protesters were seen holding baby Trump balloons and placards with messages taking aim at the president and his administration.

Several protests were planned ahead of the debate, including one in support for ‘Black Lives and Climate Justice’, according to a Facebook event.

Another, hosted by anti-abortion organization ‘Created Equal’ planned to stage a demonstration outside the university’s Health Education Campus.

‘This election is pivotal. If abortion advocates take over, America is doomed. A nation who kills its children has no future both figuratively and in real life,’ the Facebook event states. A demonstrator wearing a mask of former U.S. Secretary of State Hillary Clinton sits outside the first presidential debate On Monday, businesses began taking steps to protect their properties in the event protests and counterprotests spiraled out of control.

‘This is some concern based on all of the folks with all of the different ideologies that will be coming to town, and if they will direct that energy toward themselves and / or if they will do toward personal property,’ city councilman Blaine Griffin told Fox News.

‘We support anybody’s right to protest and do what they need to do but we just don’t want any harm to personal property,’ he added.

The protests remained largely peaceful as of 8pm on Tuesday.

The 90-minute debate will be divided into six segments, selected by Fox News’ Chris Wallace, who is moderating. Police line up in front of the debate hall in Cleveland Protesters rally against President Trump at the debate Protesters hold a ‘Make Handmaids Fiction Again’ sign, likely in reference to Amy Comey Barrett’s Supreme Court nomination, as some critics have compared her views to those held by oppressors in the fictional novel ‘The Handmaid’s Tale’

They include: the pandemic, the economy, the Supreme Court, election integrity, the candidates’ records, and ‘race and violence in our cities.’

The candidates will not shake hands when they take the stage at 9 pm ET on Tuesday night because of the coronavirus pandemic. Instead they will stand at podiums that are socially distanced from one another while Wallace sits at a desk in front of them.

There will be no opening statements and the first question will go to Trump.

Earlier on Tuesday, Trump arrived in Cleveland aboard Air Force One and finished a 20-minute preview visit to the debate venue shortly before Biden landed in the city at about 5pm. 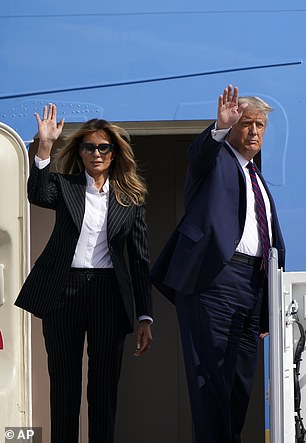 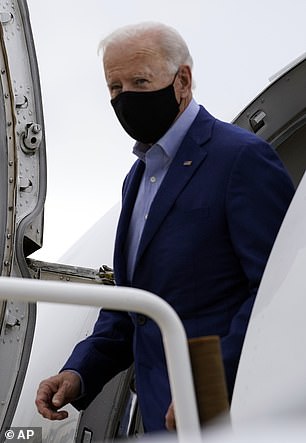 President Donald Trump and first lady Melania Trump wave before boarding Air Force One to travel to Cleveland. Democratic rival Joe Biden touched down in the city shortly after at 5pm Biden went directly to the debate pavilion for his own walk-through.

It has been generations since two candidates asked to lead a nation facing such tumult, with Americans both fearful and impatient about the coronavirus pandemic that has killed more than 200,000 of their fellow citizens and cost millions of jobs.

With just 35 days until the election, and early voting already underway in some states, Biden steps onto the stage holding leads in the polls – significant in national surveys, close in some battleground states – and looking to expand his support among suburban voters, women and seniors.

Surveys show the president has lost significant ground among those groups since 2016, but Biden faces his own questions encouraged by Trump’s withering attacks. José Luis Rodriguez, ‘El Puma’, gets the vaccine against COVID-19 and defends it | The State Disneyland cancels the sale of annual passes | The State