Gulf News at 42: When the wide-eyed trainee got a reality check

The family of a black man who was fatally shot seven times by a Maryland police officer while handcuffed in a patrol car earlier this year has reached a $20million legal settlement in his death.

On Sunday the Office of the County Executive in Prince George’s County announced that a settlement has been reached.

On Monday County Executive Angela Alsobrooks was joined by Green’s family attorney Billy Murphy and members of his family to announce the settlement.

‘Be clear there is no price that you can put on the life of a father, a son, a brother, an uncle. There is no appropriate price tag to accompany a loss like that one. But we believe the actions taken that night and ultimately taken againt his family warrant that settlement,’ Alsobrooks said.

The agreement is believed to be one of the nation’s largest one-time settlements involving a police killing. 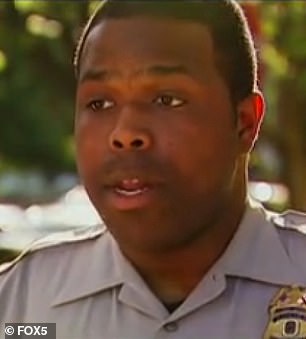 According to the police report from the incident, Owen and another officer responded to a traffic accident where Green was accused of striking multiple vehicles.

Owen and another officer found Green parked nearby and reported that Green was possibly under the influence of drugs.

Owen handcuffed Green and placed him in his patrol car.

Witnesses reported a struggle inside the police cruiser, however investigators didn’t find evidence of a fight, and Green was later shot in the front passenger seat.

In a news release officials said ‘Green was shot seven times by the officer’s duty weapon’ as they awaited the arrival of a drug recognition expert.

Fox5 reported Green was in police custody for at least 20 minutes before he was shot to death. 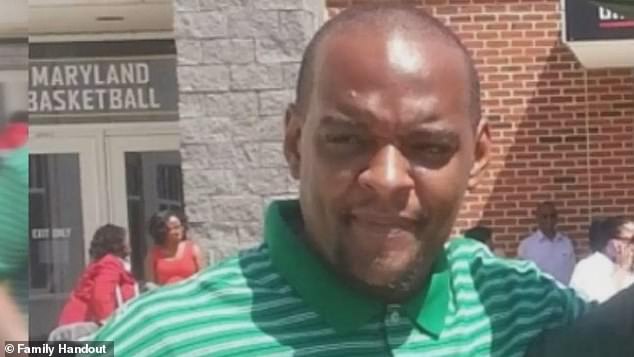 According to the police report Owen and another officer responded to a traffic accident where Green was accused of striking multiple vehicles. He was handcuffed, placed in a patrol vehicle, and within 20 minutes in police custody shot to death The shooting was not caught on body camera because Owen had not been assigned one, the chief said.

Owen was arrested the same day as the shooting. He was charged with second-degree murder, voluntary and involuntary manslaughter, first-degree assault and use of a firearm in the commission of a crime of violence, as per the Baltimore Sun.

Both Owen and Green are black. The police department initially refused to share Green’s race. 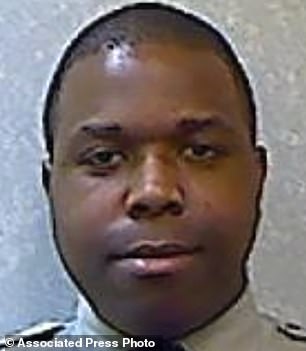 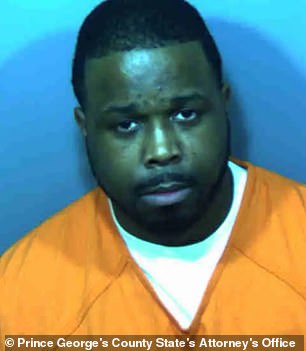 Cpl Michael Owen, Jr., had been a 10-year-veteran with the force prior to the shooting. Pictured right in January mugshot

Owen was denied bond in January by a judge who said he found evidence that the officer posed a danger to the community.

Defense attorney Jonathan Scruggs said in January that Owen is an ordained minister and doesn’t pose a danger.

Owen has been involved in at least two other shootings during his time on the force.

In 2011, he fatally shot a man who pointed a gun at him after Owen left an event at police headquarters, the department said. Owen was placed on administrative leave after that incident, but there is no indication whether additional action was taken.

In 2009, Owen was off-duty when someone tried to rob him outside his home, The Washington Post reported. Police officials said the would-be robber fired, but Owen was not hit and returned fire. The assailant fled, according to police.

The state’s attorney’s office confirmed to The Associated Press that jury selection in the case was scheduled to begin in March 2021.

Manual handbrakes are being replaced by electronic parking systems in cars

Gulf News at 42: When the wide-eyed trainee got a reality check