Home » UK » Birmingham » A QUARTER of panic-bought food ends up in the BIN: Hoarders warned stockpiling is a ‘false economy’

One in four items bought by hoarders goes to waste as shoppers are warned stockpiling is a ‘false economy’ a study has revealed.

The study, carried out by Topcashback, found that Britons spent nearly £10 billion a year on stockpiling items that are lost, forgotten or thrown away, causing unnecessary food waste and greenhouse gas emissions.

With one in four bulk buys going to waste, the report reveals that shoppers are continuing to subscribe to what the cashback shopping site describes as ‘a false economy’.

The study shows that 80 per cent of shoppers identified ‘saving money’ as the number one reason to bulk buy.

Conversely, almost a quarter also said they regretted stocking up at one point or another – with nearly half citing being worse off financially as the reason.

It comes as panic buying across the UK has resumed amid fears of a second wave of coronavirus and another lockdown with shoppers reporting queuing for 20 minutes to enter shops before similar further delays at checkouts.

And online customers found it near-impossible to get delivery slots from Asda, Morrisons, Ocado, Sainsbury’s and Tesco – some didn’t have free slots for up to two weeks.

An empty space where toilet rolls would normally sit at the Tesco in Slough, Berkshire 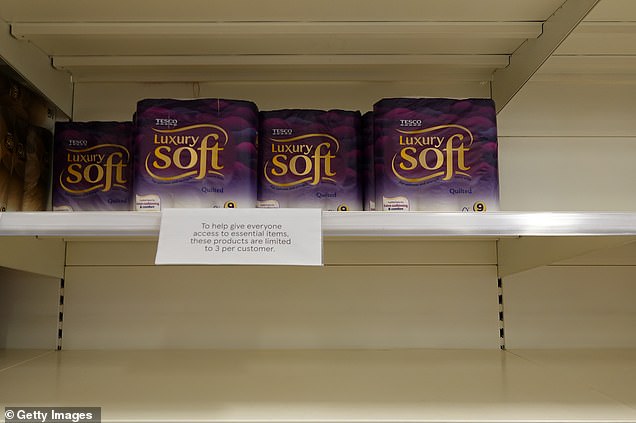 However, shops have insisted that bare shelves would be quickly restocked. Pictured: A sign limiting three items per customer is displayed in a supermarket in Manchester The toilet roll running out at Tesco in Ely, Cambridgeshire, on Thursday afternoon as the store ration it to one pack per customer after customers have started panic buying items again An empty space where tins of beans would normally sit at the Tesco in Slough, Berkshire

Restrictions on items which vanished most quickly during the country’s first lockdown, such as flour and eggs, have been put in place.

However, shops have insisted that bare shelves once filled with toilet paper and pasta will be quickly restocked.

The research showed that a quarter of purchases are wasted, predominantly because the product is not used before its use-by date.

The study estimates that the average shopper spends £200 a year on bulk buys that they do not use and ends up being thrown away – this works out at about £9.6 billion annually across the country.

The most popular items that were bought in bulk were tinned items, toilet roll, pasta, rice, frozen food and soap.

Adam Bullock, from Topcashback.co.uk, said: ‘Shoppers believe they are helping the environment by bulk buying.

‘However, by continually throwing away a percentage of their purchases, they are making a negative impact, and are harming their wallet at the same time.

‘Being savvy with savings doesn’t necessarily require stocking up in bulk.’

**Been affected by panic buying? Get in touch at [email protected]**

Supermarket bosses have been forced to implement restrictions on essentials as shoppers continue to try and stockpile amid fears of a second lockdown.

The executive director of Waitrose, James Bailey, told The Sunday Times that there was ‘enough food to go round’.

He added: ‘But if one person fills their house will all the packs of pasta they can get their hands on, it inevitably means somebody else will go without. They could be the most vulnerable or key workers.’

It comes after Tesco became the latest supermarket to impose rationing on food and household goods.

In a bid to avoid the bulk buying which left shop shelves across the UK almost bare in March, the supermarket giant will limit items such as flour, dried pasta, toilet roll and anti-bacterial wipes to three per customer.

Morrisons on Thursday announced rationing would be introduced on certain items in its stores up and down the country.

Charities for the elderly are also asking customers to be ‘mindful’ about the impact of panic buying on the more vulnerable in society.

Caroline Abrahams, Charity Director at Age UK, said: ‘Earlier this year we heard repeatedly from older people and families deeply distressed about the difficulties they had getting hold of groceries and essential supplies.

‘Support with shopping has remained in high demand from local Age UKs for those who have found it hard to navigate socially distanced shops, are not online or are understandably anxious about going out.

‘No doubt many older people will be apprehensive that history may repeat itself.

‘We would urge everyone to be mindful of others when they hit the shops, particularly those who will really struggle if they can’t get what they need in their local supermarket.’ It has been reported supermarkets are boosting security and have doubled number of delivery slots amid fears Covid-19 panic buying could return. Pictured: Tesco in south east London The executive director of Waitrose has slammed panic buyers saying their actions ‘inevitably means someone else will go without’. Pictured: Empty shelves at a Sainsbury’s in Wandsworth And restrictions on items which vanished most quickly during the country’s first lockdown, such as flour and eggs, have been put in place. Pictured: Asda in Barnes Hill, Birmingham

The restrictions come as supermarket chiefs look to avoid a over repeat of the stockpiling panic seen in stores at the start of the pandemic in March.

Pictures from supermarkets across the UK have already shown empty or rapidly emptying toilet roll shelves, just days after the government announced tighter restrictions in a bid to stave off a second coronavirus wave.

A Tesco spokesperson said: ‘We have good availability, with plenty of stock to go round, and we would encourage our customers to shop as normal.

‘To ensure that everyone can keep buying what they need, we have introduced bulk-buy limits on a small number of products.

‘To help our customers shop safely, we will also have colleagues at the entrances of our larger stores to remind customers about the safety measures we have in place, including the legal requirement to wear a face covering.’

Asda said they had not witnessed any panic buying in their stores and so no purchasing limits were in place .

However, a shopper has pleaded for people not to be ‘selfish’ by stockpiling household items after shelves in an Asda store in County Durham were left completely empty.

Keith Jackson said shelves of toilet roll in Asda in Stanley had been entirely emptied on Saturday.

When the Covid-19 lockdown was first introduced earlier this year, Britain’s shelves were stripped bare with pasta and toilet paper hard to find.

And it seems with tighter restrictions put in place in the North East, people are reporting a second wave of panic buying.

After seeing the bare shelves in his local supermarket, Keith pleaded for people not to stockpile saying it ‘deprives the vulnerable’ of everyday products adding to their stress.

Keith said: ‘It was just the toilet roll for now, although it wouldn’t surprise me if the pasta and hand wash are next to be stockpiled if we have a repeat of six months ago.

‘I can’t stand stockpiling, I think it’s selfish and unnecessary. There’s enough product in storage to go around.

‘Stockpiling just puts undue strain on supply chains and deprives the vulnerable of everyday products, adding to their stress and anxiety. ‘This feels very much like it did the end of March when I had to go to petrol stations to buy toilet roll.

‘Sadly it feels some people have not learned anything in the last six months, their only concern is for themselves which is a shame.

‘It starts with a minority of people and then others start to panic and join in, for fear of not being able to get hold of the products they need.

‘Then it takes a month or two for the supermarkets to get their stock levels back to normal.’

**Been affected by panic buying? Get in touch at [email protected] **