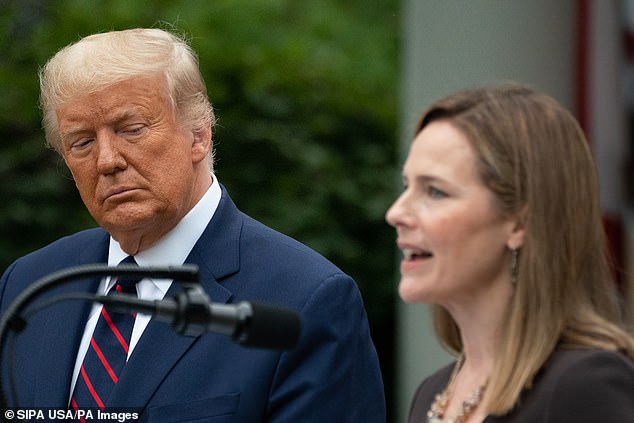 Joe Biden has warned that Donald Trump’s choice of new Supreme Court justice would get rid of Obamacare, repeating once again his demand that a replacement for Ruth Bader Ginsburg not be appointed until after the election.

Biden said that Amy Coney Barrett, officially announced as Trump’s nominee on Saturday evening, was known to be against Obamacare.

‘[Barrett] has a written track record of disagreeing with the U.S. Supreme Court’s decision upholding the Affordable Care Act,’ he said in a statement posted on his website. 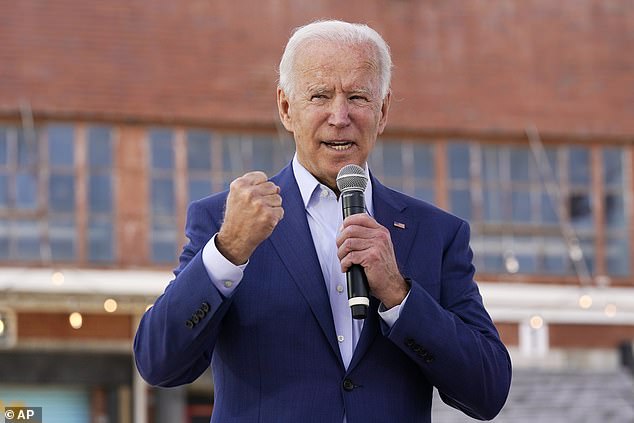 He pointed out that Trump ‘has been trying to throw out the Affordable Care Act for four years’ and that Republicans have been trying to end it for a decade.

Twice, the U.S. Supreme Court upheld the law as constitutional, he said.

‘But even now, in the midst of a global health pandemic, the Trump Administration is asking the U.S. Supreme Court to overturn the entire law, including its protections for people with pre-existing conditions.

‘If President Trump has his way, complications from COVID-19, like lung scarring and heart damage, could become the next deniable pre-existing condition.

Biden said that Barrett was a critic of a 2012 decision from the Supreme Court to uphold Obamacare.

He added: ‘The United States Constitution was designed to give the voters one chance to have their voice heard on who serves on the Court. That moment is now and their voice should be heard.

‘The Senate should not act on this vacancy until after the American people select their next president and the next Congress.’ Barrett, six of her seven children and her husband traveled from Indiana on Saturday

Nancy Pelosi, the Speaker of the House, echoed his concerns.

‘If this nominee is confirmed, millions of families’ health care will be ripped away in the middle of a pandemic that has infected seven million Americans and killed over 200,000 people in our country,’ she said.

‘Every vote to confirm this nominee is a vote to dismantle health care. The American people will hold every Senator responsible for their vote at the ballot box.’

Trump, officially nominating the mother of seven, described her as ‘one of our nation’s most brilliant and gifted legal minds’.

Born in New Orleans, she attended Rhodes College and received her law degree from Notre Dame law school, where she later taught.

She lives in South Bend, Indiana, with her husband and seven children – two of them adopted from Haiti.

Conservatives have heralded the pick of Barrett as the heir-apparent of Justice Antonin Scalia who died in February 2016.

Barrett, who clerked for Scalia, shares his belief in an originalist interpretation of the U.S. Constitution.

Trump added: ‘She is a woman of unparalleled achievement, towering intellect, sterling credentials and unyielding loyalty to the Constitution: Judge Amy Coney Barrett.’

Barrett had been a leading contender for the nomination, having been considered for the seat now occupied by Justice Brett Kavanaugh, who was confirmed in 2018.

The 7th U.S. Circuit Court of Appeals judge had met with Trump this week.

‘This should be a straightforward and prompt confirmation. It should be very easy,’ Trump said with a laugh, adding, ‘Good luck. It will be very quick … We said that the last time, didn’t we?’

Liberals fear that Barrett could chip away the ability for women to get a legal abortion, as the landmark 1973 case Roe v. Wade revolved around a right to privacy, which is not explicitly outlined in the U.S. Constitution.

Barrett would also be replacing a Jewish member of the court with a devout Catholic, bringing the number of Catholics on the bench to six.

Barrett’s faith will likely play a role in her forthcoming Judiciary Committee hearings.

She is a member of the People of Praise, a small Catholic group that teaches husbands are the heads of the family.

The group was inaccurately reported to be the inspiration for Margaret Atwood’s The Handmaid’s Tale, which is now a popular television show because the term ‘handmaid’ was used to describe a member’s personal adviser, if that adviser was female.

Members of the group also swear a loyalty oath, which some legal scholars have found problematic because they raise questions about a judge’s impartiality and independence.

During her 2017 confirmation hearings for a seat on the Chicago-based 7th Circuit, Barrett testified that while she was a devout Catholic, those views wouldn’t bleed into her decisions on the bench.

Sen. Dianne Feinstein, the top Democrat on the Judiciary Committee, famously told Barrett: ‘The dogma lives loudly within you.’