A new proposal could require Californians to work remotely three days a week – even after the COVID-19 pandemic – to reduce greenhouse gas emissions to aid in environmental efforts.

A number of Bay Area residents, including employees at large tech firms, were concerned over a new proposal approved by the Metropolitan Transportation Commission on Wednesday.

The controversial proposal would effectively ensure that sizable, office-based companies kept 60 per cent of their workers at home on any given workday to curb climate change.

‘Given the changes in travel patterns during the coronavirus pandemic, there was strong support for bolder policies on this front in the Final Blueprint, including a mandate for office-based employers,’ the proposal read.

‘To ensure this strategy achieves equity goals, a complementary strategy to expand internet access in underserved communities was added to the Economy Element as well.’

This latest proposal underscores a larger shift towards remote work that became commonplace after the COVID-19 pandemic hit the United States in January.

By March, entire office buildings shuttered and industries stumbled as employers struggled to transfer in-person operations to out of the workplace.

But now, six months later, city officials and some employers viewed the forced transition as a unrealized benefit that could reshape office culture and transportation.

‘There is an opportunity to do things that could not have been done in the past,’ said Oakland Mayor Libby Schaaf, a commission member and proposal supporter, per NBC News. Studies have noted that carbon dioxide emissions, a greenhouse gas, were down in April when lockdown orders were strictly enforced MTC proposal: ‘Given the changes in travel patterns during the coronavirus pandemic, there was strong support for bolder policies on this front in the Final Blueprint, including a mandate for office-based employers’

A May 2020 study from the Nature Climate Change Journal noted that daily carbon dioxide emissions plunged by 17 per cent in the United States during April.

‘The estimated decrease in daily fossil CO2 emissions from the severe and forced confinement of world populations of –17% (–11 to –25%) at its peak are extreme and probably unseen before,’ the study said.

The commission’s proposal was found inside a larger policy package titled ‘Plan Bay Area 2050 Final Blueprint,’ in which officials theorized what the Bay Area could look like in 30 years and what could be done about reducing greenhouse gas emissions.

Members voted 11-1 to approve the overall policy package, including the mandate.

Bay Area is home to Silicon Valley, the central hub of Big Tech firms that have taken different approaches to working from home.

Facebook quickly embraced remote working as a longterm plan and advised its 50,000 staffers to work from home to avoid spreading the coronavirus.

CEO Mark Zuckerberg later announced that the company had extended its work-from-home plan until 2021, allowing employees to avoid the Menlo Park office for the next several months.

Similarly, Twitter, which reported 5,100 employees in its most recent earnings report, ordered employees to work from home . A number of Big Tech firms, including Google, have headquarters in California and were among the industries that transitioned operations online

It was later revealed by CEO Jack Dorsey that the company will allow most of its employees to work from home permanently.

‘Opening offices will be our decision. When and if our employees come back, will be theirs,’ a spokesperson for the company said.

But companies like Apple, that have invested loads of money on its campuses and facilities, have been less eager to fully welcome remote work.

Tim Cook revealed in a recent interview at The Atlantic Festival that he hoped employees would be back in the office by next year and pointed out that remote work doesn’t allow for certain employee interactions.

When word of the plan reached Bay Area residents, many were concerned and logged onto the virtual commission meeting on Wednesday to object.

‘We do not want to continue this as a lifestyle,’ said Steven Buss, a Google software engineer who lives in San Francisco, according to NBC News.

‘We are all sacrificing now to reduce the spread of the virus, but no one is enjoying working from home.

‘It’s probably fine if you own a big house out in the suburbs and you’re nearing retirement, but for young workers like me who live in crowded conditions, working from home is terrible.’ Steven Buss: ‘It’s probably fine if you own a big house out in the suburbs and you’re nearing retirement, but for young workers like me who live in crowded conditions, working from home is terrible’

Some residents noted that the strategy enforces workplace inequality since some jobs cannot be performed at home, while others worried about the effects it would have on other industries as a result.

Stacey Randecker called into the meeting on Wednesday and questioned why the proposal included all commute alternatives if the main focus was on car emissions.

‘Yes, yes, yes, we want to reduce greenhouse gases, but why aren’t you considering transit? Walking? Biking?’ she said.

‘We tried nothing, and we’re all out of ideas,’ he wrote on Tuesday. 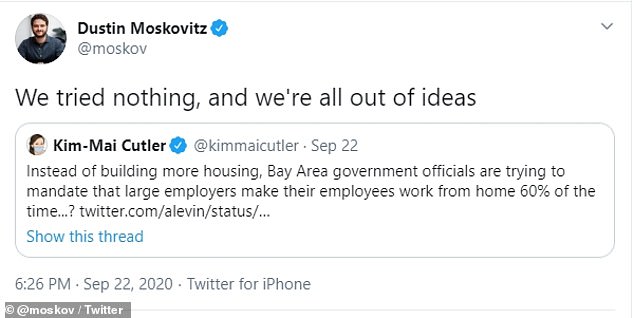 Commission member Nick Josefowitz said the work-from-home proposal was a late addition into the policy package.

NBC News reports that Josefowitz attempted to amend the proposal to allow transit and walking from home as alternatives, but critics worried that a delay could result in the commission missing emission reduction targets and an important funding deadline.

‘If we start amending this plan at this late hour, do you have any rabbits in your hat that’s going to get us to the finish line,’ asked commission member Jim Spering.

The proposal added that the work-from-home strategy ‘was not included in the Draft Blueprint and was added based upon public feedback this summer.’

MTC executive director Therese McMillan said there would be opportunities to later go over the strategy’s details and include alternative transportation.

The commission will meet against before the end of the year and then it would need to be implemented over time. US Election 2020: Mike Pence says ‘this fight ain’t over’