New bodycam footage reveals the tense moments in which a Louisville cop involved in Breonna Taylor’s fatal shooting was moved from the scene after being injured by gunfire.

Sgt. Jonathan Mattingly was struck in the femoral artery and later had to undergo surgery following the shooting that killed the 26-year-old black EMT in March, according to Fox News.

Mattingly had been shot by Taylor’s boyfriend Kenneth Walker who claimed he only fired because the cops didn’t identify themselves.

His lawyer posted the video to Twitter, hitting out that Mattingly had been branded ‘a “murderer,” when all he did was defend himself’.

Sgt. Jonathan Mattingly is allegedly seen on the ground outside Breonna Taylor’s apartment after being shot in the leg by her boyfriend Kenneth Walker in the raid that killed her 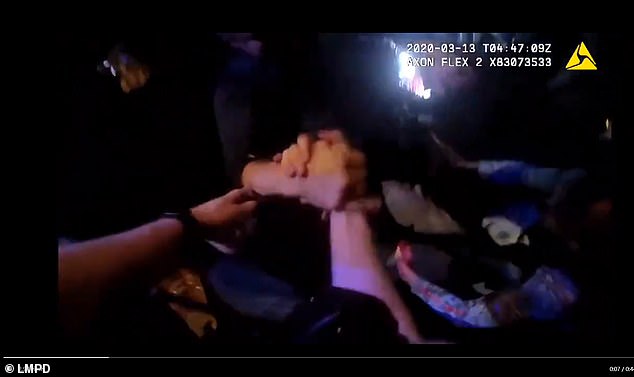 Earlier this week, a Kentucky grand jury decided not to indict Mattingly of any crime in relation to the shooting.

His attorney Todd McMurtry claimed those who still branded him a murderer after the decision needed to ‘retract and apologize immediately’.

McMurty told Fox News that he represents ‘John in his affirmative claims against people who slandered him by calling him a “murderer”‘.

In the bodycam footage, which McMurtry says he received from the officer, Mattingly can be seen lying on the ground while his colleagues purportedly escort him away from the scene of the shooting for medical attention.

Other cops can be saying to ‘grab under his arms’ and ‘cover him, let’s go’ as they attempt to move the injured Mattingly.

‘Go a little faster’, another officer, although no ambulance is seen.

The cops attempt to bring the bleeding Mattingly to the top of a vehicle’s trunk to get him away from the scene.

The car then drives away toward the exit of the apartment complex.

According to Wave 3, the footage picks up just after officers had applied a tourniquet on Mattingly’s leg.

Officers seemed to be unaware if there was still any danger. 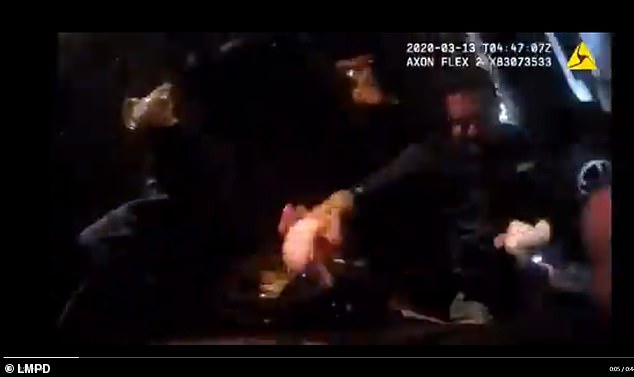 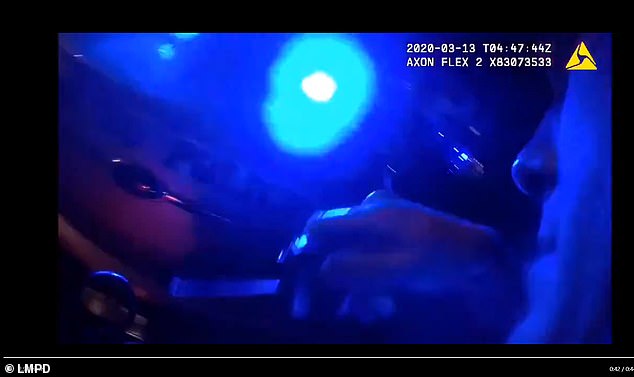 As they moved Mattingly, Taylor was lying inside her apartment after being struck six times and EMS crews had not yet responded.

On Wednesday as he announced the grand jury’s decision on her death Attorney General Daniel Cameron said that she likely died within a minute or two of being shot.

Wave 3 reported that Mattingly’s wife said he’d undergone surgery for five hours while doctors attempted to repair his femoral artery after the shooting.

He allegedly had to receive multiple blood transfusions because he lost so much blood.

The Louisville Metro Police Department has not previously denied that there was bodycam footage from the night but has said that there is none of Taylor’s shooting. 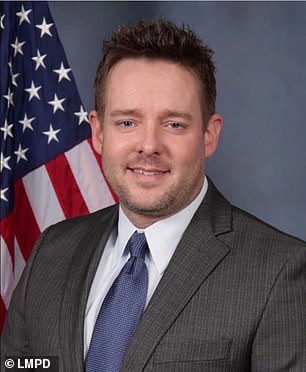 Protests gathered across America on Wednesday as soon as the Kentucky grand jury’s decision over Taylor’s death were revealed as thousands – including her family – voiced outrage over the cops not facing murder charges.

Taylor, 26, was killed on March 13 when Sgt Jonathan Mattingly and Detective Myles Cosgrove and Brett Hankison burst down the door to her home in Louisville while executing a botched late-night raid and shot her six times.

The black EMT died in the bungled raid after officers fired 32 rounds into her home and neighboring addresses.

The search warrant for her home related to a drugs investigation over her ex-boyfriend who was not present at the property and who had been arrested at a different address earlier that night.

More than six months on from her killing, a grand jury returned a decision Wednesday on possible charges against the three cops, choosing to indict just one of the officers – Brett Hankison – on the lesser charges of wanton endangerment.

The first-degree charge, a Class D felony which carries a penalty of up to five years in prison, relates to Hankison shooting into the neighboring apartments during the incident.

No charges were brought against him in relation to the death of Taylor and the other two officers were not charged.