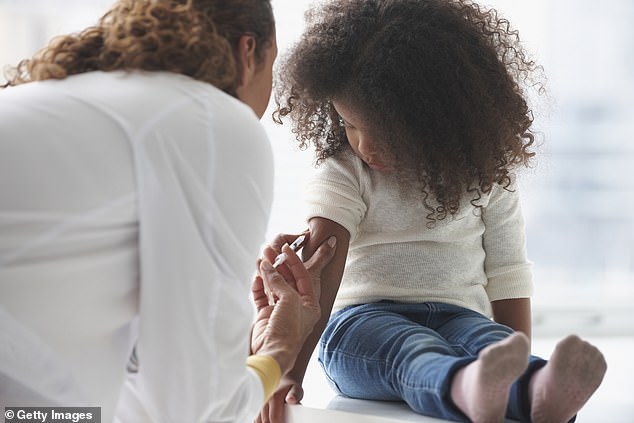 Childhood vaccinations have plummeted in the US amid the coronavirus pandemic, a new report finds.

Between March and May 2020, 1.7 million fewer vaccinations for children up to age two – who are covered under Medicare or the Children’s Health Insurance Program (CHIP) – were administered.

That’s a 22 percent decline from the same time period in 2019, the Centers for Medicare and Medicaid Services (CMS) revealed on Wednesday. Between March and May 2020, 1.7 million fewer vaccinations for children up to age two were administered – a 22% decline (above)

According to CMS, 9.6 million children were enrolled in CHIP in 2018, the most recent year for which data is available.

Children are deemed eligible if they come from in families with incomes too high to qualify for Medicaid, but too low to afford private coverage

Vaccination rates weren’t just lower this year from the year before. They were also lower as 2020 went on.

While some states are seeing inoculations return to levels not seen since February, others are only worsening.

The report found that Alabama, Connecticut, Kentucky, Nebraska and North Carolina had the highest rates among children under age two as of May 2020 with about 700 to 800 vaccinations per 1,000 beneficiaries.

Meanwhile, Arizona, California, the District of Columbia, Hawaii and the US Virgin Island had the lowest rates.

‘To ensure that children catch up on their missed vaccines we need vaccination rates to not only approach those of 2019, but to be much higher, in order to mitigate the 22 percent dip during the early part of the COVID-19,’ CMS said in a statement.

‘The potential for increased outbreaks of infectious disease due to decreased vaccinations is real, and can result in decreased school attendance, decreased learning and increased childhood illness in general.’

In a previous interview, Dr Hanan Tanuos, director of primary care and an associate professor of pediatrics at Rutgers New Jersey Medical School, told DailyMail.com the reason for a drop in childhood vaccination is likely two-fold.

‘I think part of it of course is the parents are afraid to bring their children out and I think the other part is that the availability of doctors is limited,’ she said. 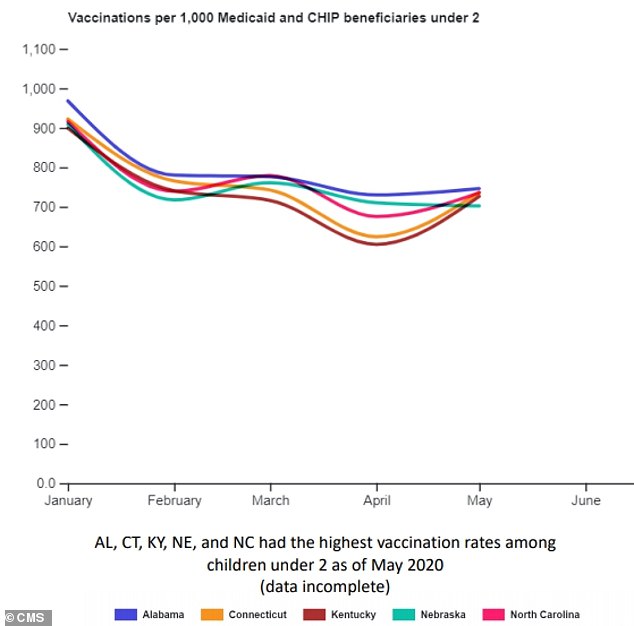 States including Alabama, Kentucky and Nebraska had the highest rates, with about 700 to 800 vaccinations per 1,000 beneficiaries (above) 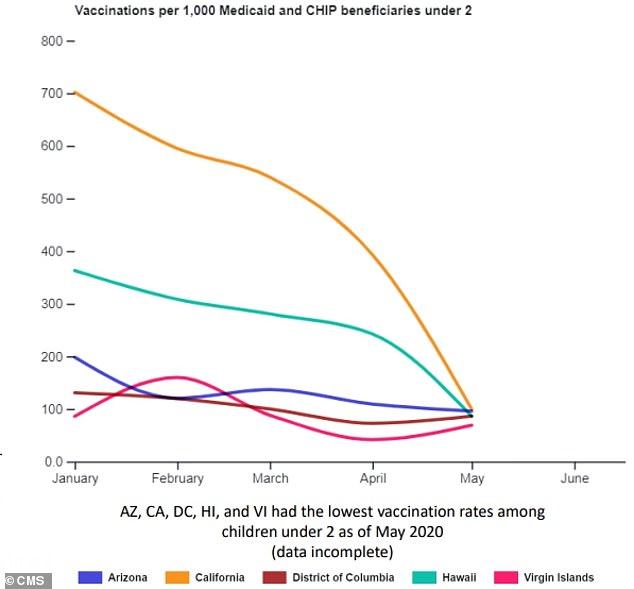 Meanwhile, states such as Atizona, California and Hawaii had the lowest rates with between 100 and 200 vaccinations per 1,000 beneficiaries around May 2020 (above)

Public health officials have warned for years that vaccines not only protect individuals but the community as a whole in what is known as ‘herd immunity’.

This occurs when the vast majority of a community – between 80 and 95 percent – becomes immune so that, if a disease is introduced, it is unable to spread.

Therefore, those who are unable to be vaccinated, including the ill, very young and very old, are protected.

Now, health authorities are worried that falling rates might destroy the herd immunity that had been built up against certain diseases.

‘If this goes on for long enough and enough children don’t get vaccinated, then we might see small outbreaks of some of these diseases, some more easily than others,’ Dr Joseph Schwab, an associate professor of pediatrics at Rutgers New Jersey Medical School, told DailyMail.com.

Vaccinations were not the only medical services for children from low-income families that saw a decline.

‘Not only must state and local agencies, providers, schools and other key stakeholders work on returning to prior year treatment levels, they must also strive to treat the millions of children who have already missed important medical services. This is essential, as missing these services can have long-term negative impacts on children’s health outcomes,’ CMS said in a statement. Mutant British variant of coronavirus ‘is probably already in the US’ In Diego’s name: a raging Napoli destroyed Roma wearing the albiceleste | The State 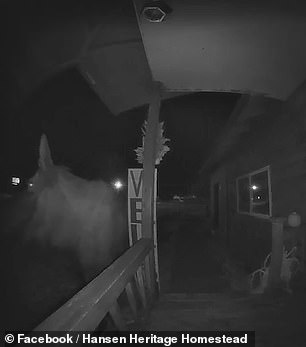