Hold onto your hats (and MASKS)! Britain braces for 65mph winds and heavy ‘persistent’ rain tomorrow – with sunny weekend with highs of just 15C

By Mark Duell for MailOnline

Parts of Britain are bracing for 65mph winds tomorrow after the country’s coldest September night in 23 years.

The Met Office warned strong gusts and ‘persistent rain’ will hit eastern England from 9am tomorrow amid fears over power cuts, train disruption, delays on the roads and coastal areas being affected by spray and large waves.

It comes after the mercury fell to -5C (23F) at Altnaharra in the Scottish Highlands last night, making it the coldest September night in the UK since 1997. The record minimum for the month was -6.7C (19.9F) at Dalwhinnie in 1942. Forecasters said strong northerly winds are expected to develop across East Anglia tomorrow morning and persist into the evening, with gusts of 45mph to 55mph likely with 60mph to 65mph gusts at times in coastal areas.

People in Essex, Suffolk and Norfolk were warned to expect ‘delays to road, rail, air and ferry transport’ and ‘delays for high-sided vehicles on exposed routes and bridges’ as well as ‘short term loss of power and other services’.

Temperatures will only get up to 15C (59F) in the South today after yesterday’s high of 20.6C (69.1F) at Manston in Kent, and 26C (78.8F) both at Santon Downham in Suffolk on Tuesday and Yeovilton in Somerset on Monday.

The autumn equinox heralded the breakdown of the fine, sunny conditions which had dominated the weather for ten days, with a cold front now having moved south along with patchy rain and northerly winds bringing Arctic air. Rowers next to the River Thames in Putney, South West London, today on a day of rain showers and sunny spells Saturday and Sunday are set to be mostly dry and sunny for most of England and Wales but chilly, with similar temperatures to today and tomorrow. There is also set to be more cloud in western areas.

The Met Office has predicted more unsettled weather next week with ‘cloud and outbreaks of drizzle affecting the east and west at first with dry weather in between on Monday’.

Forecasters added: ‘There will be generally windy weather coupled with showers and occasional longer spells of rain at times. The heaviest rain most likely in the west and northwest, which may also see gales.’ Rapper Offset livestreams himself being detained by cops in Beverly Hills 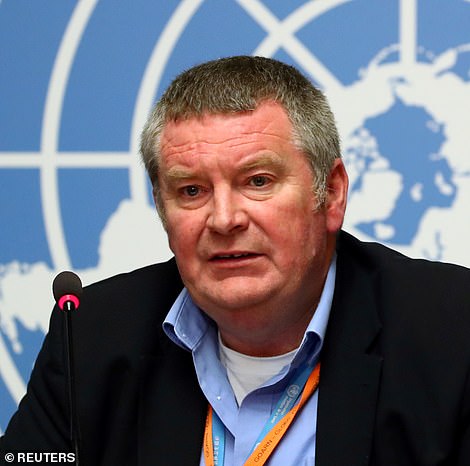 760MILLION people ‘have had Covid-19’: WHO predicts 10% have caught disease

First Caribbean inhabitants wiped out by invaders from South America 1,000 years BEFORE Columbus