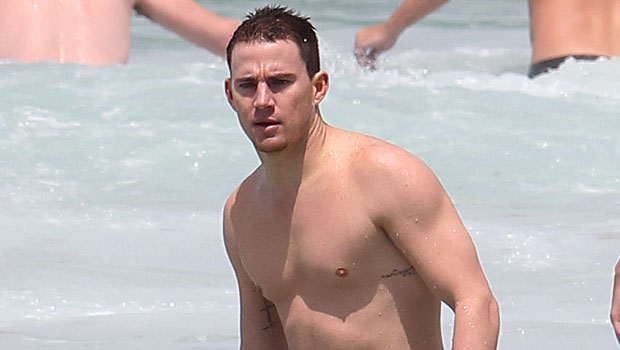 No dad bods here! Channing Tatum, 40, celebrated the return of his “Daddy” body, which he debuted in a sizzling hot mirror selfie that the Step Up star posted to Instagram on Sept. 24. Back was the eight-pack that once graced movie screens when Channing starred as a male stripper on Magic Mike, as well as the bulging biceps!

Channing explained that this fitness transformation had long been in the making. “It’s been a long road back. Injuries, life shit, and just insanity in general,” he began in his shirtless selfies’s caption. With that said, Channing was happy to write, “Ha daddy is finally back boooi!! Gonna be a fun next 10 year run. To all those that have been there for me and held me down through it all. I love you. I’m gonna make ya proud. Let’s goo. Also peep the purell bottle. Keep it clean out there folks. Hahaha.”

It’s no surprise to see Channing in tip-top shape, since he’s currently filming his directorial debut movie: Dog. Three days before revealing his new muscles, Channing shared a photo that was taken during the first day of production for the new movie that he is also starring in (and yes, it was evident that the movie star was very in shape). The movie follows “an army ranger and his dog” who “embark on a road trip along the Pacific Coast Highway to attend a friend’s funeral,” according to the project’s IMDb page.

Channing was especially looking forward to the next two months of production. In his Sept. 21 Instagram post, he wrote, “It’s already been a crazy ride. And we’ve only just begun. And if we survive the rest, it will be one of the most insane stories that I’ve ever been a part of. And I’ve been a part of some pretty crazy ones in this life of mine. This photo is from our first day of production on the first movie that my partner Reid and I are directing. This is our story. It’s taken us two years to get it to the starting line. The next eight weeks will be like riding a bull on sickmode in ludicrous speed. God be with us. In Dog we trust.”

Channing has bounced back after experiencing ups and downs in his love life. Following the end of his eight-year marriage with his Step Up co-star Jenna Dewan in April of 2018, Channing went on to begin dating singer Jessie J later that year. Although they too eventually split in Nov. 2019, it was reported that they were “spending time” together by Jan. 2020, which ultimately ended with another report of their breakup in April of this year. “The split was amicable and they’re still in contact. They’re spending time apart and are open to meeting new people. But you shouldn’t bet against another reunion in the future,” a source told The Sun. At least Channing’s looking good (although he always has). Facebook’s vice president of AR and VR Hugo Barra is leaving the company, he announced (where else) on Facebook Monday.