Dozens of recovering addicts are sharing their harrowing but hopeful stories of overcoming addiction in a growing online support community.

The Addict’s Diary was founded by Kevin Alter, 31, himself an ex-heroin user who went to rehab 29 times and was homeless for 12 years during his twenties — and went on to become a motivational speaker who started the community to help others with their recovery.

His blog and social media channels — which also offer resources to those in need — have become a place where other recovering addicts can inspire others, and where many have shared stunning before and after photos that document the physical transformation of getting clean and sober. 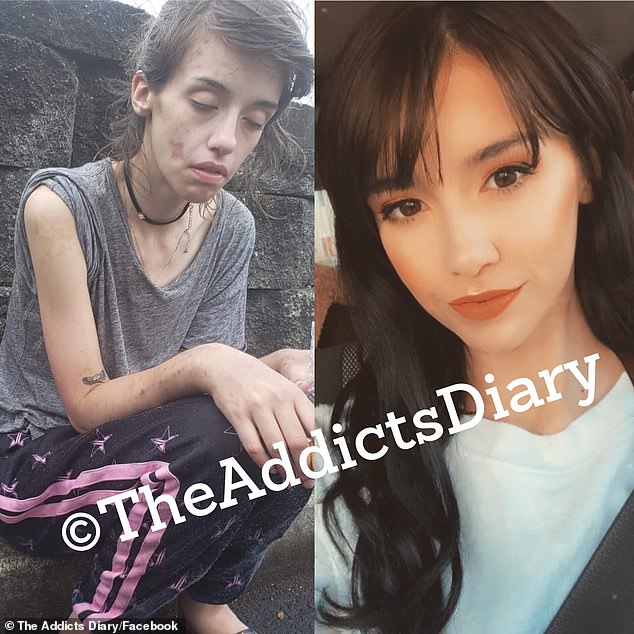 Hopeful stories: Former addicts are sharing their stories on the Facebook page for The Addict’s Diary, including Amber Hoffman (pictured), who said ‘it’s cool to be back to living’ 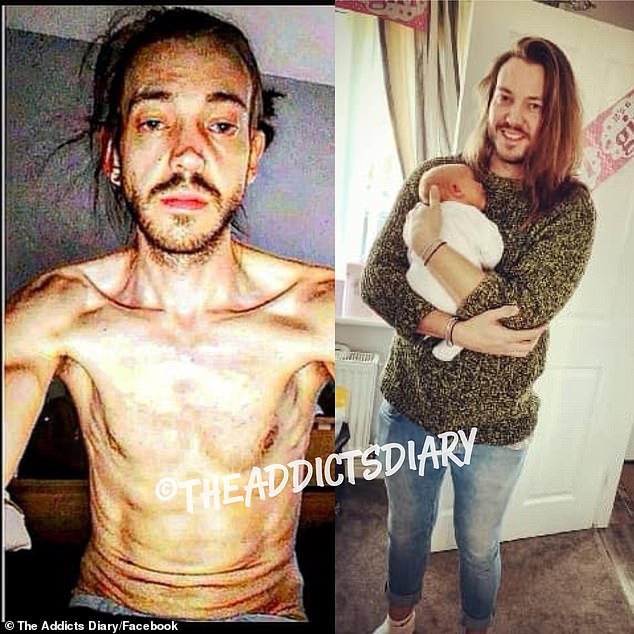 Before and after: A man shared a 613-day-old photo of himself when he entered rehab (left) compared to himself today (right)

Kevin, a Long Island, New York native, first dabbled in cocaine with friends when he was just 17 and quickly became hooked. He turned to heroin in college and things spiraled out of control until he worked successfully to get sober over three years ago.

To help others, he went on to speak at schools across the US to help with drug prevention, and he launched The Addict’s Diary to build a supportive community.

There, on the group’s Facebook page, others who have overcome addiction have told their own stories.

One post was shared by Amber Hoffman, 24, whose story went viral earlier this year. In February, she marked six months of sobriety.

‘From dying in the streets from a heart infection, to sleeping in my car starving for days at a time,’ she said.

‘To being turned away from the hospital and left to die because they wouldn’t treat me, to abandoned by everyone and everything, I found the strength to get clean, get treatment at a different hospital, get the heart surgery I needed, and from there I stayed clean even though I was still homeless.

‘It’s been a rough ride but it’s now been six months since then! I’ve come so far,’ she went on. ‘I thought I would be dead by the end of the year last year. But I’m thriving more than ever. It’s cool to be back to living.’ 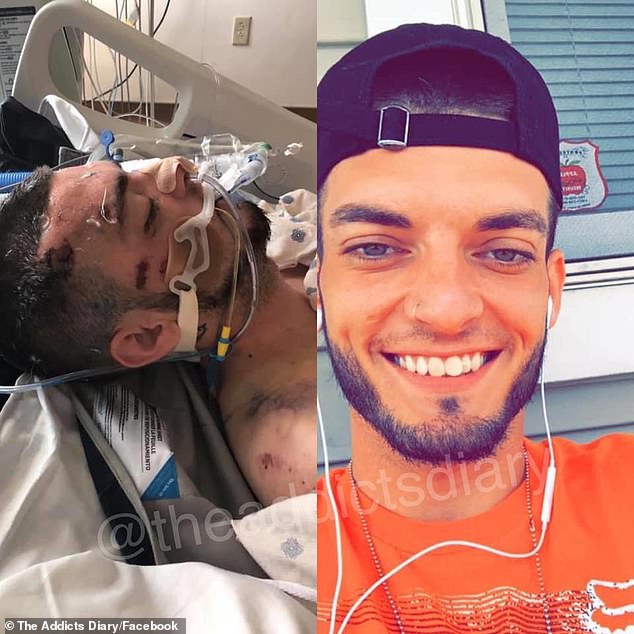 Transformed:  Jorden shared a recent photo in which he is smiling and happy (right) — a far cry from how he looked while he was hospitalized, addicted to heroin and meth (left) 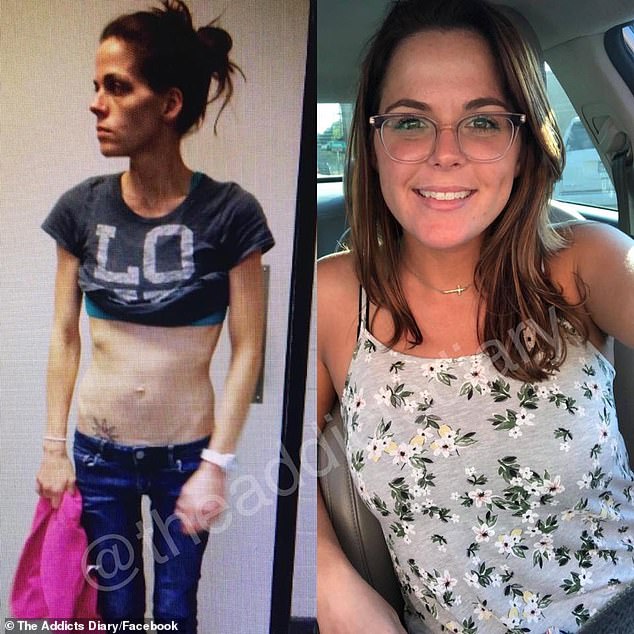 Much better! A young woman name Emerald said she was living in motel rooms and shelters while addicted to meth and heroin, but she has ‘found peace for the first time in my life’

Meanwhile, a man shared a 613-day-old photo of himself when he entered rehab, in which he was clearly worse for wear.

‘Physically, mentally & spiritually broken. I’d lost everything and thought that death was what I deserved,’ he said. But ‘613 days later I’m still clean and sober and I only look back to learn from the lesson that my addiction taught me.’

In his after photo, he looks not just healthier but happier, smiling wide as he holds a baby to his chest.

Another young man named Jorden shared a recent photo in which he is smiling and happy — a far cry from how he looked while he was hospitalized, addicted to heroin and meth.

‘My inability to deal with life lead to me to a needle and spoon. I lived in complete misery and dereliction for years, feeling sorry for myself and using anyone I could to get my next shot of dope. I’ve had multiple overdoses and many other life threatening situations,’ he said.

He was homeless for years, and tried treatment eight different times, the last time being court-ordered. 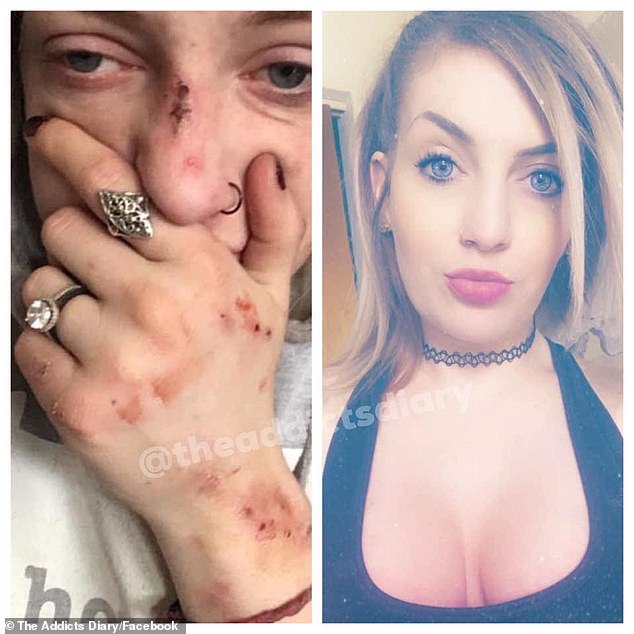 ‘I’m not embarrassed by the photo on the left, because I’m empowered to keep going by knowing how far I’ve come and what I’ve overcame to be the girl on the right,’ said this woman 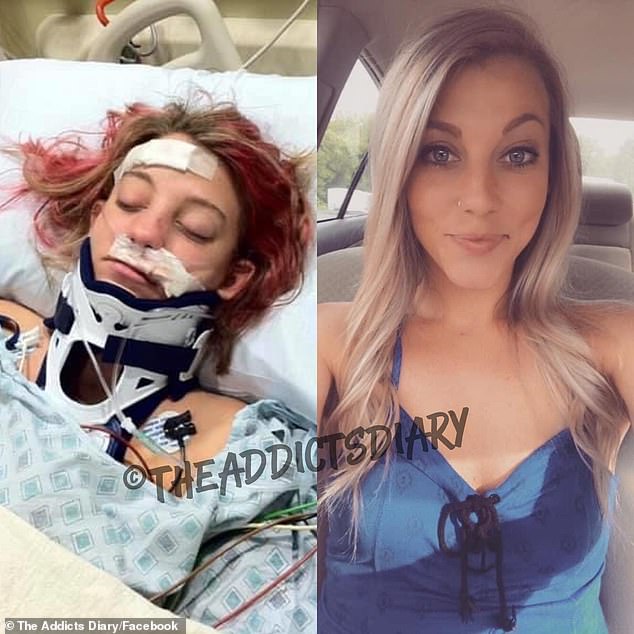 ‘Change is possible. So glad I finally decided to ask for help,’ said another woman (pictured) 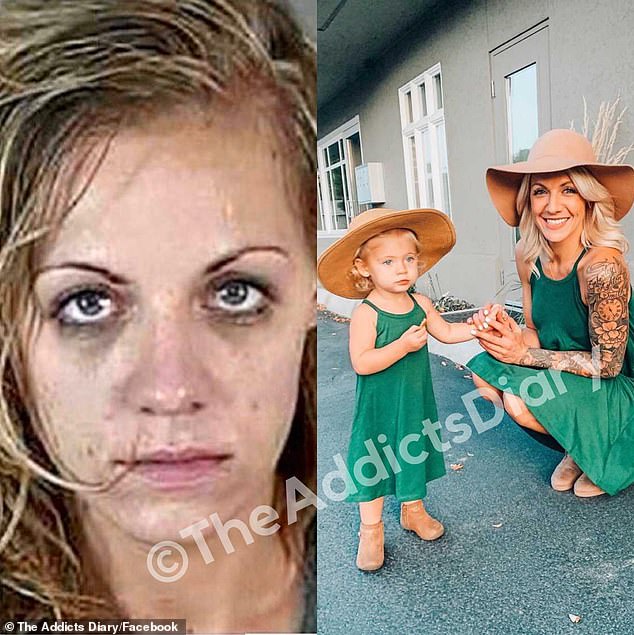 Amazing! This woman was ‘running from the cops, strung out on heroin, and getting arrested’ (left) but says her daughter ‘saved my life and I am now celebrating a little over 2 years clean’

‘I remember being sick to my stomach that I had to try and do this thing again. The longer I stayed and actually put forth some effort things started to change. I started realizing that drugs were never the problem, my thinking and my reaction to drugs was the problem,’ he said.

Celebrating six months of sobriety, he said: ‘I’ve finally reached the point where I’m grateful today that I don’t have to pick up or put one in me when life gets hard. If I can do it so can you.

A young woman name Emerald said she was living in motel rooms and shelters while addicted to meth and heroin, and had both of her sons taken away from her.

Twenty-one months drug-free as of June, she has custody of her kids again and has ‘found peace for the first time in my life.’

Yet another young woman shared a photo of herself covered in bleeding wounds and scabs, and thanks Narcan for saving her life. 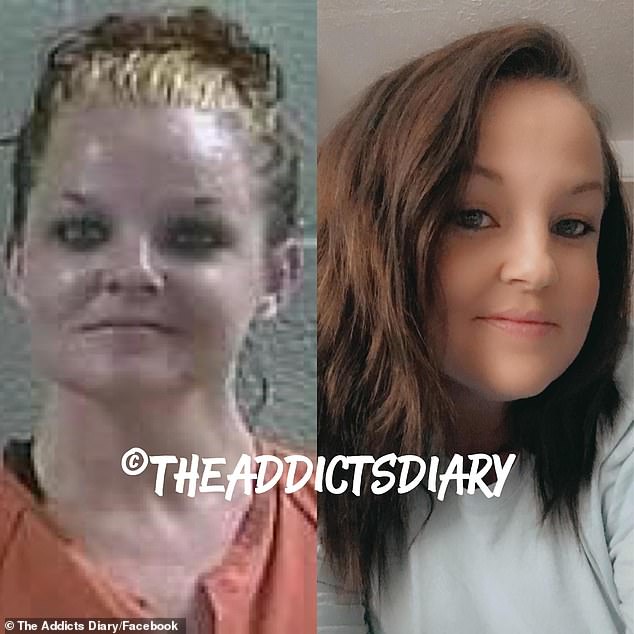 Religion: This young woman was a drug addict for eight years, with two times on life support after ODing. But, she said, ‘God saw fit to give me another chance’

‘I’m not embarrassed by the photo [from before], because I’m empowered to keep going by knowing how far I’ve come and what I’ve overcame to be the girl [I am now],’ she said.

Others have shared photos of themselves in the hospital, covered in sores, and zoned out in mugshots.

Hadassah, who was a teenager when she had her son Braxton, said she ‘still wanted to be a teenager’ after she gave birth, turning to alcohol, then marijuana, and then other drugs including meth.

‘Before my meth addiction I was sexually trafficked in 3 different states. I was only 19 years old. My son was left without his mommy,’ she recalled.

‘I fell into a cycle of sexual abuse, trauma, partying, and only being a mom 2 days out of the week. Meth was introduced to me. Meth took away the pain my abusers inflicted on me. And the pain I had of knowing what I had done to my son.’

After several years, she managed to get clean. 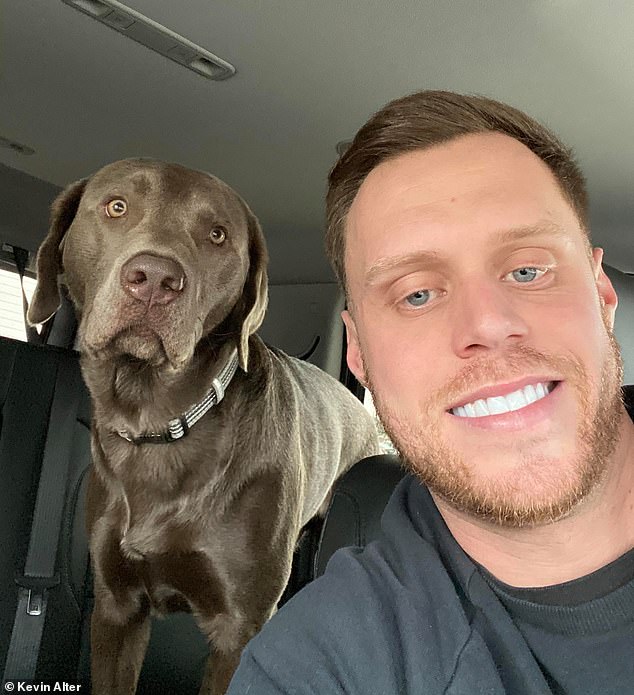 Open: Kevin Alter, 31, the founder of the project, has shared his own story 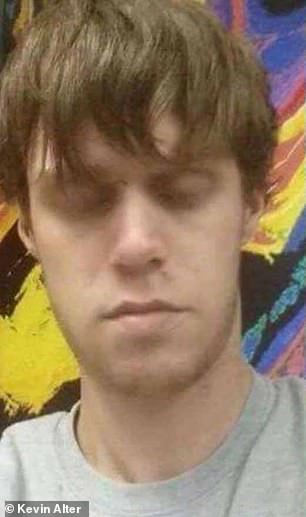 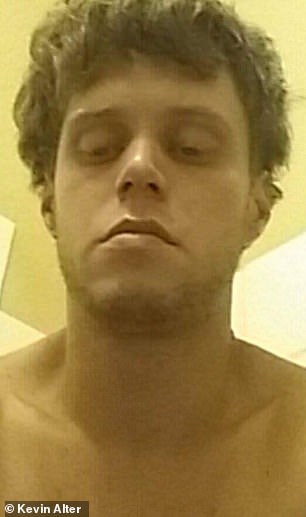 The Long Island, New York native first dabbled in cocaine with friends when he was just 17 but quickly became hooked (pictured during his addiction)

Meanwhile, Kevin, the founder of the project, has been open about his own story.

‘I started pretty much straight with heroin, and so from there heroin would take over my life for the next 11 years,’ Kevin told Fox News. ‘I lost my entire 20s to a syringe and a bag of heroin.’

Kevin said he missed years of family birthdays and special occasions while he slept in a train station in Queens while trying to make money to get his next hit.

And it wasn’t until he was living in a stairwell in the Bronx with a friend he had met in detox that it hit him that he needed help.

‘Every bridge had been burned, but someone presented me with an opportunity to go to treatment and they offered to come [and] get me,’ he said. 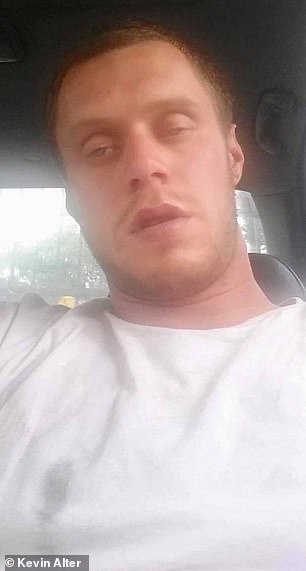 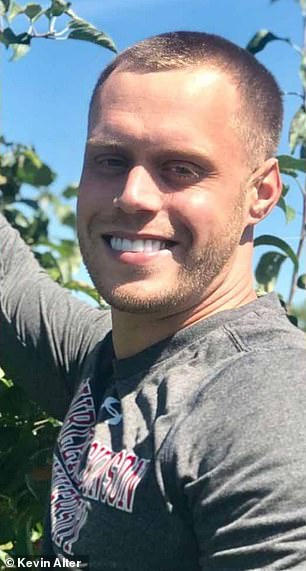 Tough: Kevin (pictured left during addiction and right sober) says he missed years of family birthdays and special occasions while he slept in a train station in Queens, trying to make money to get his next hit 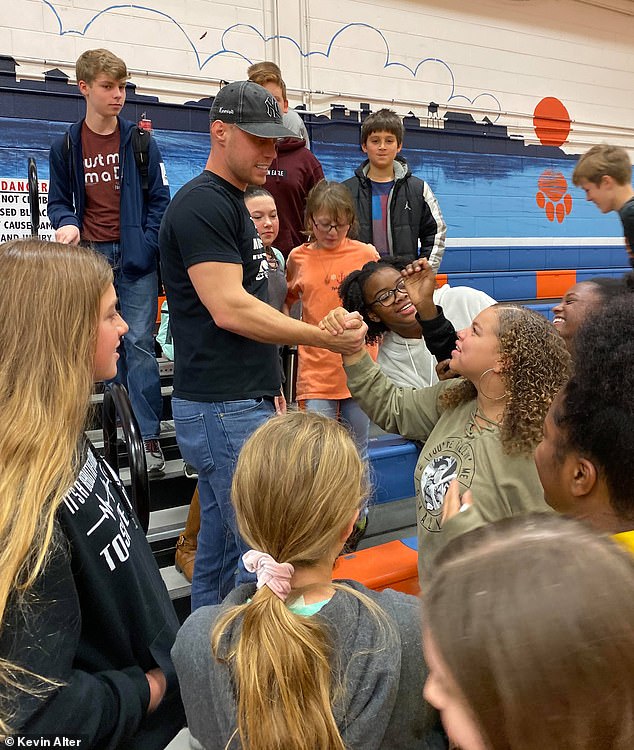 Spreading the word: Kevin said that the page has lead to his career as an inspirational speaker, with him telling his story to more than 50,000 students to date

Kevin said that he ‘thought he was going to be a heroin addict forever,’ but when he was asked to write down his life story in rehab, he was shocked when he could only think of five milestones.

His therapist later asked him the reason he got high, and it dawned on him that he had never thought about it before.

Once Kevin understood that it was low self-esteem that had pushed him towards drugs, he began to learn how to love himself while sober.

Now a resource for others, he said, ‘The most common call I get is a mom [who] wants their kid to get help and has the means and can afford to get help but can’t get the kid to accept help, and they’re just getting run over by their kids.’