Wilko and Walkers staff make a clean sweep: Staff from the household goods company and the crisps giant join in great British litter-pick

By Xantham Leatham For The Daily Mail

Walkers and Wilko have thrown their weight behind the Great British September Clean with hundreds of staff helping out.

The crisp giant and household goods company are official partners of the campaign organised by Keep Britain Tidy and backed by the Daily Mail.

Both organised litter picks at the weekend, with Wilko staff taking part in a clean-up outside their base in Gravesend, Kent, while employees from Walkers arranged their own individual clean-ups.

Walkers brand manager Nick Day got his family to take part in a pick near his home in Tring, Hertfordshire. 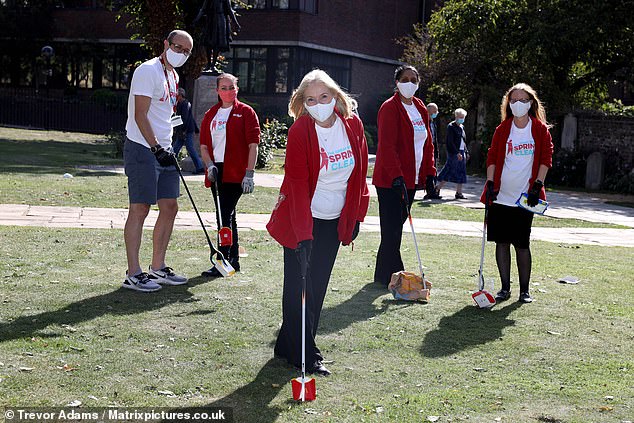 Wilko have thrown their weight behind the Great British September Clean with staff taking part in a clean-up outside their base in Gravesend, Kent

Last year the firm set up litter picks at its Leicester factory and offices in Reading and Belfast, with 100 people taking part.

This year more than 200 employees have organised individual clean-ups.

Walkers, promoted by Match of the Day host Gary Lineker, also has a ‘Planet Team’ to co-ordinate picks in communities throughout the year.

The firm said it was made up of people who are passionate about the environment.

The Walkers factory does not send any waste to landfill. Potato peelings are turned into electricity and provide a quarter of the company’s power every year.

Mr Day said: ‘It’s fantastic to be supporting the Great British September Clean. It’s a great opportunity for us to give something back and have a positive impact on our planet.

‘We usually do our litter picks as a team, close to our factory and offices, but things are obviously a bit different this year.

‘What it means is the Walkers team are now out and about, across the UK, with hundreds of people collecting litter with their families.’

Meanwhile, a team from Wilko took part in a litter pick outside its Gravesend base.

The company has worked with Keep Britain Tidy for three years and says it is proud to be supporting the campaign. 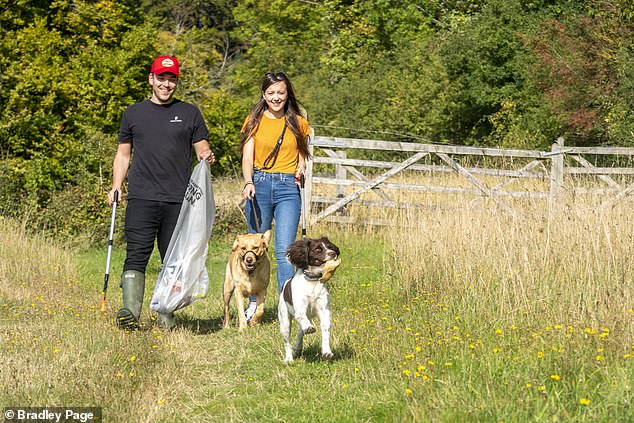 Walkers brand manager Nick Day got his partner Sarah and their dogs, Springer spaniel Rolo and Labradour Tess, (above) to take part in a litter pick near his home in Tring, Hertfordshire

It is stocking stores with affordable litter-collecting equipment including pickers and bin bags.

More than 600 staff took part last year and this year the company is encouraging team members to host their own litter picks.

Neil Feakins, of Wilko, said: ‘At Wilko, we’ve been doing our bit to support our local communities for over 90 years.

‘We love to get stuck in and we’re all about the little wins. That’s why we’re encouraging all our team members from stores to support centres and logistics to pull together, alongside our customers, to take part in the Great British September Clean.

‘We know it’s been tough these past few months but it’s never been more important to show the power of what little actions can have. Making sure our high streets and places we shop are clean and tidy means we can begin to safely enjoy them and appreciate them a little bit more.’

The Great British September Clean runs until Sunday. For more information, or to pledge to take part, visit keepbritaintidy.org/gbseptemberclean.