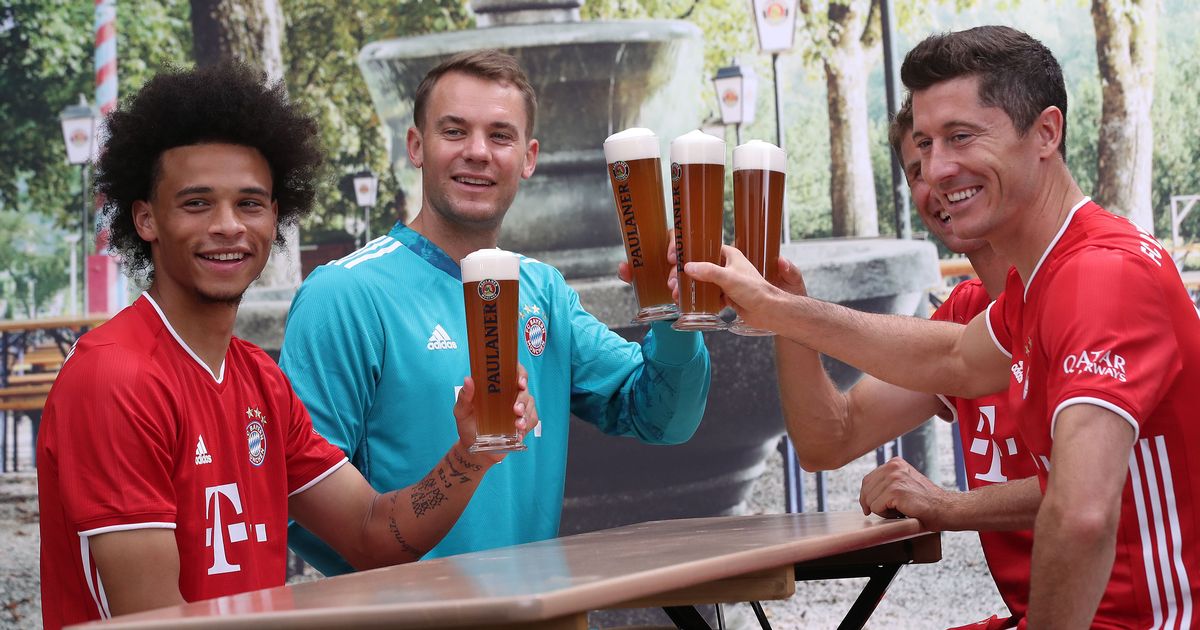 Bayern Munich are in a season of change, with the absence of Thiago Alcantara and the arrival of Leroy Sane to consider.

The squad made their annual trip to beer sponsors Paulaner, whose product is most regularly seen being thrown across the pitch in Bundesliga title celebrations at the Allianz Stadium.

But a big character was missing in Thiago, having made an impressive Premier League debut for Liverpool after a £26m move.

Spending seven seasons at Bayern on the way to seven consecutive titles, the Spaniard was regularly seen donning the lederhosen for the beer festivals.

His shoes will be filled, though, by Sane who has already impressed fans since his £54m move from Manchester City.

The German grabbed a goal and two assists as he played on the right wing in the club’s 8-0 win over Schalke to open their 2020/21 campaign.

But, having spent most of last season on the injury bench and with Ivan Perisic back at Inter Milan after his loan spell, the pressure could be piled on his shoulders quickly to perform.

Sane played his first game on the right wing a 4-2-3-1, where he is likely to stay for the rest of the season.

Should injury strike again, though, he will have more than enough backup in Kingsley Coman and Corentin Tolisso.

And there may be a sense among fans that the forward is arriving to become a future leader of the side.

Robert Lewandowski is now 32 years old and, while he can still find the back of the net regularly for Bayern, may be thinking about pastures new.

While goalkeeper and captain Manuel Neuer is the oldest in the team at 34, starting to think about passing on his secrets of the leadership trade.

So fans can maybe expect to see the 24-year-old being taken under the wing of the Bundesliga stars for his first campaign.

With Sane fitting in as a the superstar signing leading Bayern to a new future, the ghost of the past lies in Thiago’s incredible numbers.

The midfielder average 91 per-cent pass completion over the last four seasons, making 82 completed passes per game over that time.

His shirt has been taken over by Joshua Kimmich, who impressed in his own right with by creating the most chances in the Champions League last season (27).

The German has little cover in this position, with the ageing Javi Martinez, youngster Michael Cuisance and academy graduate Adrian Fein on the roster.

Bayern’s school of football has created some incredible talents such as David Alaba – but they may need another one to come through soon or take another dip into the transfer market.

You would need to be brave to bet against beer flowing on the Bayern home turf again this season, in a season where Sane could learn from the best and Thiago’s position allow new talents to emerge.