The landscape of the entertainment worlds is changing, more so now in this Covid era, which is proof that consumption of entertainment has evolved. OTT platforms are on the front line now and constantly acquiring original content as well as big Bollywood stars to be the part of their scheme of things.

Hrithik Roshan is reportedly being pursued by Hotstar, which is shelling out a whopping sum of Rs 75-80 crore to get the actor on board to star in the Hindi version of Tom Hiddleston’s The Night Manager.

However, does this now mean that the very democratic and level-playing nature of the platform is going to take a hit and they, too, are on their way to star chasing?

“The big stars will soon replace the existing ones who have been delivering on OTT. What happens is that the budgets will get swallowed up by the big stars, so I am sure Hrithik will swallow up what many smaller actors would have taken,” shares filmmaker Ken Ghosh, who has directed several web series.

He goes on to add, “At the end of the day if Hrithik delivers the numbers in terms of what has been invested then it will work. But if Hrithik is on Hotstar then some other platform may say, ‘no I want to only make content with new people’. The beauty is you will have a choice of both.”

Not just Roshan, actors Saif Ali Khan, Nawazuddin Siddiqui, Abhishek Bachchan, Jacqueline Fernandez have dabbled with the medium. Akshay Kumar is also set to be a part of an original OTT show soon.

A prominent name on OTT, actor Rajesh Tailang points out how it is only now that stars who are established in film industry and those who are still a hit among the masses are now opening up to the OTTs.

“Pehle jo stars kam chal rahe hai bas woh OTT pe aate the. I am not worried about stars coming on OTTs but stars ke aane se content na badal jaye. That is the concern. When a star is part of a project a lot of changes are made. I fear that OTTs should not become total commercial. After stars come on board a project they make changes to suit their preferences. The OTT shows/films have never revolved around the protagonist, supporting cast has been very crucial as well, so I don’t know how that is going to play out now,” fears Tailang.

Actor Jaideep Ahlawat says while no one can stop the stars from coming on OTTs, it is not a concern at all as it is up to the audience and in today’s time they are not as star-driven as before.

“Yes more OTT projects will be made. This is just a start and a lot of actors will come on OTTs. But at the end of the day the power lies in the hands of the audience and they will decide what they want to watch, jisko jo pasand nahi hai, who band kar dega, unke haath mein button hai, it is as simple as that. One has to be very clear about the quality of product and storyline I don’t think that it can be a star-driven thing,” shares the Pataal Lok actor.

But there are still many who feel that the content in OTT has proved is that it’s a fair playground for all kinds of talent to thrive in.

“Stars are an attractive lure both for these platforms and viewers. Having said that, the presence of a star will significantly balloon the budget for a film or series. For a content platform to survive, they will need all types of content to make it feasible for them to operate. So my sense is there will be a demand in various degrees for both kinds of content vehicles – star led, and otherwise, depending on the content strategy of the platform at that point,” shares Siddharth Anand Kumar, Vice President – Films & Events at Saregama India Ltd.

Actor Shriya Pilgaonkar opines, “We don’t have to be pessimistic about it, we can all have opportunities. Yes more stars are coming up on OTTs and may be OTTs will pursue more stars for original content but I am still hopeful that it will remain to be a democratic platform as it has always been.”

Echoing the same sentiment, Nachiket Pantvaidya, CEO, ALTBalaji and Group COO, Balaji Telefilms Ltd, says that the storyline, unique marketing strategies and the fresh faces on streaming platforms are redefining entertainment while being loved by the audience and critics as well.

“The actors are roped in based on the story and the script’s demand and how well they can define the role, rather than just popularity. In fact because OTT allows experimenting with unique narratives, this medium helps in providing platform to fresh talent across, encouraging new faces,” he shares.

“Otherwise, I doubt if star value alone would cut it for the bigger OTT platforms. Their audiences are far more discerning and might reject content that doesn’t match their expectations. Secondly, OTT platforms by virtue of working on the subscription model cannot depend on floating audiences who come in for one film and leave. So they need content that compels the audiences to stay. A big star will draw the audiences but OTT needs for the viewer to stay on,” Pandit adds.

Sanjeev Lamba, Executive Producer, Hungama Originals feels that in the immediate future, star system taking over OTTs looks doubtful. “It is possible that in the long run, actors who have achieved resounding success in the space may become the most sought after talent for digital shows, like it happens in film and television industries. However, the OTT space is vast and under-tapped, and there is unlikely to be any dearth of stories for actors, seasoned or novice, to act in,” he says. 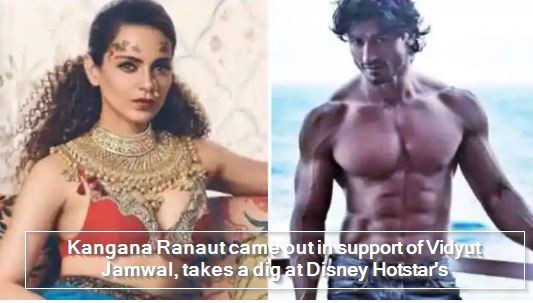 Kangana Ranaut came out in support of Vidyut Jamwal, takes a dig at Disney Hotstar’s

Hema Malini shares throwback pic dressed as a goddess as 14-year old: ‘Wanted to add it in my biography, couldn’t find the image then’