Democrats have threatened to pack the Supreme Court if Donald Trump’s nomination gets confirmed following the death of Ruth Bader Ginsburg.

The president on Saturday urged the GOP-run Senate to consider ‘without delay’ his upcoming nomination to fill the seat vacated by Justice Ginsburg, who died Friday. The move comes just six weeks before the election.

Since 1869 nine justices have served on the nation’s highest court.

Several Democrats have vowed the party will expand the size of the court if they capture the Senate in November and Republicans have pushed through a conservative successor to Ginsburg.

Joe Kennedy III, who represents Massachusetts’ 4th Congressional District and is the grandson of Robert F. Kennedy, tweeted Sunday: ‘If he holds a vote in 2020, we pack the court in 2021. It’s that simple.’

House Judiciary Chairman Jerry Nadler wrote on Twitter: ‘If Sen. McConnell and @SenateGOP were to force through a nominee during the lame-duck session — before a new Senate and President can take office – then the incoming Senate should immediately move to expand the Supreme Court.’

‘If he violates it, when Democrats control the Senate in the next Congress, we must abolish the filibuster and expand the Supreme Court.’

Senator Elizabeth Warren, vice presidential candidate Kamala Harris, as well as former Rep. Beto O’Rourke had already raised the possibility of adding as many as six seats to the nine-seat court, even before Ginberg’s death.

Democrat presidential hopeful Joe Biden is yet to wade in on the matter of packing the court. 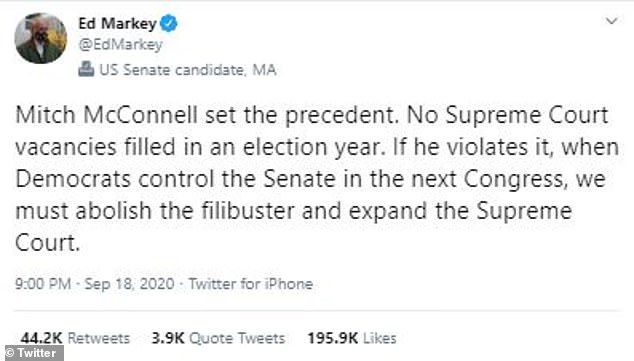 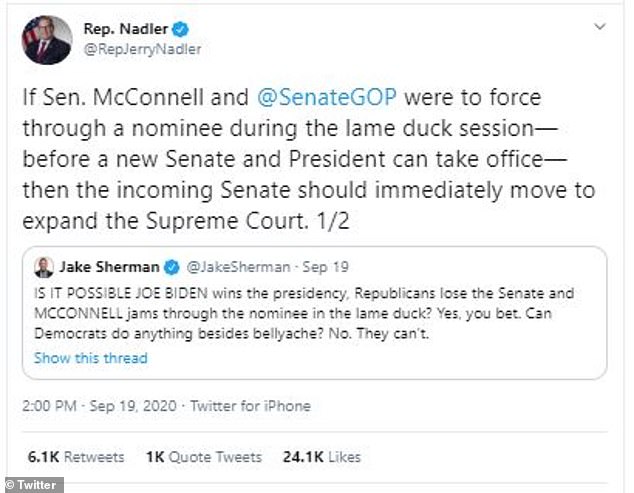 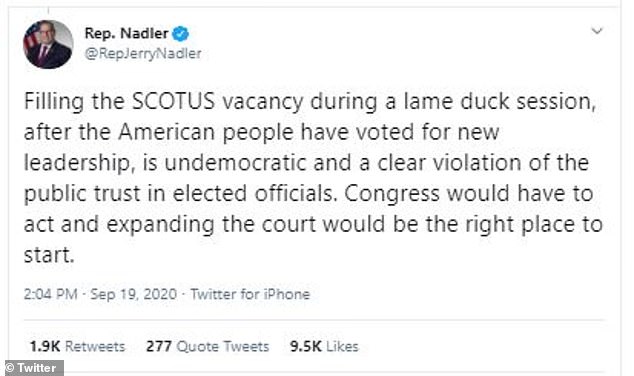 What is court packing?

Court packing is the move to appoint extra justices to the Supreme Court in order to increase the stronghold of one party.

Franklin D. Roosevelt made attempts to pack the court back in 1937 when the Republican president wanted to pass his New Deal laws and needed more conservative justices in the court to vote in favor of them.

However, back in 2019, Biden spoke out against the practice.

‘No, I’m not prepared to go on and try to pack the court, because we’ll live to rue that day,’ he told Iowa Starting Line in July 2019.

As long as the GOP holds a majority in the Senate, it’s unlikely a Democratic president could add more justices.

It would take an act of Congress to change the number on the high court.

The concept of court packing is a controversial one.

There is no set requirement on how many justices there should be in the Supreme Court.

While there are nine now, George Washington had six and Abraham Lincoln had 10.

President Franklin D. Roosevelt attempted to pack the court with 15 in 1937 after watching the high court deal setbacks to his New Deal initiatives.

That legislation was unpopular with the public and ultimately stalled.

He sought to expand the court to as many as 15 judges but many Republicans – as well as some Democrats – opposed his plan, slamming it as a move to enable him to appoint judges that would push through his laws.

Ginsburg herself has criticized the move, telling NPR in an interview last year that it is a ‘bad idea’ and would ‘make the court appear partisan’.

‘Nine seems to be a good number. It’s been that way for a long time,’ she said.

‘I think it was a bad idea when President Franklin Roosevelt tried to pack the court.’

‘Well, if anything would make the court appear partisan, it would be that.

‘One side saying, ‘When we’re in power, we’re going to enlarge the number of judges, so we would have more people who will vote the way we want them to.” 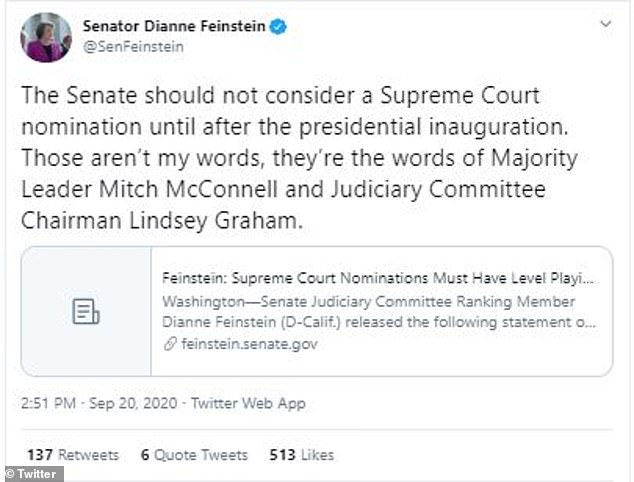 House Speaker Nancy Pelosi has not spoken about the option of court packing but has floated other measures to stop Trump plowing ahead with the Supreme Court nomination and flooding the court with more right-leaning judges.

Pelosi on Sunday refused to rule out pushing forward a privileged impeachment resolution that would have the effect of eating up Senate floor time and potentially stall the nomination.

‘We have our options. We have arrows in our quiver that I’m not about to discuss right now but the fact is we have a big challenge in our country,’ she told ABC’s ‘This Week’ when asked about the prospect.

‘This president has threatened to not even accept the results of the election,’ Pelosi continued.

‘Our main goal would be to protect the integrity of the election as we protect the people from the coronavirus.’

When pressed on the option of expanding the size of the court, Pelosi was less forthcoming.

While court packing may be a divisive move, it comes as Democrats are scrambling to prevent Trump nominating Ginsburg’s successor – something that would directly contradict the stance Republicans took back in 2016 when the shoe was on the other foot.

Justice Antonin Scalia died in February 2016 and then-President Barack Obama planned to appoint Merrick Garland to fill the position on the court.

Republicans refused to hold hearings or vote on a replacement until after a new president took office with Senate Majority Leader Mitch McConnell saying: ‘the American people should have a voice in the selection of their next Supreme Court Justice.

‘Therefore, this vacancy should not be filled until we have a new president.’

The seat was not filled and two weeks after taking office Trump appointed his own choice Neil Gorsuch to the court instead. 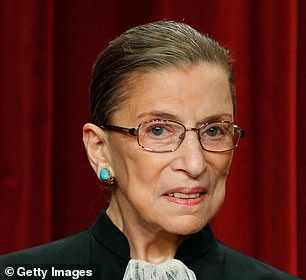 Democrats have argued Republicans set a standard in 2016 by preventing an appointment during an election year and so the standard must now be maintained.

They argued Republicans had ‘stolen’ a seat that should have been filled by Obama, and so Democrats could add more seats to reshift the balance.

In 2016, the position was empty nine months before the election, while Ginsburg died just six weeks before the nation heads to the polls.

However, McConnell issued a statement Friday after news of Ginsburg’s death broke that appeared to backtrack on his stance in 2016, saying Trump’s nominee would be voted for by the Senate.

‘President Trump’s nominee will receive a vote on the floor of the Unites States senate,’ he said.

The next day, protesters gathered outside McConnell’s home to demand he stop pushing forward with a new SCOTUS pick.

Several Democrats have said it would be hypocritical if the president filled Ginsburg’s seat on the court before the election and have pointed out McConnell’s aboutface on such a move.

‘The Senate should not consider a Supreme Court nomination until after the presidential inauguration,’ Senator Dianne Feinstein tweeted Sunday. 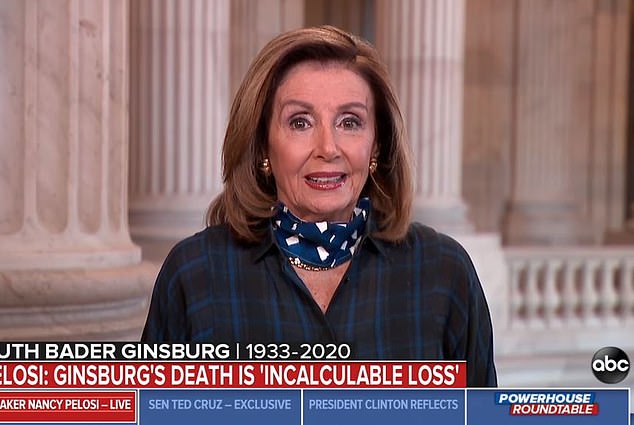 Feinstein shared McConnell’s pledge in 2016 to block the Democrats from appointing a new justice and also quoted comments made by Graham in 2018.

‘If an opening comes in the last year of President Trump’s term, and the primary process has started, we’ll wait till the next election,’ Graham said back in October 2018.

Obama on Friday penned a Medium blog paying tribute to Ginsburg and insisting Trump must not appoint a new justice until after the election because the Republicans refused to allow him to do the same thing back in 2016.

‘Four and a half years ago, when Republicans refused to hold a hearing or an up-or-down vote on Merrick Garland, they invented the principle that the Senate shouldn’t fill an open seat on the Supreme Court before a new president was sworn in,’ he wrote.

‘A basic principle of the law — and of everyday fairness — is that we apply rules with consistency, and not based on what’s convenient or advantageous in the moment… As votes are already being cast in this election, Republican Senators are now called to apply that standard.’

The only other time court packing has been attempted was in 1937 when President Franklin D. Roosevelt tried and failed to make the major change to the Supreme Court.

Roosevelt’s plan was seen as a move to pass his unpopular New Deal laws.

In 1935, the Supreme Court had struck down three of his New Deal laws.

The House, Senate and White House were all Democrat-controlled but the court was led by 75-year-old Republican Chief Justice Charles E. Hughes and many of the older appointees voted down the laws, because included in one of them was a cut in Supreme Court pensions.

When Roosevelt won a second term in 1936 and soon after he proposed a new bill called the Judicial Procedures Reform Bill of 1937 to expand the bench from nine to 15 justices, saying there was a need for an ‘infusion of new blood in the courts’.

The addition of six justices coincided with the number of justices over the age of 70 currently serving on the court.

Critics slammed the move, accusing Roosevelt of fixing the court with people likely to push through his laws.

Both Republicans and Democrats – even Roosevelt’s vice president John Nance Garner – were largely opposed to the plan and the bill to shake-up the court ultimately failed.

However, by the end of his second term, three justices retired and two died, meaning Roosevelt was able to replace all five.

Throughout his White House tenure, the president had appointed nine justcies to the court. 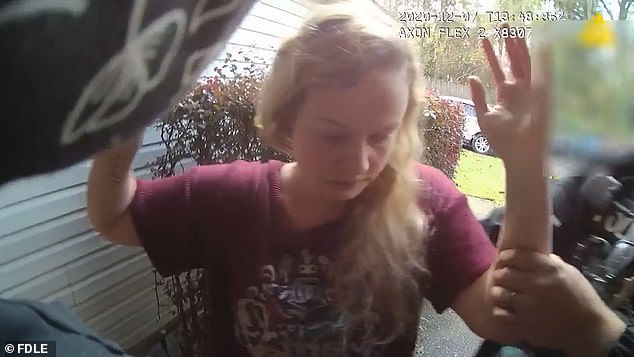 Karla Martínez on TeletónUSA: “In months we knew what it was like not to go out, these children feel it all the time” | The State 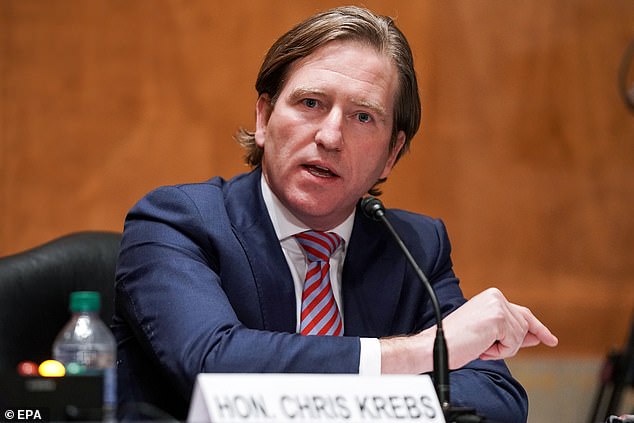