This is the moment an Amazon delivery man was chased down a garden path and out of the gate – by two pint-sized Border Terrier puppies.

Dog owner Katy Ringsdore, 36, from Marsh in Devon, had ordered a candle from Amazon.

The delivery driver rang the doorbell, activating the front door security camera, and alerting the brother and sister puppies to his presence. 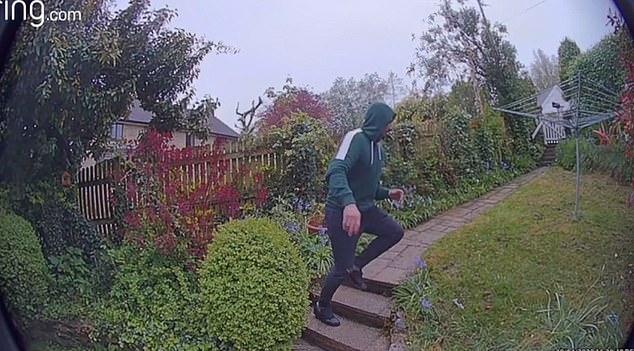 Footage captured on the doorcam, shows the delivery man hear the dogs barking and, thinking they are dangerous guard dogs, fleeing in terror.

Suddenly, two small Border Terrier puppies, Teddy, 2, and Betty, 1, fly out from the house and chase him down the garden path.

As he runs, the delivery man looks behind him and stumbles before picking himself up again and slipping out the gate.

Katy, hearing what was happening, went out to check on the driver.

She said he was unhurt and came back into the garden, ending up with the puppies sitting on his knee.

She told MailOnline: ‘I heard the dogs barking and they don’t normally bark that long so I went out to check what was going on.

‘The poor chap was just getting up from his feet at that point. 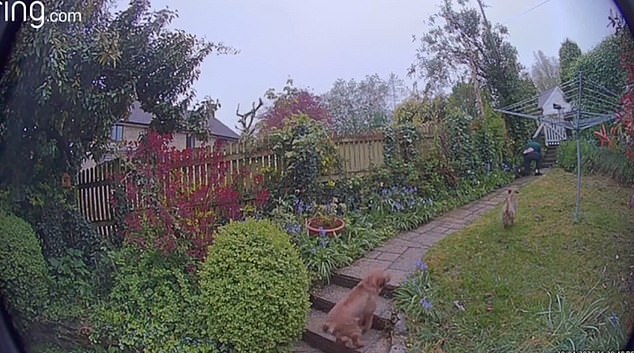 Two Border Terrier puppies, Teddy and Betty, fly out from the house to give the delivery man an overexcited welcome. He stumbles as he runs before picking himself up again slipping out the gate

‘I offered him a cup of tea and he came back into the garden and the dogs were licking him.

‘He wasn’t hurt at all, he was absolutely charming, he was laughing his head off.’

‘At the end of it the dogs were sat on his knee!’

She explained that although they may sound fierce, they are very friendly animals.

‘They bark a lot because they’re terriers, it’s part of their breeding, but they lick you to death,’ she said. ‘They are incredibly friendly.

‘Anyone who comes to the door, they think people are there to see them, not for any other reason!’

The footage was shot during lockdown, on April 14. 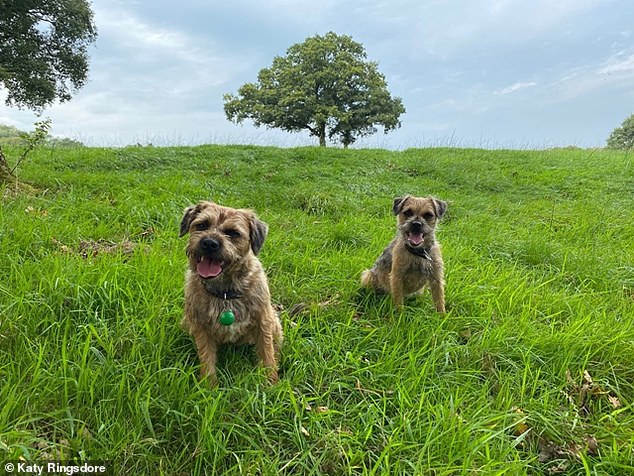 Owner Katy Ringsdore, 36, said that when she went to check on the noise she found the delivery man laughing and the puppies licking him all over.  Pictured: Brother and sister, Teddy and Betty, the Border Terrier puppies