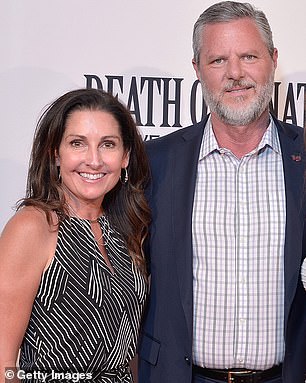 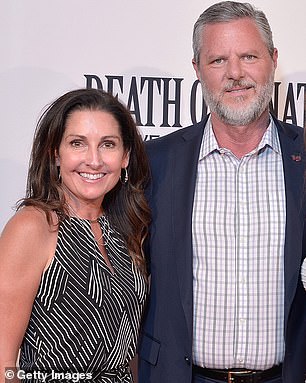 Jerry Falwell Jr and his wife Becki in 2018

The former Miami pool boy whose affair with Jerry Falwell Jr’s wife led Falwell to resign as president of Liberty University has spoken out in a new interview.

Giancarlo Granda, 29, provided years of text messages and emails to back up his account in an interview with the Washington Post published on Friday.

Granda says he had a six-year affair with Falwell’s wife Becki that began when they met in Miami in 2012, when he was just 20 and was working as a pool boy.

He claims that Jerry knew about it and watched them had sex the first time, then continued to give his blessing to the affair for years afterwards. Jerry acknoledges the affair, but vehemently denies that he participated in or knew about it.

‘I was groomed,’ Granda said in the new interview. ‘And before I knew it, I was trapped.’ 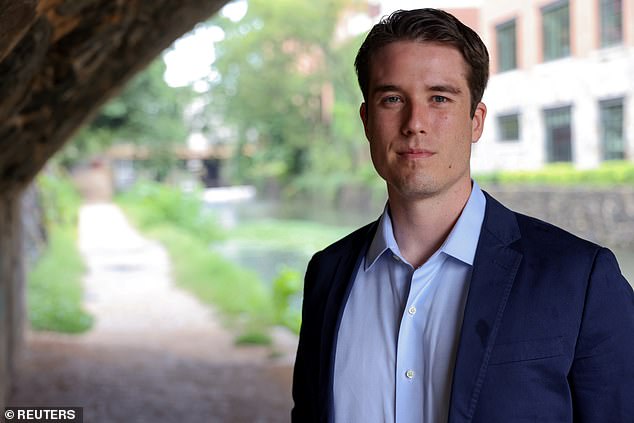 Giancarlo Granda, 29, provided years of text messages and emails to back up his account claiming that Falwell Jr knew of the affair and approved 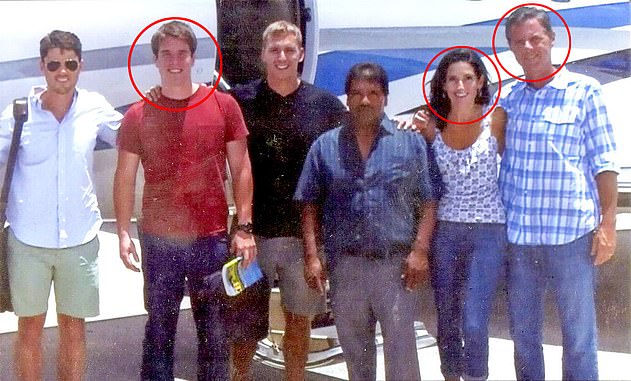 The incident followed Falwell’s resignation from Liberty University following a claim from a former poolboy Giancarlo Granda that he had an affair with Becki Falwell for years with the consent of her husband. Pictured, Giancarlo Granda left with the Falwell family

Granda, who now lives in the Washington area and recently earned a graduate degree from Georgetown, said his involvement with the Falwells ruined his relationships with girlfriends, and even led him to contemplate suicide.

‘I’ve been living with this hell for so long,’ he said. ‘I just want to get out.’

In late 2018, after Buzzfeed published an article about his strange business deal with the Falwells, in which they co-owned a commercial property in Miami, Granda flew into a panic, fearful that the affair would be exposed.

‘My life is absolutely ruined,’ he texted Becki in December of 2018 along with a photo of the article, according to the Post. He threatened suicide.

‘When they find my lifeless body hanging in the woods, please make sure Logan is returned to my family,’ he wrote, referring to his dog. ‘Goodbye.’ 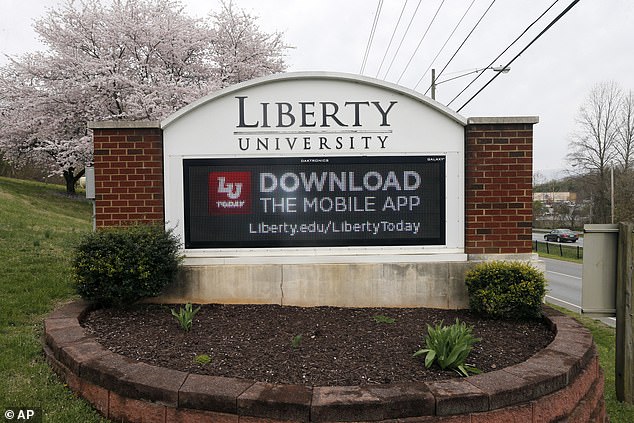 Falwell resigned from the university on August 25 following the pool boy controversy, as well a list of other recent scandals, many of which also appeared to involve alcohol

Other evidence provided by Granda to the paper included what appeared to be a screenshot of a Facetime conversation, seemingly showing Jerry looking on as Becki conversed with Granda while topless and drinking a glass of wine.

That photo, and others described by the Post, were not published by the newspaper.

Last month, Jerry claimed someone stole the photos of Becki from his phone. In a later interview, he accused Granda of selling the photos to a family that was suing the Falwells over a dispute involving the Miami property.

The reported text message exchanges between Granda and Becki show an often affectionate relationship over the years. 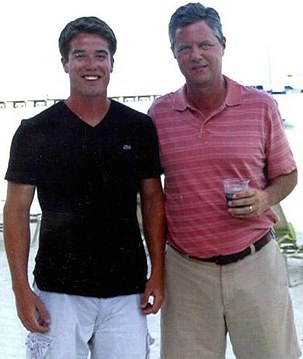 Falwell, one of the most influential right-wing Christian leaders in the United States, is pictured with pool boy Granda

‘Good morning beautiful,’ he replied the next day.

‘Good morning gorgeous,’ she texted back.

Over the summer of this year, business disputes over the jointly owned property seemed to devolve, with Granda demanding a buyout, which they apparently refused.

‘Since you’re okay with ruining my life, I am going to take the kamikaze route,’ he wrote Jerry in June. ‘It really is a shame because I wanted to reach a peaceful resolution and just move on with our lives but if conflict is what you want, then so be it.’

Granda texted a photo of himself in front of a microphone, recording a podcast.

‘You should by now understand that I will not be extorted,’ Jerry replied. ‘I have always treated you fairly and been restrained in response to your threats because I did not wish to ruin your life. Going forward stop contacting me and my family.’

Granda told the Post that he was emboldened to go public with his claims after Falwell drew backlash for posting a photo of himself at a costume party with his pants unzipped and his stomach showing, appearing to hold an alcoholic drink. 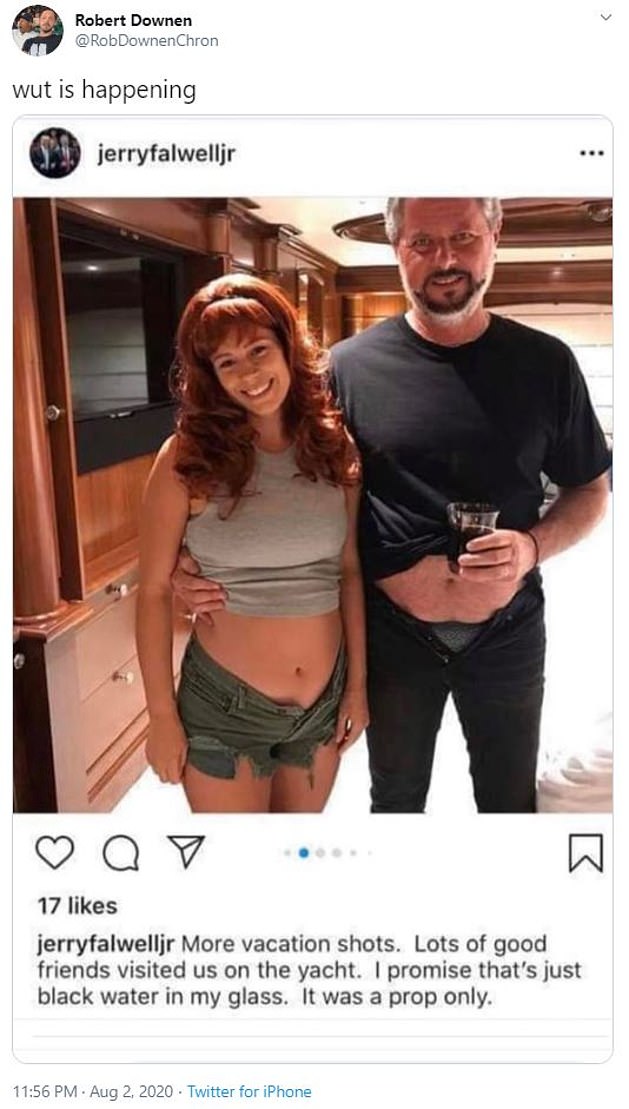 In August, Falwell was blasted as a hypocrite for posting a this pictured on Instagram with his pants unzipped and midriff exposed, while appearing to hold a glass of alcohol

The final communication between Granda and the Fallwells reported by the Post came on August 24, after Reuters published an article exposing the affair.

‘I hope you’re happy and that you were paid very well,’ Becki wrote to Granda. ‘Jerry just resigned.’

Earlier on Friday, it emerged that just days after Jerry resigned, Becki made a 911 call saying that he was losing ‘a lot of blood’ after falling down the stairs and hitting his head on a trash can while drunk.

In the call from Bedford County, Virginia, on August 31, Becki Falwell tells a dispatcher that her husband was bleeding heavily and would not go with her to the hospital, according to the Huffington Post.

First responders arrived to find Falwell with lacerations under his left eye, across the bridge of his nose, and above both his right and left eyes, as he slurred his speech with empty alcohol containers nearby.

The call, obtained by the Huffington Post through a Freedom of Information request, took place on August 31, a week after Falwell was forced to move aside as president of the evangelical university founded by his father Jerry Falwell Sr.

Residential students of Liberty University sign an honor code that prohibits sex outside of marriage, as well as consuming alcohol. 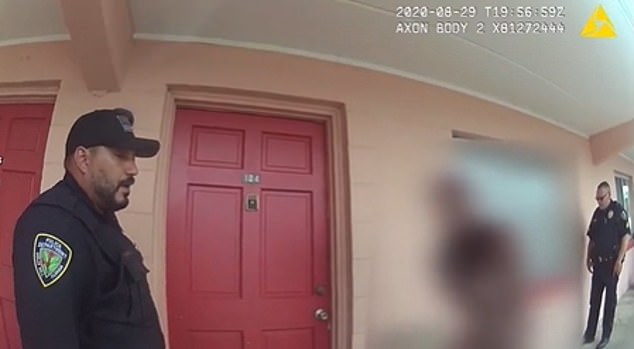 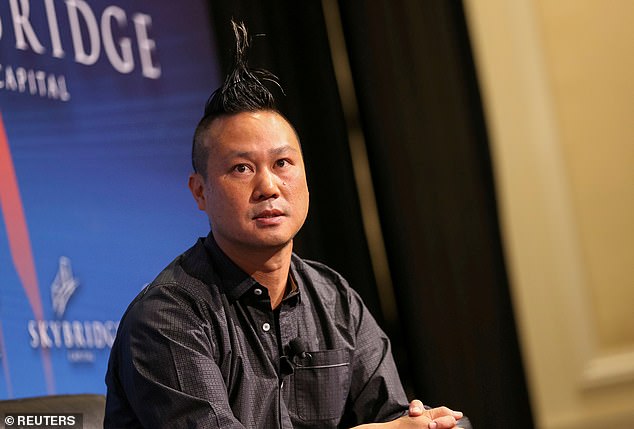