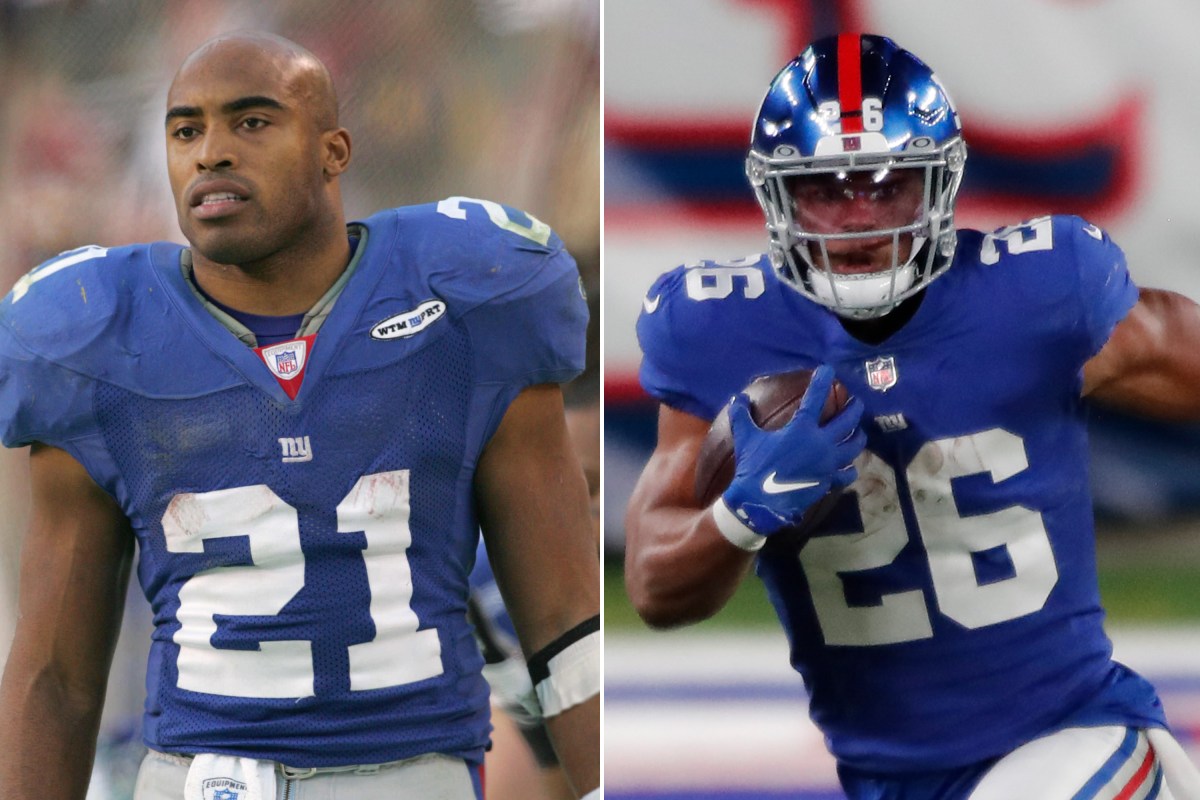 He caused a stir.

“How did I cause a stir?’’ Tiki Barber asked.

Because you made critical remarks about an aspect of Saquon Barkley’s game.

“I just reported what I see,’’ Barber told The Post on Wednesday. “My philosophy is: Your critics are your friends, because they show you your faults. So don’t get mad about it, fix ’em.’’

There it is. The best possible advice for the Giants’ most gifted player. Fix what is wrong.

“There should be no heat on Saquon,’’ Barber said. “He’s gonna be a great player. But if he wants to be on the field on third down in obvious blitz situations, you got to be a pass protector, period. And I know for a fact Joe Judge is telling him the exact same thing.’’

How can Barber know this?

“You’re a head coach and you watch a running back miss a pass block, you can’t let your quarterback [get] hit. Running backs who let their quarterbacks get hit don’t play.’’

Barber is the greatest running back in franchise history — he has 10,449 rushing yards, and no other Giants runner has 7,000 — and what he says carries weight. He took a look at the horror show what was Barkley’s 2020 season debut and did not go off on the eyesore that was 15 rushing attempts for 6 yards in the 26-16 loss to the Steelers. That can happen when the blocking is crummy. Barber knows that. What Barber did not like, at all, was the way Barkley struggled in pass protection. A blatant Saquon whiff led to a Daniel Jones sack.

“He might not be an every-down back,’’ Barber said on the “Tiki and Tierney’’ show on CBS Sports Network. “He cannot pass protect, and it’s starting to become glaring.’’

Barber on the radio also said, “Saquon’s a big man. He doesn’t want to hit anybody.’’

That last one sounded a harsh.

An inexact poll the past two-plus years puts Barber’s positive comments about Barkley at about 95 percent. So he has no ax to grind here. He gets paid to analyze and opine, and he is certainly not some shallow talking head. He has been there, done that on the field.

And he was a pretty lousy pass protector when he entered the NFL — a problem for a second-round pick who was supposed to fill a third-down back role. It took him time to get it right. He added strength — a whole bunch of strength — and gained the trust of his head coach, Jim Fassel, proving he could protect Eli Manning.

The running backs coach, Jim Skipper, instructed Barber to strike the defender with the same foot and the same shoulder, otherwise Barber’s body would pivot. Fassel told Barber he needed to strike more forcefully, so Barber took boxing lessons to help with his body leverage.

“It’s part technique and honestly, it’s a lot of want-to,’’ said Barber, now 45. “You got to stick your face into somebody’s chest.’’

Rookie Mekhi Becton only Jet to kneel for national anthem

Judge keeps his criticisms private, and, when given the opening, he did not take the bait and lash out at Barber, most likely because he knows there is truth in what Barber says.

“Look, people pay a price to watch us play, everyone’s opinion is valid if they’re a fan,’’ Judge said. “We’ve got to make sure on the inside we understand what we’re doing, and we prioritize what we have to work on.

“I respect Tiki, obviously he’s a guy that knows the game. He’s been a great player for this organization. But we’re going to go ahead and make sure we get everybody rising up.’’

Judge also said, “We’ve got to do some things to help Saquon throughout the game.’’

Perhaps a tight end is needed to help Barkley slow down a pass rusher. If Barkley cannot do it, maybe he gets split wide on third down and veteran Dion Lewis is put in the backfield to pass protect.

“Again, I preface this, he’s an unbelievable player,’’ Barber said. “But right now his pass protection is lacking.

“When you see someone [in] the hole, in your mind it’s a decision that has to be made. That’s my guy, I know it’s my guy, I have to hit him. I have to stop his momentum so I can protect my quarterback. It’s a mentality. You have to be aggressive, you have to be mean, you got to be physical.’’

Barkley needs to be on the field all three downs. He needs to fix this.

Brett Rypien will start for Broncos against Jets

Listless Jets offense on the brink of a Jamison Crowder boost

What’s next for Titans, Vikings after COVID-19 outbreak