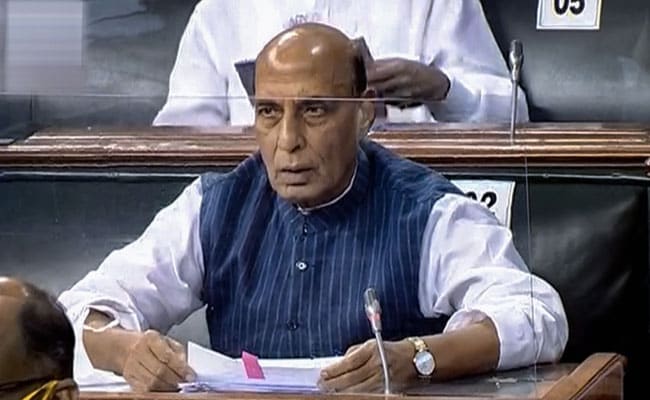 Rajnath Singh spoke in the Lok Sabha on the India-China standoff on Tuesday. (File)

Questions by the opposition in parliament on the India-China tension in Ladakh are expected to be answered by Defence Minister Rajnath Singh on Thursday, with the government finally agreeing to give clarifications in a session that has seen uproar over shrinking opportunities for discussions.

Mr Singh is expected to speak in the upper house Rajya Sabha around noon on what the government calls China’s provocation along the de-facto borer between the two countries called the Line of Actual Control or LAC and India’s response.

The Defence Minister spoke on the subject in the Lok Sabha on Tuesday, saying India is “very serious about issues of sovereignty” and the country is prepared for “all contingencies” to ensure that it is maintained.

Detailing a key meeting between him and his Chinese counterpar at the Shanghai Cooperation Organisation (SCO) meet hosted by Russia, Mr Singh said he made it clear that India wants to resolve this issue in a peaceful manner and “want the Chinese side to work with us”. But “there should also be no doubt about our determination to protect India’s sovereignty and territorial integrity,” Mr Singh told parliament as it resumed after more than five months.

The repeated Congress attacks on the issue made it a prime subject for a government statement as parliament resumed for monsoon session on Monday.

However, the government’s refusal to a discussion after the minister’s statement, in view of the “sensitivity” of the matter, led to a Congress walkout.

The party, which had repeatedly demanded that the government explain the “real situation” in Ladakh, on Tuesday carried placards that read, “We want a discussion on China and PM must answer”.

As the Speaker refused to allow the party’s leader in Lok Sabha Adhir Chowdhury to speak, the Congress members staged a walkout to register their protest.

The face-off with China had rapidly escalated and on June 15, 20 Indian soldiers were killed in the line of duty – a first in more than four decades. Even after that, there have been repeated attempts by the Chinese troops to recapture the heights occupied by the Indian soldiers.

China Ropes In More Countries For Its COVID-19 Vaccine Trials

Thailand to slowly restart tourism with flight from China