Home » Big Story » “Not Begging For Alms”: Covid Patients At UP Hospital Complain About Food 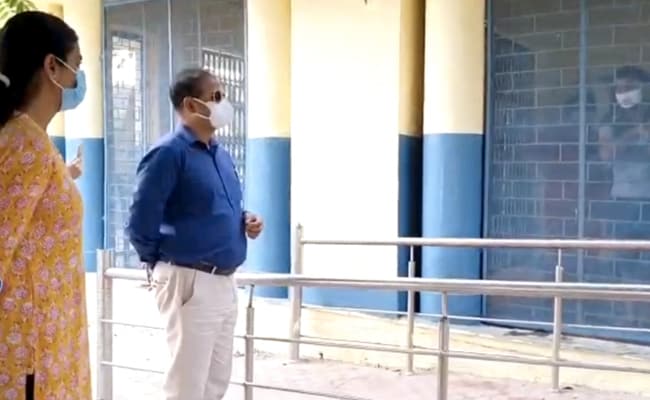 A senior administrative official in western Uttar Pradesh’s Bulandshahr district went on an inspection of the government-run SSMJ Hospital – a L1 facility for asymptomatic Covid patients – in the town of Khurja on Tuesday evening.

The official – District Magistrate Ravindra Kumar – decided to take the media along. What followed was a striking conversation with a group of patients (with social distancing protocols followed) about the quality of food.

Some patients also said they were made to feel like beggars.

“I asked for milk and the response from someone sitting here in the corner was – ‘kya shor macha rakha hai (what a fuss you are making)’. So I said ‘shor nahin macha rakha hai (I am not making a fuss)’. I am asking for food for my child, I am not begging you for alms,” a patient told the district magistrate.

“I can get 500 litres milk here… I am from a well-heeled family but at the moment I am helpless. I will leave in a day or two but I request you, with folded hands, that better food arrangements should be made,” the patient added.

Mr Kumar asked officials accompanying him where the patients’ food came from. The response, captured on a video shot with mobile phones, was inaudible. The official then asked patients what they got for food.

“In the morning we get dalia in polythene bags. One day there was halwa with chana,” a patient replied

Teaching union chief admits ‘schools are as SAFE as possible’

“Why do you give food in polythene bags? Why don’t you give packed food?” the district magistrate asked the officials again. The response, again, was inaudible.

“Sir, the dal is also very watery. The quality is just too bad. How much should I complain?” another patient asked.

“The CMS came for an inspection yesterday. Did he take any feedback from you?” Mr Kumar then asked the patients. The reply – no, he did not.

“There will be improvement in the food. There are middlemen… that is why there is a problem. If the doctors do not come on two rounds every day, all my control room and I will get things sorted,” the district magistrate assured patients before leaving.