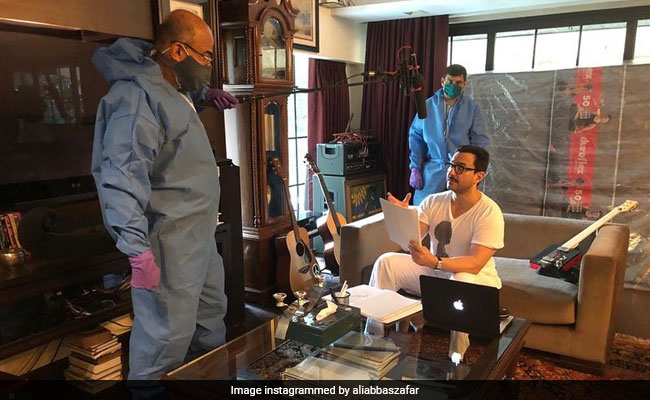 Work-from-home has been keeping actor Saif Ali Khan busy, whose latest schedule included a dubbing session with sound designer Dilip Subramaniam. Photos of Saif’s work-from-home scene have been shared by filmmaker Ali Abbas Zafar, who is directing the actor’s upcoming web-series, yet untitled. “Dubbing in the time of Covid-19. Saif Ali Khan with Dilip Subramaniam,” wrote Mr Zafar. He shared glimpses of “the new way of working” adopted by stars during the coronavirus pandemic. In the photos, Saif can be seen perched on his sofa with a script in his hand while the dubbing crew, wearing PPE kits, were busy assisting him from a distance.

So, here’s how Saif Ali Khan’s work-from-home scene looks like:

Saif Ali Khan’s Amazon Prime web-series was assigned the working title Tandav, after which the title Dilli was being considered but no official announcement has been made yet. The web-show will be a political one and is also said to star Sarah Jane Dias and Dimple Kapadia. Saif had made his web-series debut with Netflix’s Sacred Games.

Saif Ali Khan and Kareena Kapoor, parents to son Taimur, recently announced they are expecting a new member to join their family of three. Kareena, who is pregnant with her second child, too is busy working from home.

Professionally, Saif Ali Khan has films such as Adipurush and Bunty Aur Babli 2 in his line-up.

Genelia Deshmukh: If I’m coming on screen after so long, the project needs to be worth… have no perception of not playing a mother or my age on screen