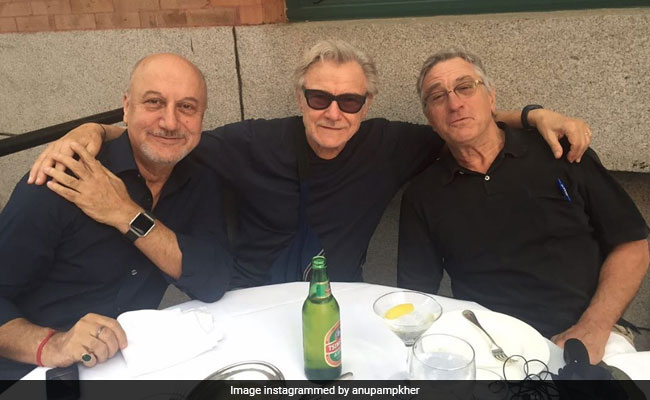 Anupam Kher’s photos with Robert De Niro always come with interesting anecdotes and he happened to add one more to the list. But this time, Anupam Kher’s story had an added guest – veteran Hollywood actor Harvey Keitel, who featured in critically acclaimed films such as Taxi Driver, Reservoir Dogs, Pulp Fiction, The Grand Budapest Hotel and The Irishman, also starring Robert De Niro. Talking about one of his meetings with Robert De Niro in new York, Anupam Kher wrote: “Every meeting with him feels like a landmark. He met me in the lobby of the hotel wearing a black shirt. Secretly I was happy that I was also wearing a black shirt. He said ‘Let’s go for a walk’. For a walk? Just the two of us? Wow! After walking a couple of blocks he got a call and I heard him saying in the phone, ‘Sure we will join you. Yes! It’s me and Anupam!’ He continued speaking in the phone.”

Little did Anupam Kher know that he was going to be spending the evening in the company of not only Robert De Niro but also his Taxi Driver co-star Harvey Keitel: “I was thrilled. Then he asked me if I mind having a beer with him and his friend? On that day I realised what it actually means to be saying ‘I have no mind to mind.’ Then on a road side cafe I saw a gentleman waiting for us. Also wearing a black shirt. I am introduced to this familiar face behind the glasses by Mr De Niro. And it is the legendary actor Harvey Keitel. The rest of the evening for me was in slow motion,” he wrote.

Meanwhile, this is how Anupam Kher had wished Robert De Niro on his birthday this year:

Shashi Tharoor trolled Anupam Kher on an old tweet, got a befitting reply

Anupam Kher and Robert De Niro co-starred in 2012 movie Silver Linings Playbook, featuring Jennifer Lawrence and Bradley Cooper as leads. Since then, the two acting legends have caught up in New York every now and then.

Gateway is back, and it’s selling AMD-powered budget laptops at Walmart

Indian actors are making waves in the west, but are we too quick to judge their screen time?

Anupam Kher defends Mahesh Bhatt in Sushant Singh Rajput case, says – I am not blind, I will not talk until anything is proved

Shashi Tharoor trolled Anupam Kher on an old tweet, got a befitting reply

Anupam Kher, furious at those who demean the country for lockdown, said – Hey fools, be ashamed