Married former Florida Democratic gubernatorial candidate Andrew Gillum came out as bisexual in an interview with Tamron Hall on Monday.

‘You didn’t ask the question but I don’t identify as gay. I identify as bisexual. I’ve never shared that publicly before,’ Gillum, once considered a rising star of the Democratic party, said.

The bombshell admission came as part of Gillum’s first interview since the ex Tallahassee mayor was found ‘inebriated’ in a South Beach hotel room in March, along with a male escort who overdosed on crystal meth.

Gillum’s wife, R. Jai Howard, also spoke during the interview about her husband’s struggles and her acceptance of his sexual identity.

The 41-year-old father-of-three entered a rehab facility to deal with alcohol abuse shortly after the incident and revealed to Hall that he has ‘cried every day’ since his sudden fall from grace. 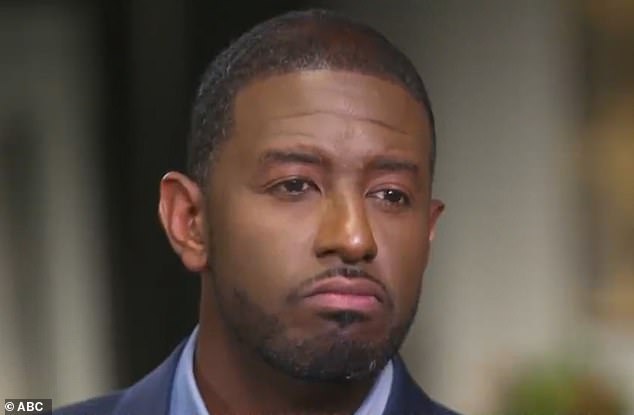 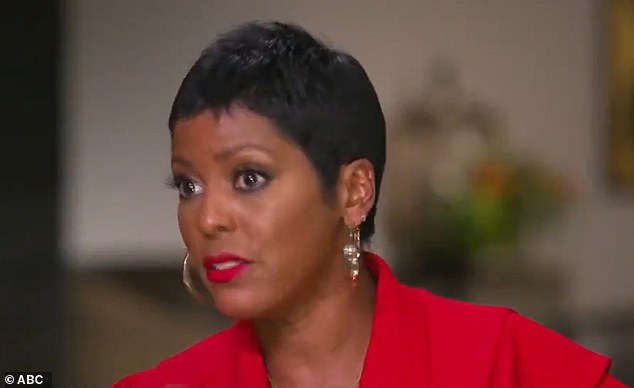 Gillum told Tamron Hall, pictured, that he was shown to be ‘at his most vulnerable state’ at the time of the incident

During the hour-long segment, Gillum revealed that his downward spiral first began after his close loss to Ron DeSantis in the 2018 Florida Governor’s race, where he began drinking heavily – even putting whiskey in his morning coffee.

He reportedly refused direction from his wife to seek counselling for depression, and quickly his relations became strained with family members too.

In March, he went to Miami to attend a wedding with his wife, but ended up meeting up with escort Travis Dyson, an acquaintance he’d known for a matter of months.

Gillum said he had been drinking before meeting his friend and continued drinking in a room at the Mondrian South Beach Hotel with Dyson before blacking out for three hours.

The next thing he remembered, he said, was waking up to be surrounded by police and being told Dyson had overdosed.

Police photos show Gillum unconscious and naked with Dyson surrounded by a slew of drugs, both prescription and illegal, inside the swanky $220-per-night hotel room.

Gillum denied he and Dyson shared a romantic or sexual relationship. He also denied taking any drugs, but admitted having ‘too much to drink’.

In response, Hall asked Gillum why he was in the hotel room in the first place.

‘I would say the reason why I went to that room was probably no different than how anybody might communicate with someone that they are in a friendship relationship whatever with. I understand very well what people assume about that.’ 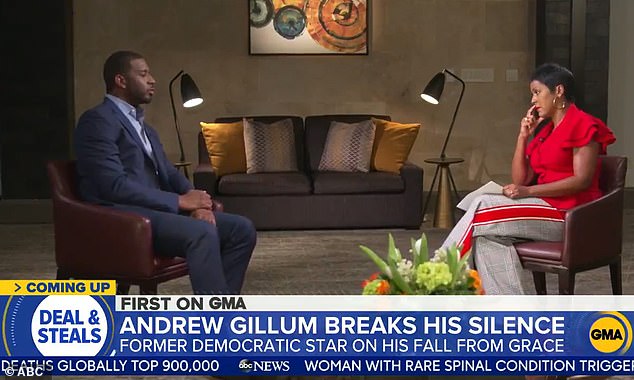 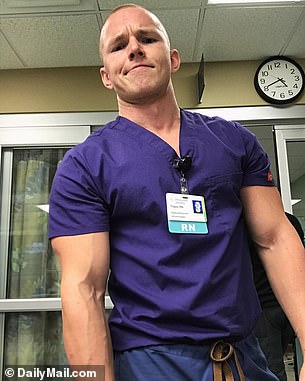 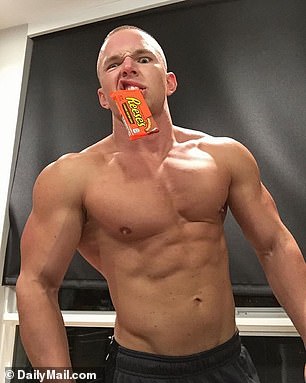 Dyson describes himself as a trauma certified ER nurse on social media, where he posts photos of himself working out in the gym, partying at gay nightspots and lounging on luxury yachts 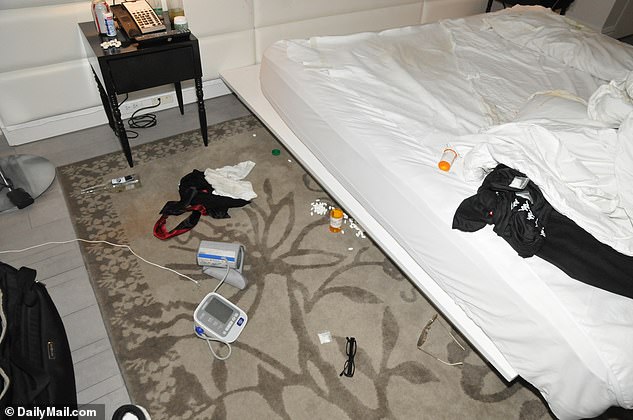 Dozens of white pills can be seen scattered on the floor and bedside table alongside empty containers of citalopram, an anti-anxiety medication, and gabapentin, which helps combat seizures and nerve pain, as well as an empty Corona beer bottle

Gillum also spoke candidly about the photographs revealing him in a compromising position.

‘When that photo came out, I didn’t recognize the person on the floor,’ he said.

‘That was not anything more than a person being at their most vulnerable state, unconscious, having given no consent, and someone decided to use a moment where I was literally lying in my own vomit.’

When officers arrived at the hotel, Gillum was so intoxicated he could not communicate, police said.

Cops found a substance in the room that appeared to by crystal methamphetamine, but Gillum was not charged with a crime.

A third man who was present, Aldo Mejias, 56, told officers that Gillum and Travis Dyson had been ‘under the influence of an unknown substance’, according to a police report obtained by DailyMail.com. 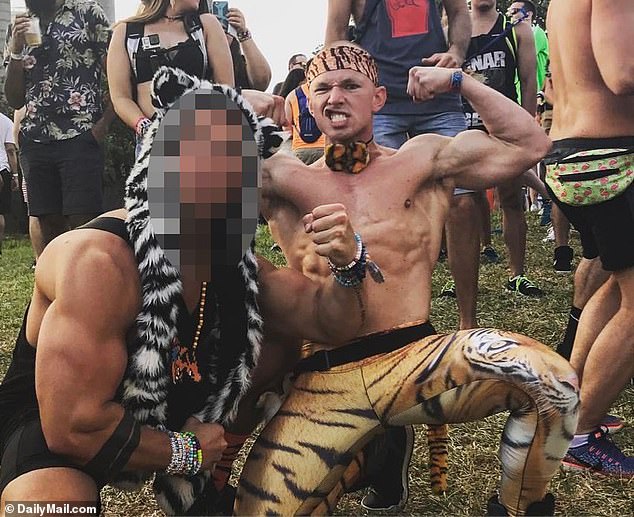 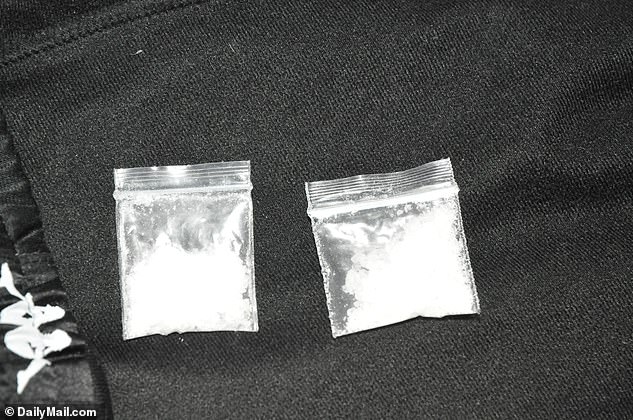 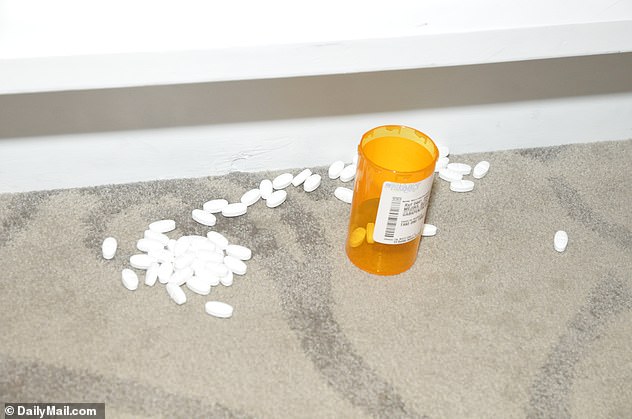 Exclusive images show the slew of drugs, both prescription and illegal, found inside the swank $220-per-night hotel room, including three bags of what police believe was crystal meth 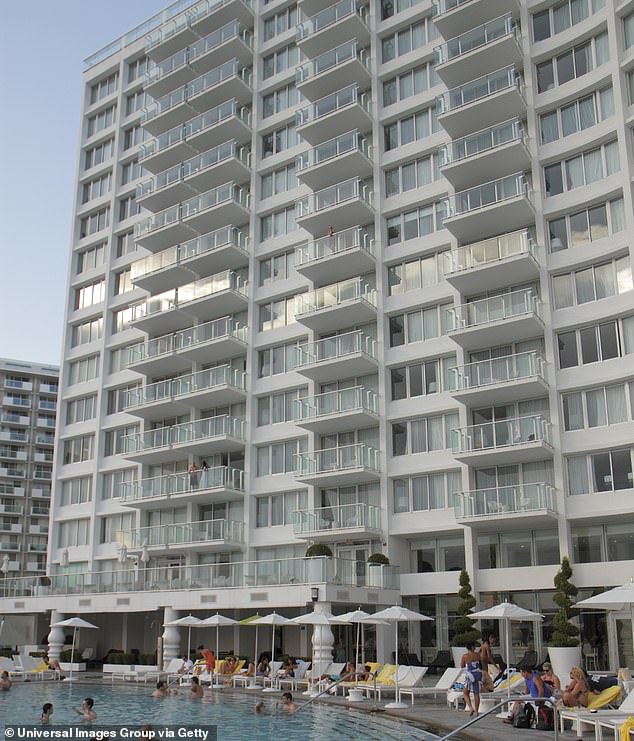 Dozens of white pills were scattered on the floor and bedside table alongside empty containers of citalopram, an anti-anxiety medication, and gabapentin, which helps combat seizures and nerve pain.

A small bottle of an injectable medicine containing alprostadil, typically used to treat erectile dysfunction was also found at the scene.

Beer bottles and sheets covered in bodily fluids could also been in the photos, obtained from police under Freedom of Information law.

The report also noted that Gillum, a former Tallahassee mayor and regular CNN contributor, was seen vomiting in the bathroom and required a welfare check to see if he was okay.

He had reportedly ignored more than 50 calls from his wife that night, R. Jai said.

On account of her husband’s sexuality, R. Jai said she that most people ‘don’t understand bisexuality.’

‘Bisexuality is just something different,’ she continued. ‘I just believe that love and sexuality exist on a spectrum. All I care about is what’s between us and what agreement we make.’

Gillum called the incident a ‘wake-up call’ and said he remains hopeful of redeeming himself.

‘I’m still here by the grace of God. So much of my recovery has been about trying to get over shame. Shame is not that I did that, but I am bad.’ 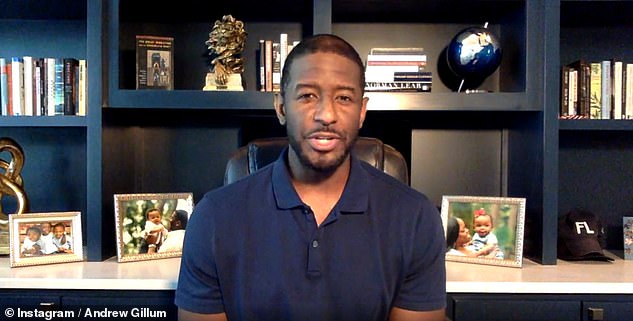 Gillum had remained silent since a March incident involving a man who reportedly overdosed in a South Beach hotel room. He finally spoke out on his Instagram page in July, pictured

In July, after leaving his rehab program, Gillum posted a video to social media giving his supporters an update on his health.

‘I had totally underestimated the impact that losing the race for governor had had on my life and on the way that those impacts started to show up in every aspect of my life,’ he said.

‘I didn’t want to talk emotionally or very deeply about what had happened in the race for governor because it was a constant reminder of failure and my own personal failures.’ 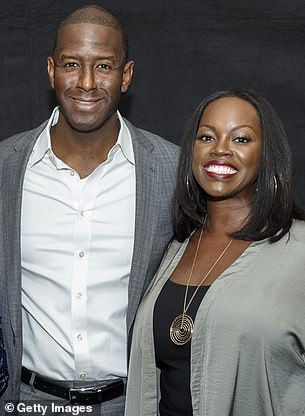 Gillum, who is married with three young children, denied using any drugs but admitted to having ‘too much to drink’ (pictured with his wife R. Jai Howard)

He also told how his wife, had stood by him in the months following.

‘I totally underestimated the impact that losing the race for governor had on my life, and on the way that those impacts started to show up in every aspect of my life,’ Gillum said.

‘It was a constant reminder of failure and my own personal failures… It was a reminder that I had let so many people down.

‘All of that was all of a sudden gone, and caused me to think about my own purpose, and my own value and what I could contribute if anything,’ he said. ‘I didn’t want to face any of those things so I numbed. I tried to suppress. I tried to ignore.’

Gillum went traveling, made public appearances and sat for TV interviews, posting on Instagram and Facebook ‘as if I was living my best life.’

He expressed remorse for what he did and acknowledged that his feelings of guilt were normal.

But he said the public shame that he also felt hit him in a ‘completely different’ way that ‘cuts you.’

‘My stuff had to be public and cause great embarrassment and rumors, some false, some true, the shame that I felt from all of that… was tearing me up,’ Gillum said. ‘I needed real help to try to unpack that.’ 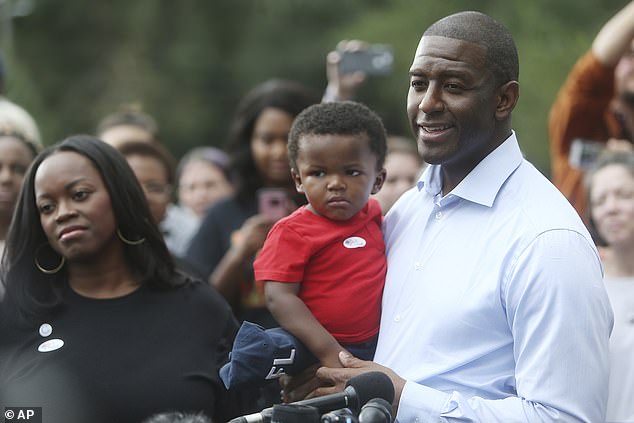 Andrew Gillum, the former Democratic candidate for Florida governor, was named in a police report saying he was ‘inebriated’ and initially unresponsive in a hotel room in March this year

Gillum revealed that his father also suffered from alcoholism and died from complications related to ‘that deadly addiction.’

‘I went away to rehab to focus on my issues with alcoholism, having grown up in a household where my father battled addiction to alcohol, and later died from that addiction,’ Gillum said in the July video. ‘I knew well the toll it took on my father’s dreams and ambitions.’

In the video, he urged others struggling with alcoholism or depression to seek help. He explained that he turned to therapy address his problems.

‘All of us are struggling and trying and clawing at trying to be something else when we really ought to be trying to be at home in ourselves. That is the journey I am on right now … not having to be one thing in one place and one thing somewhere else,’ he said.

‘With a lot of encouragement from family and the people who love and care about me, I also got into therapy, where I could start to talk through what was going on with me,’ Gillum said.

‘I knew if I had not dealt first with issues and addiction and the numbing that I chose with alcohol, there was no way I could start to pull back the layers and talk about what was truly happening underneath.’ 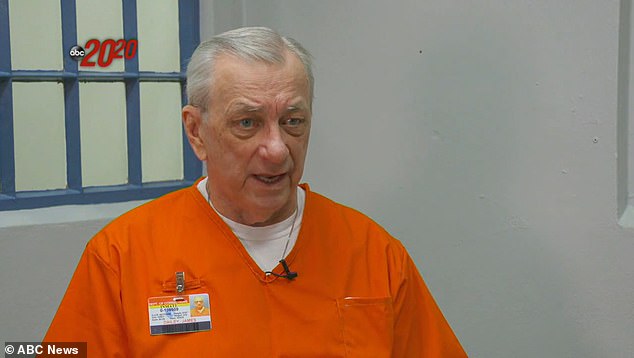